It’s hard to avoid drawing a comparison so I’ll just say it out-right — Super Cane Magic ZERO looks and feels like a spiritual sequel to the 2008 classic, Castle Crashers. They’re both 2D hack-and-slash adventures with four player local co-op and have wacky art styles to boot. Super Cane Magic ZERO takes a couple of risks to distinguish itself, mainly by embracing what can only be described as a persuasive, super weird sense of humour. Your enjoyment depends entirely on your appreciation for this humour, which may prove to be far too zany for some.

In the world of WOTF (an acronym that is never explained), a powerful cake wizard has died, and now his dog has inherited his magic, gaining the ability to rain down giant desserts upon the land whenever it barks. Your mission, as an alien that crash lands in WOTF, is to put an end to this dog’s reign of terror. Believe it or not, things only get weirder from here.

The rest of Super Cane Magic ZERO is every bit as peculiar as that plot description. There’s talking dogs, a village made of Pop Tarts, and a skill tree about “Dogmancy.” WOTF’s currency takes the form of salami slices. When killed by an enemy, they taunt you by saying, “Rekt.” Even the loading screen tips are nonsensical, with one directly addressing somebody named Arnold, and another warning about the dangers of playing this game while traveling through space. It’s all very quirky and meta, and the humour is delivered with a confident self-awareness. Combined with the cartoonish art style and a cast of characters that look as if they’ve been ripped from the panels of internet comics, this works for the most part. But such humour is so overpowering that it makes or breaks the experience; either you’re totally on-board with it, or you’re not.

As a hack-and-slash, Super Cane Magic ZERO pits you against plenty of foes. There’s an impressive range in their variety. Every area has its own distinct set of enemies, both in terms of visuals and mechanics. For example, the forest hunters can lay down traps, whereas the volcanic employees of the Lava Bakery explode upon death. To even the odds, you have 15 unlockable characters to choose from and a huge assortment of weapons and armors to collect. Further customization is done through leveling up and upgrading several skill trees. This makes for an addicting gameplay loop; fight enemies for experience points and better loot, allowing you to fight harder and harder enemies — which is why it’s a little puzzling that Super Cane Magic ZERO complicates its simplicity by focusing on two cumbersome mechanics. 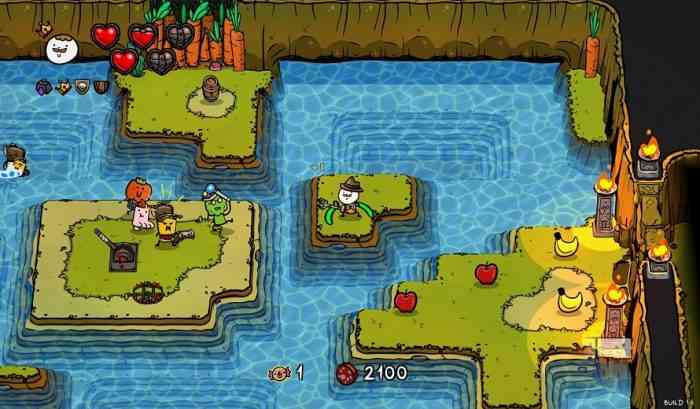 The first of these is the ability to throw enemies. Once an enemy takes enough damage, it lies on the ground, stunned. It can then be picked up and thrown against a wall or other enemies to deal additional damage. However, this is less of an option but more of a requirement. Stunned enemies are otherwise invulnerable to normal attacks, so you must wait for them to recover before continuing to attack. And if you miss the window to pick them up, they become enraged, making them much more dangerous.

The second mechanic is eating. Gulping down food is a must, as running out of lives sends you back to the beginning of a level, resetting all your hard-earned progress. But the amount of health gained per food item is so miniscule that the bulk of my time wasn’t spent fighting or exploring, but running around scavenging for more food. It also doesn’t help that the bonus effects from eating are poorly communicated and seemingly negligible. Considering that Super Cane Magic ZERO is a 20-hour long game, having to constantly stop the flow of combat just to eat or throw stunned enemies is an act that quickly grows stale.

With a Little Help From My Friends

It’s worth noting that these issues are not as pronounced in multiplayer, as Super Cane Magic ZERO is clearly designed with four-player co-op in mind. Unfortunately, multiplayer is local only, and those playing alone may find themselves at a disadvantage. In single player, the sheer volume of enemies onscreen is at times overwhelming. Even the simpler tasks, like carrying two keys through a dungeon or activating a series of pressure plates, can feel like chores without another set of hands around to help out.

Even with the two questionable mechanics, one can’t deny Super Cane Magic ZERO certainly has charm. Its art direction compliments the overall quirky nature, and the meta-style humour is, at the very least, wholly memorable. For those with a big couch and with three other friends to play with, it will no doubt provide plenty of silly fun. Until we get a sequel to Castle Crashers (if ever), this just might be the next best thing.


Get Sweet Deals on Indie Games on the Nintendo eShop Sale