The scene is London in 2070. Crime and poverty are rampant. Technology rules and the line between corporations and criminal syndicates has become as blurry as security cam footage from a liquor store robbery. Point and Click adventure Sunday Gold, from BKOM Studios and Team17, puts you smack dab in the middle of this rather grim little scenario, as you lead a trio of underworld ne’er-do-wells taking on the city’s brash criminal CEO, Kenny Hogan. They’ll need to use all their heisting, problem solving, and even fighting skills to get their latest job done and live to tell about it. Sunday Gold’s combination of excellent combat sequences and clever puzzle solving will leave you gobsmacked, even if its clichéd story falls a bit flat.

Get Ready for a Fight

The meat and potatoes of Sunday Gold is its Point and Click gameplay. You, as your three main characters Frank, Gavin and Sally, play through set-piece chapters with multiple environments to analyze and solve. Whether it be office buildings, dive-bar alleyways or car-parks, you’ve got to find the right things and put them together the right way in order to move on to the next chapter. You also have to use the right person for the right task. Your characters each have unique skills to get the job done. Gavin is a tech wiz, who hacks computers and passwords. Sally is the muscle, who can move dumpsters or pull open stubborn doors. And Frank picks locks, in addition to having some solid skills with a switchblade in a fight.

A fight, you say? Yes, combat is one of the many ways Sunday Gold mixes up the Point and Click formula. Everything you do in a level, whether it be opening doors or flipping a switch, uses up Action Points. Use them all up, and an Alert Meter triggers an encounter with enemies. That’s when Sunday Gold switches genres and basically becomes a JRPG. You battle, Final Fantasy-style, using skills, items, weapons and special attacks. It’s a great way Sunday Gold ups the stakes from the usual find-this, use-that Point and Click loop. While playing, I got nervous when the Alert meter ticked up, and but I was also kinda excited to have another battle and use my combat skills. 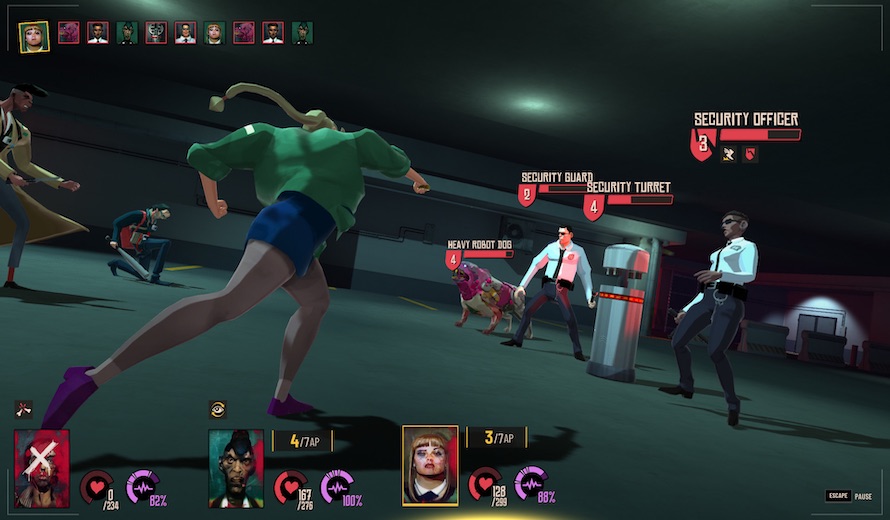 You’ll Need to Use Your Brain Too

Sunday Gold borrows leveling and skills trees from RPGs as well. XP is used to improve your skills and unlock special ones that can be really useful (maybe essential) in combat. My favorite one was probably Gavin’s dynamite ability. Tossing explosives at groups of enemies caused random damage and chaos that sometimes made them lose Composure. If their Composure meter dropped enough, they might Panic. Plus, it was just fun to see what random craziness I might cause with each toss. I found that to be a common theme throughout my play time: Sunday Gold is among the most fun Point and Click games I’ve ever played.

But that doesn’t mean it’s an easy game. Sure, sometimes I was able to charge in and just randomly slice and punch my way through low-level security guards. But other times, as with Chapter One’s Boss Battle, solid strategy and perfect execution were a must. It’ll sometimes take you a few tries to get through these bigger battles, and you’ll have to learn from each beat-down to know where to adjust next time. Finally getting it right and overcoming that first Boss was a rush of adrenaline. And it’s a great example of how Sunday Gold challenges you while always making you feel you can do it if you’re smart.

Besides combat, there are other ways Sunday Gold varies the gameplay effectively. Lockpicking, hacking, and tests of strength add nice mini-game fun to levels. Each challenge is well-designed and has you using your brain, coordination, or both. Hacking is tough, but you learn to predict passwords based on the clues. Lockpicking tests your ability to press the button at just the right time in a rotating lock. Sally’s strength games are maybe the toughest of the bunch. You’ve got to hold a very fiddly arrow marker in the right place, fighting its twitchiness. Sunday Gold seems made for people like me. I’ll be honest: I’m not a fan of pure Point and Click games. The trial and error, the one-note gameplay, just gets monotonous. But Sunday Gold is so much more. It’s many games in one, and they come together in a way that feels great to play. 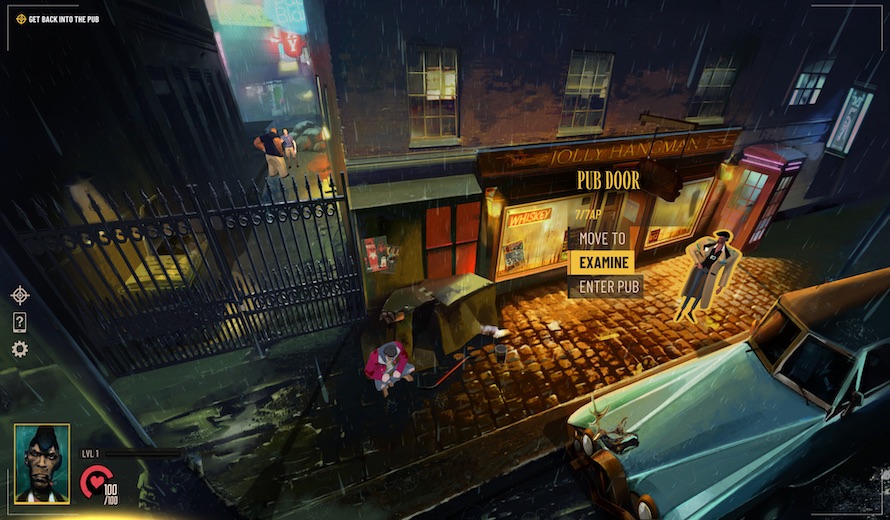 In the area of production values, Sunday Gold shines. The game is fully voice-acted and the characters come to life believably with solid acting and well-written dialogue. The visual style is like playing a cool comic book, and the smooth musical score accompanies the action nicely. Between the fun gameplay and slick aesthetics, I was (pleasantly) reminded of the great Disco Elysium. That’s high praise indeed. I also found the game’s mechanics to be smooth and reliable, and I never experienced a crash or other issue. For those playing on a Steam Deck, however, I have some bad news. It doesn’t yet work on Valve’s new handheld – yet. We’ll see about the future. But for now this looks to be a Windows-only experience.

If there is an area I was disappointed in, it was maybe the story. Don’t get me wrong, it was certainly serviceable and the interesting characters had me caring about them. But I found the set-up, the grim dystopian setting and the plot points to be a bit clichéd. We’ve seen this story in many, many heist movies, crime capers and such over the years. Add to that the totally-expected “unexpected twists” and Sunday Gold’s plot won’t leave you lying in bed shook, thinking about it after you’ve finished. But it is more than adequate to glue together the many fun game play sequences.

As I said before, Point and Clicks aren’t usually my thing. Putting things randomly together, making obscure leaps of logic, and cycling through inventories just gets boring for me. But Sunday Gold offers so much more than most Point and Click games. It’s got JRPG-like combat. There’s the fun mini-games. And it’s excellently voice-acted and it looks gorgeous. Sure, the story won’t blow you away but trust me, Sunday Gold is a big game in a little package and it’s definitely worth a look. 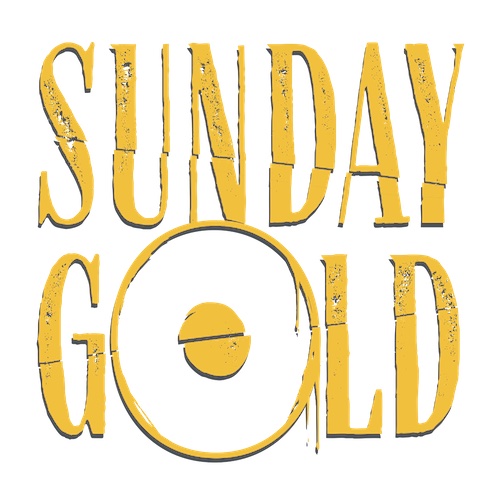