Play on Your Apple with the Steelseries Nimbus +

Imagine you’re at your inlaws’ place. The post dinner chit chat has finally tailed off, and you’re looking to unwind. Your Switch is dead, and the inlaws have nothing but an Apple TV. What’s a gamer to do? “Eureka!” you think: your trusty Steelseries Nimbus+ is in your backpack. Between that and an Apple device of some kind (iPhone, iPad, or Apple TV), you can get your dual joystick game on just about anywhere.

Apple Arcade really opened the door to Apple devices as serious gaming machines. Sure, freemium games like Clash Royale and Two Dots have been around for ages, and they’re great for a 10-minute bus ride. Arcade adds to that pool with cool experiences that cross over from other “real” gaming platforms like Sayonara Wild Hearts and Shantae, and unique titles such as Grindstone. “Real” games (alright, I’ll quit saying that) are often better with a controller – god forbid you attempt playing anything with the Apple TV remote.

So, enter the Steelseries Nimbus +. Adopting the general shape, layout, and ergonomics of the Xbox One controller, the Nimbus is familiar in the hand. The surface texture is like an incredibly fine sandpaper, which has held up pretty well through testing. Grip is good, though I’m not a fan of the general feel of the surface, especially not compared to a Dual Shock 4 or the Switch Pro controller. Seams between shell pieces are raised and rough, and made long term comfort an issue for me. The angular design of the shell is at least partly to blame. It looks futuristic and provides good surfaces to rest your fingers on at first, but the edges do become a bother after an hour or so.

The D pad is super clicky, and the face buttons are Xbox-esque, though I worry they could become mushy over time. The analog sticks, on the other hand, are very tight and precise. There’s zero looseness on center, even close to a month after starting to test it out. Impressive to be sure, especially on a $70 piece of hardware. They’re concave and more or less Xbox height, but the surface of the stick is bizarrely smooth. Borderline slippery. Apple Arcade doesn’t have many fast action games, but any experience requiring precision stick work is instantly made worse when you’re not confident in your thumbs’ footing.

The short travel triggers sit in an ergonomically pleasing position, and offer a smooth, linear travel. The bumpers don’t fare as well sadly, feeling more like remote control buttons than controller buttons, and requiring your whole hand to shift to confidently press them. 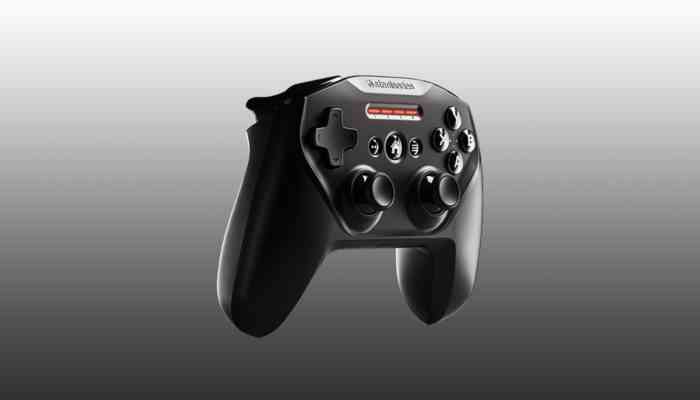 More Durable Than… Pretty Much Anything

Still, The Nimbus + feels like it could survive a play session with the Incredible Hulk. After he’s taken a total beatdown. You could probably drive a school bus over it. Seriously, there’s not a single squeak, creak, or rattle to be found in the Nimbus +. It’s clearly light and plasticy, but it might survive until the heat death of the universe. You know that scene in Napoleon Dynamite where Uncle Rico tells that guy to try and rip the Tupperware? It’s about that strong. For kids and angry gamers, the Nimbus + is bulletproof.

Connecting up to your Apple devices is dead easy, employing the same bluetooth connection interface as any headphones, cars, or smart speakers in your life. And that’s it. From the first connection, I’ve had zero connection issues or funny drops in signal. 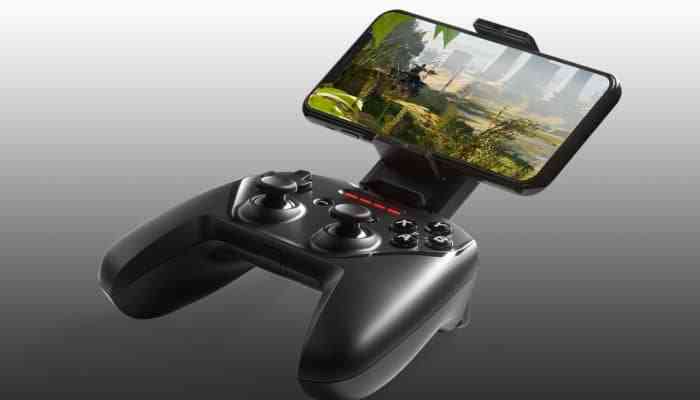 Battery life is, in a word, ridiculous. Steelseries claims 50 hours, and I have no doubt it’s at least that long. Seriously, I haven’t charged it in over a month, and it still claims to be ¾ full. Though I would have preferred to see a USB-C port instead of a Lightning connector, it’s really nice to not think about whether or not the Nimbus + will be ready to rumble.

The Nimbus + ships with a mount to stick your iPhone in, and it’s one of the strangest designs I’ve seen. Angled, retractable metal pins sort of squish into rubber mounts on the controller, and the result is anything but confidence inspiring. I mounted my iPhone carefully a couple of times, but only over a really soft surface. The phone clamp seems sturdy, but the controller side of things is beyond flimsy. I wouldn’t trust it, even when playing in a stationary location. On a train? Forget it.

Overall, the Nimbus + is a good solution for playing Apple based gaming platforms. Some of the ergonomics and material choices aren’t as refined as those found on traditional 1st party solutions, but it’s still pleasant enough in the hand for the kinds of pop in, pop out games you’ll find on Apple Arcade. A lame phone mount spoils the fun somewhat, but with near-infinite battery life and durability likely to outlive your great-grandchildren, the Nimbus + seems purpose built for abuse.