You can’t talk about SteamWorld Quest without first recognizing its genre-hopping developer, Image & Form. Not only have they kept the SteamWorld name and steampunk aesthetics intact since the original SteamWorld Dig (and to a lesser extent, SteamWorld: Tower Defense on DSiWare), they aren’t afraid to branch the franchise out into new and exciting genres. 2015’s SteamWorld Heist saw them flex their muscles at strategic turn-based shooting while SteamWorld Dig 2 is a near-perfect Metroidvania. So enter SteamWorld Quest: Hand of Gilgamech, the newest entry in the series that also, predictably, sees the developer once again trying something different — this time, a turn-based roleplaying card battler. So how does it fare, you ask? Unsurprisingly, it’s another home run for Image & Form.

As far as introductions go, SteamWorld Quest plays it rather safe in the story department but thanks to its charming cast of robot heroes, I stayed invested through the whole thing. There’s Armilly, a young and enthusiastic knight that wants nothing more than to join the Hero Guild. Copernico, the level-headed mage and the shy but brutish craftsman, Galleo. The three make up your initial army and are subsequently swept up in a quest to find out why their village was attacked by the evil Void army. It isn’t the most original premise out there, but the script is sharp and funny and I’d be lying if I said I wasn’t at least surprised by a few of the story turns either.

This is the first real RPG of sorts for the SteamWorld series, and fans should be happy to hear that Quest’s combat system is some of the most fun I’ve had in any RPG. Battles are turn-based but instead of simply selecting Attack or Guard from a menu, you’ll choose up to three ‘punch cards’ every round that is drawn randomly from a 24-card deck. Each party member can only choose their own cards from the ones that appear on the bottom of the screen. There are three different card types to choose from and each contributes to a Steam Pressure meter (SP) that will enable you to perform powerful offensive and defensive moves. Strike cards are your basic offensive attacks while Upgrade cards provide temporary buffs to your team. Collect enough SP and you can cash them in to unleash the special Skill cards. 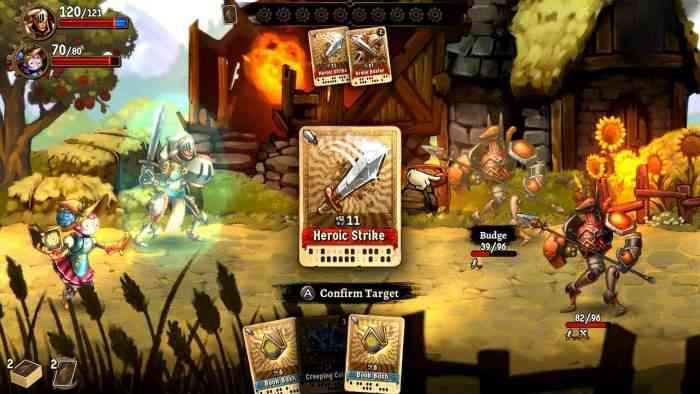 There’s more to it than simply filling a meter. Like any good RPG battle system, the more you play the more you grow to understand its complexities, and SteamWorld Quest is no exception. For example, playing three cards from the same character in a row will create a combo chain that automatically adds a fourth card to the mix. Depending on the character and their weapon, it might result in a devastating blow to your enemies or a protective shield around your party.

There are also specific cards that can be played right after one another that activate tag team moves. While the battle concepts don’t change much as you progress through the game, the balance of switching party members out plus the vast assortment of punch cards you collect open up a huge wealth of strategy I loved tinkering with. It’s constantly unpredictable and I found myself looking forward to enemy encounters, even ones with low-levelled enemies.

Outside of battle, things take a more side-scrolling approach. You’ll run around the lovingly hand-drawn world talking to NPC’s, bashing destructible items for loot, and opening chests. You can see your enemies on screen too, which means you can smack them with a pre-emptive attack to give yourself a bit of an advantage, ala Paper Mario. I also loved that a fast-forward button is basically programmed to the Switch’s ZR button at all times, a feature that can be used in or outside combat. Want to sprint to the next area? Just hold down ZR. Don’t want to sit around watching your enemies play out their attacks? Just use ZR. It may not sound like much, but I appreciated having the option to speed things up especially after seeing the same animations play out over and over again. 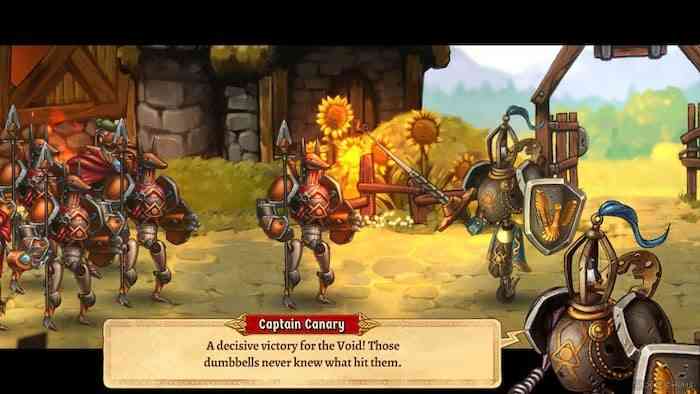 Scattered throughout the world are statues that not only act as save spots but can be used to refill your health when low. But FYI, doing so will cause all of the enemies to respawn around you. This might sound like a deterrent for replenishing health but I found it to be a nice way to level up — albeit a tad slower — without crossing over to the next level with more advanced enemies.

As far as length goes, I wrapped things up around hour 15, but your mileage may vary in this department depending on the difficulty mode you choose from the get-go. I stuck to the default, or Knight, setting which provided a satisfying challenge overall. Things got a little bit hairy around the halfway mark but grinding some of the older levels never felt tedious like other RPG’s do. 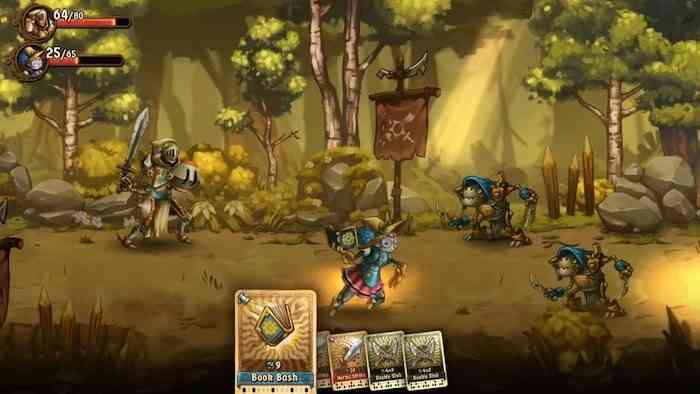 SteamWorld Quest is the rare RPG that encompasses everything one loves about the genre while keeping things bite-sized. It’s super easy to pick up and enjoy either in short or long bursts. And while it may sacrifice a traditional open world in favour for more linear-based levels, it doesn’t feel any less of an RPG. SteamWorld Quest is another example of a game that feels like it was tailored for the Switch. Touchscreen support is oddly missing here (swiping and tapping on cards seems like a no-brainer) but in no way is it a dealbreaker. Whether it was taking a few minutes to clear out some baddies or reshuffling and upgrading my card deck, time spent in SteamWorld Quest was always a blast.

Image & Form has done it again. They’ve created another gem in their SteamWorld series that not only shows their talent as game developers but also their love of RPG’s. The card battle system is incredibly addictive and offers a ton of gameplay options to boot. And while the story is somewhat by the numbers, the memorable characters, dialogue and rewarding gameplay elevate it above the pack. Even if you’re not big on card games, SteamWorld Quest: Hand of Gilgamech is another home run for Image & Form and a definite must-buy on Nintendo Switch. 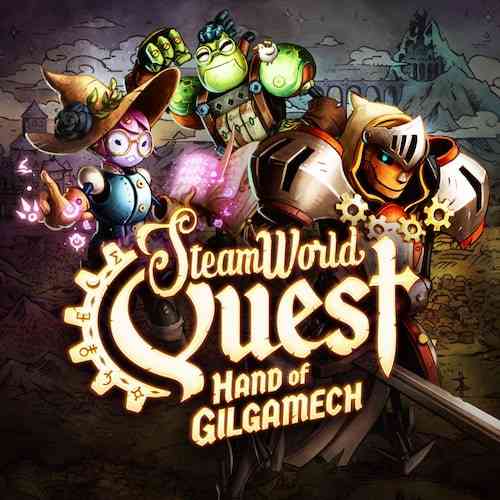