Stealth Inc. 2: A Game of Clones Review – This Game is Definitely Not a Clone

Metroidvania is a word I hate. Descriptive though it may be, it just doesn’t roll off the tongue. For the unfamiliar, Metroidvania describes a genre of games mimicking Castlevania and Metroid games of yore, where progression depends on acquisition of new abilities. Such games typically involve loads of backtracking, and sharp remembrance of where unreachable platforms are. Stealth Inc 2 is more straight forward in terms of traversal, but will certainly test the ol’ noodle while providing stylish entertainment in spades.

Stealth Inc 2 tells the story of a nameless, faceless clone. You are one of many, being bred by an evil empire for sinister purposes. This includes : 1) to subject you to horrific tests, and 2) to mercilessly slaughter you and include your signature goggles in a fast food kid’s meal. It’s a disturbing and stupendously evil plot, and one that only you can stop. Quality Assurance Director Malcolm Alderman, who will of course stop at nothing to prevent your escape, oversees the factory. 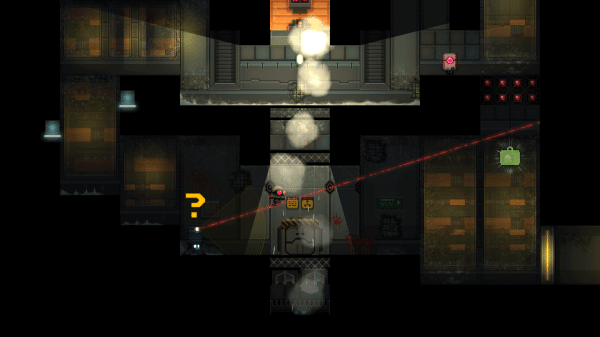 The game is structured in layers. There’s a sort of overworld where you’ll explore the facility, looking for a way out, and rescue other clones when you get a chance. The real meat of the game exists in the 60 ‘test chambers’, where puzzling, platforming, and quick reflexes are key. Each grouping of chambers revolves around a unique premise or gadget and provides a solid challenge without risking sanity or testing controller durability. The developers have also included a very robust level editor, allowing for easy creation and sharing of personal masterpieces.

Thankfully, minimal frustration comes from control issues. Inputs are represented onscreen in a very direct fashion, with minimal lag or floating. In fact, it feels a lot like an old 8 or 16-bit game, which makes precise platforming and difficult timing sequences more user friendly. Stealth Inc 2 is one of those games that just feels right. 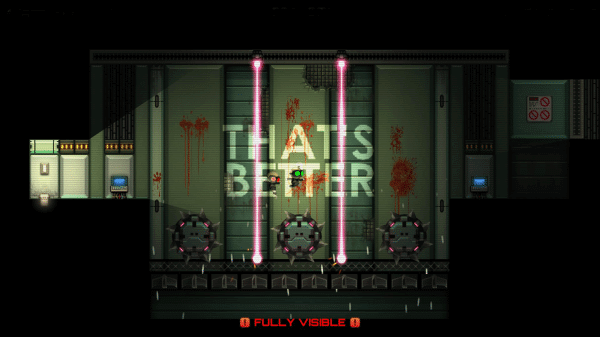 As the title implies, stealth is your ticket to survival. There’s plenty of rearranging blocks to cast shadows, and other environment manipulation techniques to avoid detection by the factory’s robot guards. It’s a mostly ternary (3 phase) system, with the colour of your goggles (and PS4 light bar!) indicating if you are hidden, partly visible, or completely visible, but is super satisfying in practice. Where being sneaky feels tentative or nervous in other games, here it feels commanding and powerful. It’s an unexpected feeling, but a refreshing one. That’s not to say that the AI is dumb per se, but there are certainly patterns to be exploited in most cases.

The other component of pattern exploitation comes from the gadgets – spoiler: they’re awesome. Each gadget has myriad uses, which generally stay away from genre mainstays like grappling hooks. My personal favourite is the Inflate-a-Mate (see header image), which has a gloriously goofy design and near endless uses. Kudos to the dev-team on for thinking, and going, outside the box with weird and hilariously 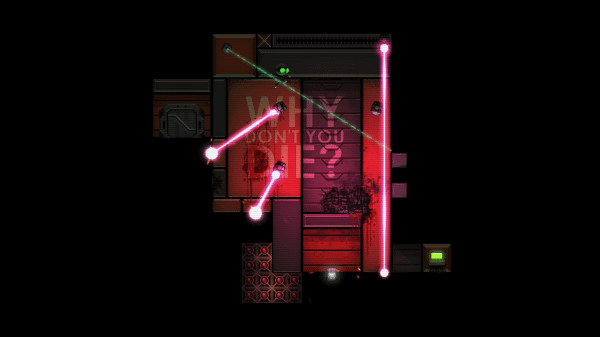 Speaking of design, Stealth Inc 2 is crazy stylish. The art is all top notch – characters and levels are creative and unique, and animations are simply great. Heck, the moveable blocks have faces that get excited when you get close to them. How amazing is that?! Levels also have a tendency to morph as you progress, with shrinking hallways and closing doors that subtly indicate where you should focus your attention. Mocking or intimidating messages also appear on walls as you move around, and are used to great effect. In one instance, I mistimed a jump and died in a test chamber, only to have “Idiot” appear on the wall. Brilliant.

Stealth Inc 2 might seem like a standard *shudder* Metroidvania experience on the surface, but it actually offers a unique and very entertaining experience. It looks great, it feels great, and it’s legitimately fun to play. For $14.99, you can’t go wrong here.

Next Slow Down, Bull Review – Light Hearted Fun for a Charitable Cause
Previous Titan Souls Review – One Arrow Vs Giant Titans, Good Luck With That!