Titan Souls Review – One Arrow Vs Giant Titans, Good Luck With That!

I like to consider myself an experienced gamer, having played all sorts of games at all types of difficulty. Once and a while, though, a game comes along that is so challenging it has me raging and spewing obscenities… yet I cannot put it down. This is one of those times. Let me introduce you to Titan Souls. My first experience with the game was at PAX East (Boston) in March, where I had some hands-on time with it in demo form. The demo was short, but gave me a tantalizing taste of the game, wanting more – but would the finished game satisfy, or just leave bad taste in my mouth?

Gameplay is deceptively simple: you control a small character whose only weapon is a single arrow. You can shoot this arrow in any direction, and later pull the arrow back towards your outstretched hand. It’s a rather interesting mechanic, and I quickly learned it is an essential one to defeating the bosses in the game. You also can sprint and roll for a short burst of speed – and you will be rolling a lot to try to avoid death. But you won’t avoid it completely. There was a lot of death dealt from the hands of the many bosses in the game. In fact, the game is made up entirely of boss battles.

The world is huge, and you will be exploring a lot to find all the bosses in the world. Areas you come across all hold a marker on the ground which serves as a check-point, so when you die (and you will die!) you start from there. Markers also show you how many bosses there are in the area and a rough idea of what direction to go in to find them. Once you beat a boss the marker lights up, and back near the game’s starting point, a very large door slowly become lit too.

What is behind the large door? Why are you killing these large creatures in a ‘Shadow of the Colossus’-type fashion? That is my only gripe with the game, is that there are many questions and very little exposition to explain what the purpose is. Sure, there are odd symbols, writing, some of the bosses names are in English, others written in a strange alien text – but why? One of the creatures talks to you as you near with faint hints of your past and goal, but they’re just that, hints. Maybe the developers felt content leaving that part up to the players’ imaginations, but I do feel like some extra story would help. 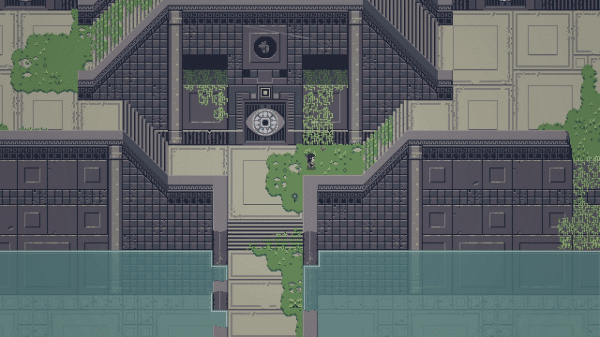 Another unique thing about Titan Souls is that you have essentially have but one hit point. If you get hit, you’re dead and respawn back at the last marker you visited. However all it takes to take down a boss is one well-placed, well-timed shot to take them down… but you will have to work hard to find your chance and execute it successfully. I have to say it felt damn good to take down a boss after racking up several deaths. (You have unlimited lives, but the game counts each death to humble you!)

The graphics in Titan Souls consists of old-school style 16-bit pixel art, although some enemies have some more advanced 3D animation effects applied to them. I was reminded of FEZ too because of the blocky shapes and markings throughout the lands. I really enjoyed how the game is presented on the whole, and loved exploring to see what is waiting to kill me around each corner. The land is peaceful, dormant, until you awake a boss to fight. The boss selection is really well done, with each having their unique ways to kill you quickly, and I’m not joking. 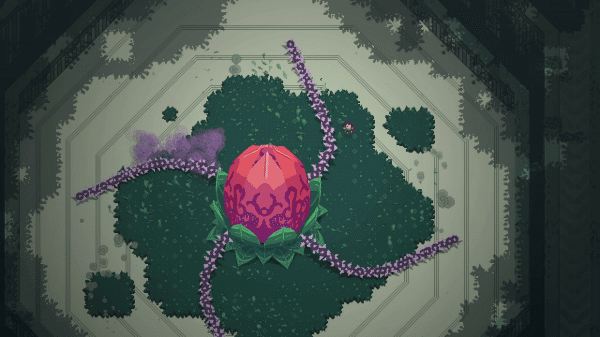 As you explore the lands of Titan Souls you will be treated to some really beautiful orchestrated music. The bosses all have unique and impressive battle music – if you live long enough to hear it! They seem to have a wide range of music for the bosses, ranging from orchestrated melodies to heavy metal guitar riffs. This is a must-own soundtrack in my opinion.

Titan Souls was a tough and a well-fought battle that I enjoyed from beginning to end. Even though it had me raging at times, the thrill of taking down the Titans one by one gave me an immense feeling of satisfaction. While it is a relatively short experience (I was able to finish the game in just over six hours), it was worth every minute.

Next Stealth Inc. 2: A Game of Clones Review – This Game is Definitely Not a Clone
Previous Goat Simulator Review – This is One Baaaaaad Game