Although a quarter century has passed since its theatrical release, 1997’s Starship Troopers still holds up. Sure, the special effects look pretty lame by contemporary standards, but the story and scenery-chewing acting remain engaging and fun. As a videogame property, though, Starship Troopers hasn’t been very successful. At least five games have come and gone. Does Starship Troopers: Terran Command finally give us a game worthy of the film’s inspiration?

For the young folks out there, the film Starship Troopers is based on a 1959 novel by sci-fi master Robert Heinlein. Protagonist Johnny Rico defies his parents and joins the Mobile Infantry to fight an alien swarm of Arachnids on the bug home planet of Klendathu. The film follows Johnny’s heroics as he rises in rank, and features a fair amount of gore and bug-killing in addition to a romantic subplot. While the film was originally dismissed as third-rate sci-fi, later critics came to appreciate the movie’s social and political commentary.

That’s all kind of irrelevant to Terran Command, however. Although it imitates the style of the film, Starship Troopers: Terran Command is a real-time strategy game. Sort of, anyway. Classic RTS games emphasize base building and a tech tree. Terran Command has some base-building mechanics, but it’s really about sending mobile squads of infantry around the map. Arachnids are everywhere. In nests, in tunnels and in the air. 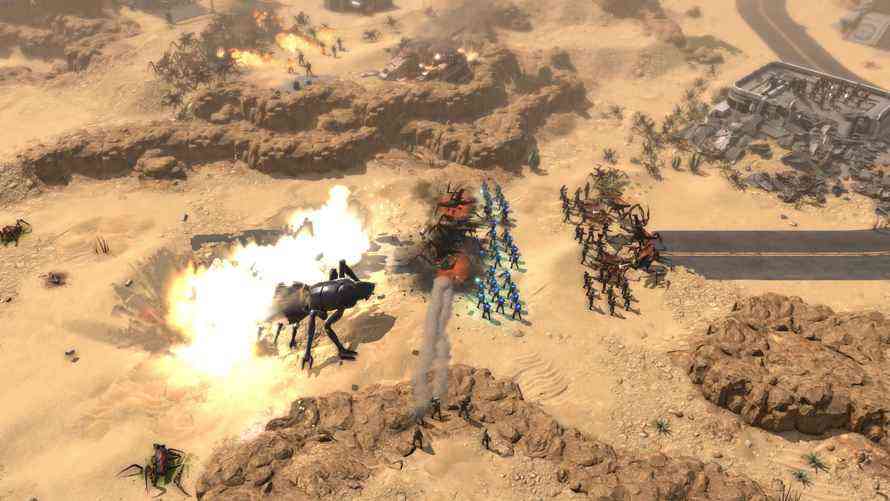 Starship Troopers: Terran Command begins with a tutorial battle pulled directly from the film. Your squad of riflemen faces overwhelming numbers of Arachnids and must retreat to home base to be airlifted to safety. This first scenario teaches the player some of the basics of movement and fundamental commands. Each subsequent mission introduces new tactics, new units and new enemies. While there’s no skirmish mode or map maker — important missing features — it is possible to replay scenarios once unlocked in the campaign.

Terran Command has a pretty consistent gameplay loop across its 20 or so scenarios. You begin with a modest force, capture abandoned installations, and construct a limited number of support structures. Each of these allows you to call in new units via dropship. You don’t heal individual soldiers, but when a squad’s health drops, you can ask for reinforcements. New units and reinforcements always arrive at an installation, so if the bulk of your force is far afield, it takes some time for the new squad to join the ranks. This means it’s imperative to claim and defend as many bases as possible. Long-lived units level up, which opens new abilities in battle.

Unlike most real time strategy games that let you figure things out, Terran Command insists on telling you what to do and where to go. Gameplay is continually interrupted by a commander insisting that you deploy snipers here or destroy a bug nest there. Many scenarios in, the commander is still shouting orders. Each mission has a steady stream of sub-objectives to complete. Sometimes the mechanics are clear, and other times, pretty opaque.

Squads are not terribly smart, and often units will do dumb things, like snipers not prioritizing important targets. There is no formation mechanic, so units always move in an awkward cluster. The bugs themselves are pretty varied and often pulled directly from the film. Fans of the movie will recognize not just the swarms of fast-moving insects, but the Arachnids that shoot plasma out of their asses, the acid-spitters and many more. 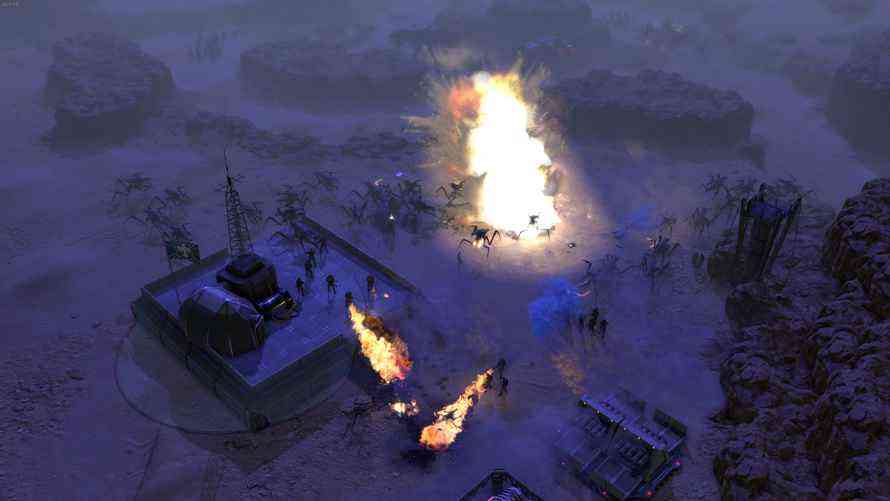 Most of Starship Troopers: Terran Command takes place on Kwalasha, a desert planet painted in drab browns and greys. There’s not a ton of environmental variety but there are some modest hills that offer a height advantage for snipers and other units. Bug hives are connected by underground tunnels and dens from which steady streams of Arachnids emerge. Aside from that, there isn’t really much sense that Kwalasha is anything more than a videogame construct, with choke points and ambush opportunities. Some of the missions take place at night or in generic-looking military bases.

The Mobile Infantry has a diverse enough number of units, but the different soldier types are hard to distinguish at distance and not terribly interesting up close. Like the infantry, the Arachnids are cool looking zoomed out, but up close reveal a lack of detail. They also move with a slightly jerky animation and at basically one speed. Any game that’s about killing bugs sets itself up for mockery if it has any technical glitches. Starship Troopers: Terran Command has a few graphical issues but nothing show-stopping.

While the game’s narrator and several voiced commanders sound similar to the film, your units’ shrieks and snippets of dialogue grow quickly repetitive. Environmental audio, weapon sounds and bugs are unremarkable. The game’s music, on the other hand, is epic and effective. When it comes to graphical, audio and accessibility options, Starship Troopers: Terran Command is pretty bare bones. Aside from resolution and a basic quality setting, there is no way to fine tune performance. There is, however, a difficulty option for each scenario. 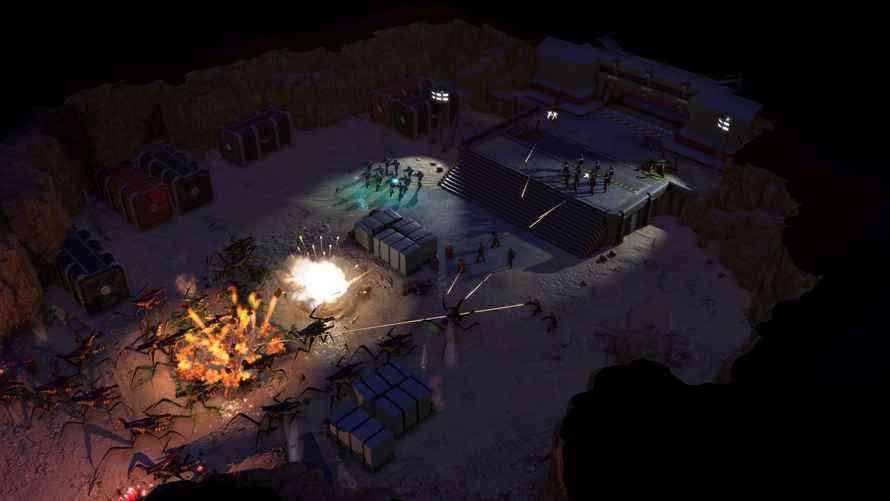 Starship Troopers: Terran Command does a pretty good job of paying homage to the films, at least in terms of design and presentation. As a real time strategy game, it feels defined by limitations and absent features like multiplayer, map editor, skirmishes and the ability to turn off the omnipresent commander. Gameplay can be challenging and fun, but here, too, dumb unit AI and lack of variety inhibit next-level enjoyment. Both fans of the film and squad-based RTS games will find something to appreciate, provided they don’t come to the experience with super-high expectations.

Crossfire: Legion Review – Back to the Old School