Sypro was one of the of my favorite characters growing up and the series took me on a journey that cultivated my love for gaming. As such you can imagine when Spyro Reignited Trilogy was announced, every fiber of my being longed to play through my humble beginnings, though this time on a grander scale on the latest console generation. With a complete overhaul of the game, is it still as good as it was 20 years ago? Without giving too much away right from the start you can exhale a sigh of relief for the classic Sypro is even more fun than ever before.

Sypro Reignited Trilogy sees the complete revival of the three games that kickstarted the adventures of everyone’s favorite purple dragon. For all of you who are uninitiated Spyro is a relatively linear, story-driven platformer that sees a young purple dragon, with the fate of the world on his shoulders, and his trusty sidekick Sparx, kicking ass and taking names. Along the way and regardless of the overarching narrative, they must jump, fly, ram, and dodge their way past countless of enemies whilst collecting gems, orbs, dragon eggs, and talismans. Oh, and let’s not forget the numerous bosses you’ll have to take down on your long road to victory.

From the start you can play any one of the three games available within the trilogy, Spyro the Dragon, Spyro 2: Ripto’s Rage, and Spyro: Year of the Dragon, all from the main menu. Each different in premise, yet familiar in style and gameplay, you’ll find yourself in some far-off worlds battling against the evil villians who hope to see the downfall of the dragon species. In Spyro the Dragon you’ll travel through a variety of worlds to free the dragons held under Gnasty Gnorc’s spell, in Ripto’s Rage you’ll have to free the worlds of Avalar from Ripto and his minions, and finally in Year of the Dragon you’ll face off against an evil sorceress and an army of Rhynocs who have stolen all the dragon eggs. 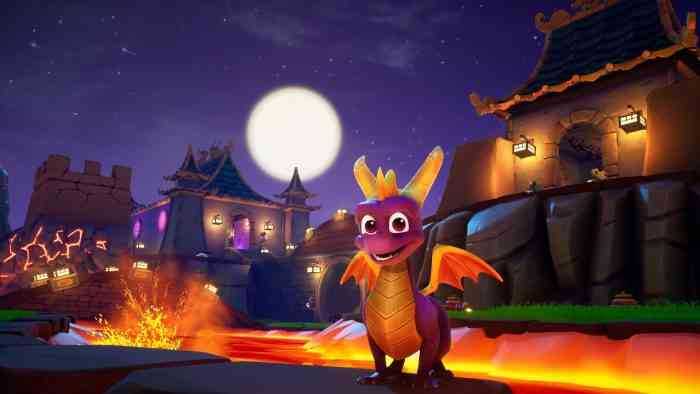 If you start from the beginning of the first and play as they were originally released you can really see the progression of Sypro as the challenges and puzzles along the way require more patience and a little more work in the second and third titles than they did in the first. Additionally, in both the second and third titles you’ll deal with a greedy fella by the name of Moneybags, and believe me, he’s exactly as annoying as he sounds. There’s even a couple parallels to real life, like paying money to cross a bridge. At the very least, however, you get to learn how to climb and swim in Ripto’s Rage, so long as you have enough money to do so. Just when you start to think that the gameplay is becoming too much of the same time and again Spyro: Year of the Dragon introduces four playable characters including Sheila the kangaroo and Sgt. Byrd the penguin, adding a whole new layer to the game. Instead of breathing fire and ramming your enemies into oblivion, you’ll have to make use of each of these characters unique talents, such as Sheila’s kangaroo kick. Sure, you might be able to get through the game without their help, though you won’t be able to achieve a perfect level rating without it and the third title definitely isn’t as fun without them.

Toys for Bob and Activision have done an amazing job revamping all three games included in Spyro Reignited Trilogy, so well in fact that I’d be more inclined to call this a remake instead of a simple remaster. The controls are smooth, the visuals are crisp, and even the soundtrack will have you bee-bopping along. It’s clear from the get-go that everything in the game is set to draw you in bit by bit. It’s not hard to tell that Toys for Bob worked on the game from the ground up, showing not only the graphics a little TLC, but also the upbeat soundtrack and voice acting as well. Spyro is more sassy than ever before and all of the characters sound exactly as they should, without any awful or cringeworthy moments to be found. With that said, the only thing that does get just a little irritating the more you play, is the repetition from the NPCs about the controls. Though a short walkthrough might be helpful in each game, by the time you’ve completed one world, you’re sure to have a good handle on the controls, without any gentle reminders.

Now while the gameplay is nothing short of fun, the controls are easy peasy lemon squeezy, and the visuals have been buffed to the max, the camera movement throughout the entire Reignited Trilogy simply fails to meet the same standard set by the rest of the game. At times the camera angle is frustrating, leading to enemies getting a hit on you or even worse, diving head first down a cliff to your death. Usually, the time when this comes into play is when you’re trying to swim underwater or you’re charging at an enemy, miss, and then have to turn around. At this point, you might as well just take a second to recenter the camera because otherwise you’ll be running in circles around them. Though I would suggest changing the view from passive mode to active mode in your game settings, this only makes this issue a little bit less annoying.

Spyro Reignited Trilogy will see you battling evil every step of the way, from little enemies to huge bosses, through snow, water, lava, and spacious greenery, and through it all, it keeps its charm. It’s chock full of short side missions and puzzles, as well as witty banter that will keep you intrigued the entire time. Whether it’s gathering gems, collecting orbs, or freeing dragons, you’ll have more than your fair share of fun playing Sypro Reignited Trilogy.

If you were expecting a bunch of new content included in the revamp, you might be slightly disappointed, yet if this is all brand new and shiny to you, it’s more than worth it’s $40 USD price tag. Featuring 100 levels and 400 characters, this is a hefty game all on it’s own without any additional game components added into the mix. Though I would have loved the addition of a little arena to battle against friends Sypro v. Sypro style to see who could gather the most gems, orbs etc. in a limited amount of time in a special world like Ocean Speedway, I’m definitely not disappointed that Toys for Bob stayed true to what made Spyro so much fun in the first place. After all this entire game is a nostalgia trip if I’ve ever been on one. At the end of the day even if you were someone who played it twenty years ago, there’s still something completely satisfying about playing this revamped ode to the classic Spyro all this time later and that’s definitely something worth celebrating. 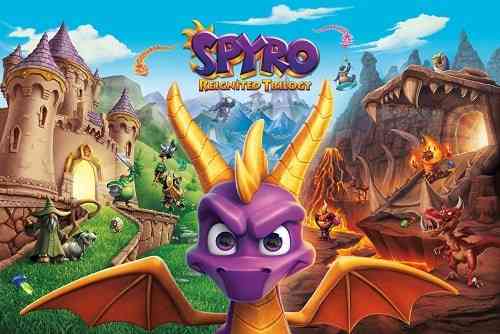