Who the heck is Sly Cooper? These were the words uttered to me by my 15-year-old son when I told him I was reviewing the latest in the Sly Cooper franchise.  Not too hard to believe considering it’s been a long 8 years since we’ve seen anything new from the thieving raccoon.  Aside from a polished up HD version of the classics the hiatus has been a long one.  In fact Sly almost managed to skip an entire console generation just sneaking in at the end of the PS3’s life cycle.  With the torch being passed from Sucker Punch to Sanzaru Games was it worth the wait? Indeed it was.

Considering there has been such a large gap in between Sly Cooper games one would have to assume that a lot of gamers looking to pick the title up would be new to the franchise. Essentially this is Sly Cooper 4, but as a jumping off point the game does a good job of giving you all the background information you need without taking too long to introduce you to the storyline as it leads up to now.   Once you get to jump into the gameplay you’ll find that Sanzaru has done a great job of being faithful to its predecessors while giving you something fun and fresh. 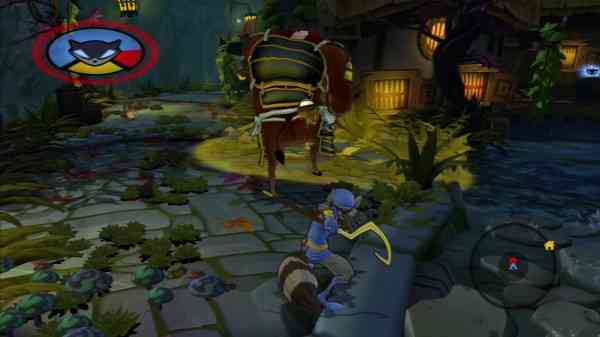 I never like to spoil too much of the story but the basics are that Sly has retired his thieving ways and is faking amnesia while maintaining a relationship with his former nemesis Carmelita Fox.  Bentley, his genius-level turtle pal, has developed a time machine.  One day, while perusing the Cooper family history in the “Thievus Raccoonus”, he finds that the pages are disappearing as if time is basically changing and being rewritten right before his eyes.  Bentley obviously deduces that something is happening in the past and that it needs to be fixed.  Enter Murray the hippo and Sly, and the three unlikely companions set off on a journey through the ages to put things right.

Getting down to it this is a platforming game at its finest with some twists and turns thrown in, under the guise of various mini-games and loads of collectibles, to keep things fun.  Sly will navigate rooftops, tight ropes, ledges and dark corners all while evading the gaze of guards and search cameras.  Control wise I found the characters to be responsive with only the odd missed jump or glitch.  In all honesty some of the platforming seems almost too easy as a single button push will almost always lock you on to the nearest sparkly blue balance point for Sly.  I really can’t complain though as most controller throwing temper tantrums of my youth were due to choppy controls and missed jumps and for the most part you’ll find none of that here.  Missions involving Bentley or Murray were always welcome as sneaking gave way to hacking or pummeling respectively.  My only complaint is that I really would have liked to use them more as they were a refreshing change of pace.

The time travel twist allows us to meet some of the Cooper clan ancestors, which for me was a definite highlight of the game.  They are often quite entertaining and the ability to use them in gameplay was a nice addition.  All said and done you travel through five distinct eras ranging from feudal Japan to the prehistoric ages, each with its own Cooper ancestor, each with its own sandbox style playground to wander in.  Missions where you get to play as one of the Cooper magnates were great fun as each of Sly’s forbearers has their own unique ability that freshens up gameplay.  Between all the characters you meet and the original three you start with, the gameplay variety is at an all-time high for the Cooper franchise.  If you add in the plethora of collectibles in the form of bottles, safes, Sly masks, and treasures you’ll find that the replayability of this title is quite high. 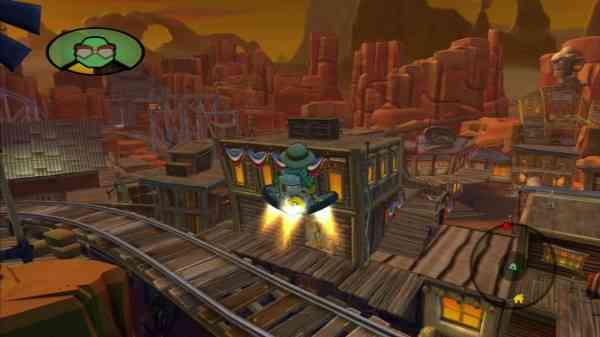 The Sly campaign is a strictly single player experience and in my eyes that’s just fine.  I am definitely of the mindset that not every game needs a multiplayer component especially if it doesn’t really serve the game well.  Thieves in Time works well at what it does and is no worse for wear with the multiplayer option missing from the formula.

One of the real pros to the game of course is the cross play ability for owners of the PS Vita. In fact, the PS3 game comes with access to the Vita version via a downloadable code, so in a way it is like getting two copies of the game for the price of one.  Throwing your saves to the cloud and playing on the go is fast becoming a real perk for owners of the Vita.  Another really fun perk of having a Vita is the ability to use it as a second screen of sorts while playing on the PS3.  It functions in game as a viewfinder for Thieves in Time and you can use it to track down bottles, treasures and Sly masks which gives you a decided advantage over the single platform users. Unfair?  Perhaps.  Awesome?  You betcha!

Staying true to its roots the cel-shaded style is a real treat in the visuals department.  Environments are lush and colourful while character animations are just as enjoyable.  Search as I might I couldn’t find many issues of clipping or framerate drops.  I found the camera to be top notch and rarely found myself in a situation where I couldn’t get the viewpoint I needed.  The cut scenes were even better and for me were really reminiscent of days gone by sitting in front of the TV on a Saturday morning with a bowl full of Alpha-Bits waiting for He-Man to start…in a word, radical. 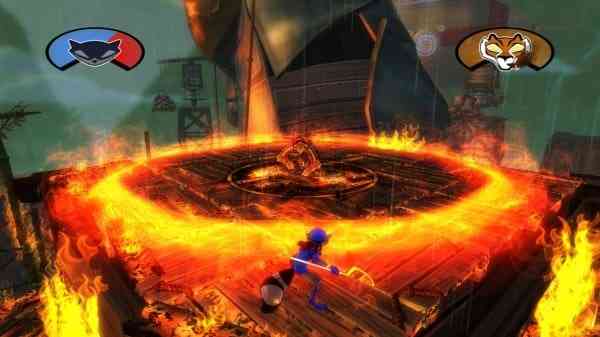 One item of note is the 3D option of the game for those with a 3D capable TV.  I checked it out and while certainly providing depth to the game and the odd 3D pop it was largely forgettable.  After navigating through an area with it enabled I quickly turned it off as I’d already noticed my eyes feeling fatigued.  Going an entire play session with the 3D on would undoubtedly give you a headache due to eye strain.

When treated to voiceover work via cut scenes or mission explanations I found it to be extremely well done.  The voice acting is fantastic and just cheesy enough to serve up that Saturday morning cartoon feel I mentioned previously.  The back and forth banter between characters was quite often funny and as a whole really delightful.  I enjoyed it being a ripe old 35 and my 5 year old would likely enjoy it as well.

I really can’t find a lot of fault in the newest iteration of Sly Cooper.  I found it to be truly enjoyable and rather charming.  It doesn’t take itself too seriously and it doesn’t stretch itself out to try and be anything more than what it is, a fantastic platformer.  The real kicker here, in my mind, is the low price tag.  Hitting your wallet at a mere $40, please excuse the obvious pun here, you are quite literally getting a steal of a deal.  If this is what Sanzaru Games can offer up on its first true attempt at the world of Sly Cooper I certainly look forward to them attempting it again.