Making the jump from PC to the Xbox Live Arcade comes Serious Sam Double D with a few extra letters tacked on to the end in the form of ‘XXL’. What exactly does the XXL bring? Well in the simplest of terms – more guns. While more guns and a local co-op that is an appreciated addition, it isn’t quite enough to save this game from getting lost in the XBLA back log and largely ignored.  I understand what the developers at Mommy’s Best Games were going for but despite what I’m sure was their greatest effort the game falls flat and is an average offering at best. To be fair there is potential in the gameplay to make it something worth playing but when you add up all the elements as a whole the game ultimately disappoints.

The backbone of what Serious Sam DD XXL offers is its gun stacker system. As you’re making your way through the game you pick up loads of guns and gun connectors. Connect one gun to another up to a maximum of 6-guns and you have yourself a fear inducing killing machine. The stacker system is certainly more than just an ‘add another gun’ formula. As you progress through levels you come across a vendor who will sell you upgrades for your weapons. The upgrades are admittedly a lot of fun and there is some strategy involved in stacking the right guns with each other. Varied configurations give you an advantage in different situations whether it is up close and personal or while frantically jumping around and shooting from a distance. 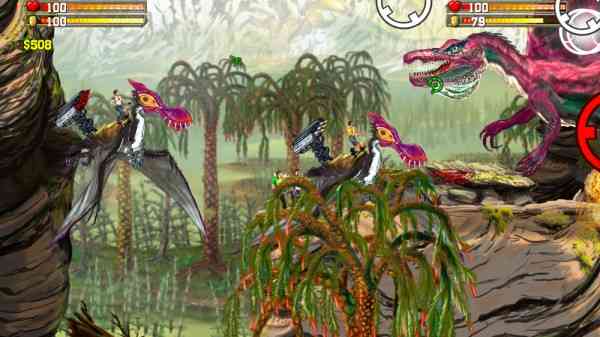 It is really fun at first with bullets and flames flying across your screen; however, I found that the novelty wears thin extremely quickly. The upgrades I mentioned are at the very least an entertaining addition to the game. While a few of them are practical allowing you to float in the air or slow down an enemy but others border on the verge of completely ridiculous. For instance, you can shoot grenades that turn into beetles and eat whatever gets in their way or you can shoot a mass of bees from a shotgun for example.

Adding to the ridiculousness of the weapons are the enemies and in true Serious Sam fashion you’ll be pitted against floating robot monkeys hurling exploding bananas, headless and screaming bodies running at you with bombs in their hands and exploding pancake monsters to name a few. Throw in some dinosaurs and you’ve got yourself a full roster of nonsensical foes to mow down.

There is a lot to explore in every area with multiple secrets to find and interesting ways to find them. You can pile up dead bodies and use them to jump off platform to get to a hidden space or you can use the jump pad, a jump booster you’ll acquire, to rebound off walls and reach otherwise unreachable platforms. These situations require a little bit of thought but nothing that will induce brain cramps.

While there is a loose storyline associated with the game it really doesn’t resonate at all. You’re travelling through time to stop your arch nemesis Mental… that’s about it. The developers keep it pretty simple. In all fairness I’m not sure if anything more is really needed as the whole point of the game is to make a chaotic mess and pile up bodies so perhaps the thin storyline is appropriate. 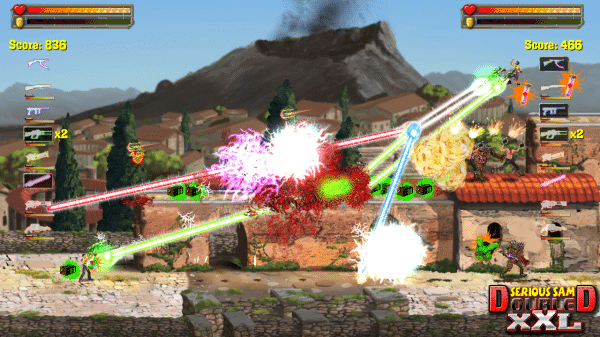 Where Serious Sam DD XXL really fails for me is in the voice acting and awful attempts at potty humour. It boils down to grade school level fart jokes delivered in horribly cheesy fashion that do nothing to add to the game. It’s not like I don’t get it as all it takes is a look at the name of the title to surmise that nothing is taken seriously in this title but the low brow cracks are just tired and unfunny. As much as I tried to like the humour I felt that even my teenage son would find it lacking. As uninspired as the voice acting, the accompanying rock and roll soundtrack doesn’t really stand out and just kind of blends into the background beneath the sounds of screaming and explosions.

Serious Sam isn’t anything amazing to look at but the characters are kind of amusing on screen and the back drops are nicely detailed. We’re not talking eye popping graphics but it’s clear that Mommy’s Best Games was going for a Metal Slug or a visually upgraded Bionic Commando type vibe and they succeed in that department. Whether you’re visiting ancient Egypt or Prehistoric Nova Scotia you’ll find overall that the game is easy on the eyes.

One of the real perks to the XXL version of the game is definitely the local co-op allowing you to have a friend join the fray in the form of Dan ‘Huff’ Huffington. Playing with a friend is always better and if you get tired of co-operating you do unlock Head-to-Head Arenas that you can square off in. Speaking of unlockables you can find hidden Mommy’s Best Games pies through your travels in game to open up access to crazy hard challenge levels. I’m not sure if they were crazy hard or I just sucked that bad but I shamefully admit that more often than not I had to give up on my attempts.

Summing it all up, this is definitely the epitome of “shut your brain off and shoot” gaming. In fact you might as well take your brain right out of your head and throw it down a set of stairs because nothing here will test your intelligence. If that sounds like it’s up your alley you might have a bit of fun with Serious Sam’s latest adventure but if you like your gaming experiences a little bit more cerebral you will want to steer clear of this one. Interesting elements aside they aren’t enough to pull this title out of the mud of weak humour and gameplay that doesn’t advance apart from giving you different ways to shoot things.