It’s tough to find great, competitive party games that satisfy both gamers and their less experienced friends, but indie developer Bread Machine Games accomplishes this wonderfully with its newest release: Slam Land. Slam Land is a multiplayer game that combines the brawling nature of Super Smash Bros. with the functionality of a chaotic basketball game. With your choice of kooky character, you set forth to battle it out in different arenas with up to four other players.

The artwork of the game is unique in its playful, tiki-meets-psychedelic style of animation, and the arenas are vibrant and colorful. There are five modes available — Slam Tour, Quick Slam, Peanut, Horse and Trash —- and the objective always revolves around dunking either objects or opponents into large “baskets” that move around the map. The baskets change form to match the background of each map — for example, a wooded map will have big tree stumps as its baskets, while another cave-like arena may ask the player to dunk into the mouths of long, blue caterpillar creatures.

Grab or Be Grabbed

The different modes offer a pleasant way to mix things up when you tire of the same objective, and they are all similar in terms of difficulty. Horse mode plays off of the popular basketball game of the same name, where players grab labeled horse figurines and dunk them to spell out the word H-O-R-S-E as fast as they can. In Peanut mode, a peanut spawns on the map and raises in value the longer it is held — making it somewhat of a reverse Hot Potato situation where timing (and frankly, jumping away from people) is key in dunking the highest value peanut you can. Trash mode floods the arena with bags of garbage that players can grab and stack to either shoot or dunk into the basket. Slam Tour is a continuous medley of all the different maps and game modes, and Quick Slam is the basic, no-nonsense place where you simply snatch your opponents and slam them into oblivion. 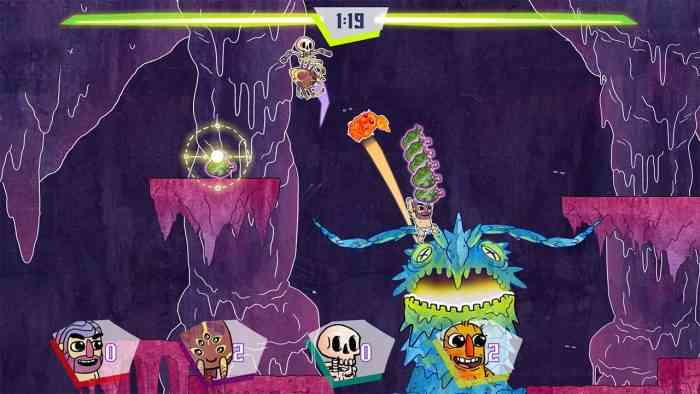 Though the gameplay is definitely a healthy challenge, its few controls make it accessible for players who may not be familiar with video games. Each character has the same stats and abilities, and there are no complicated combos to be memorized. In terms of controls, you can only dodge, jump, grab or punch, and you have the chance to jump out of someone’s arms should you be snagged. Grabbing does not have a very long range, and it’s part of the fast-paced challenge to time and position your grabs perfectly. In Horse, Trash and Peanut mode, it is not permitted to dunk other players unless they are holding key objects, and you will both simply bounce out of the basket if you attempt to. However, in Slam Tour and Quick Slam, all bets are off and it’s either grab or be grabbed.

I have very few complaints about Slam Land, as it runs smoothly and delivers unlimited hours of fun for its extremely affordable $7.99 price tag. It’s an excellent little game for what it is, however it does not offer a story mode or much incentive for solo players.  The selection of maps and characters also leave much to be desired regarding choices and variety, but hopefully, more options will become available down the line. It also would be nice to have a few more abilities mapped to the controls, but the simplicity as it is is what makes it easy enough for everybody to enjoy.

Overall, Slam Land is the perfect game for families and friends who want a lighthearted yet very competitive experience. It does not currently support online play, so make some room on your couch for a slamming good time.