Signs of the Sojourner Review – A Unique Deckbuilder Worth Diving Into

Signs of the Sojourner Review

I absolutely love card games and have been playing them my entire life. I’ve been a certified Magic: The Gathering judge, have worked a job selling and trading cards in a hobby shop, and even had a decent stint as a Hearthstone commentator. Having an in-depth experience with many card games, it isn’t often that I play something like Signs of the Sojourner — a game that feels like nothing else I’ve played before.

We’ve seen cards represent monsters, spells, resources, et cetera, et cetera. But how about dialogue? In Signs of the Sojourner, different cards represent different types of discourses, whether that is logical, direct, empathetic, passionate, mourning, or other emotions expressed through a conversation. And just like a normal conversation, sometimes we focus on talking about the same thing for a while, sometimes the discussion flows from one thing to another. And for a good conversation to happen, matching the pace and emotional connection with our partner is essential, and as a salesman, your way of life.

That’s right! In Signs of the Sojourner, you play as a journeying trader going from location to location, seeking out valuable goods to bring back home to sell. Making connections is imperative to keeping your business alive, as well as making further connections in different cities. As you play through your game, your character will interact with a wide cast of characters that will not only shape your story but also change the way you talk. 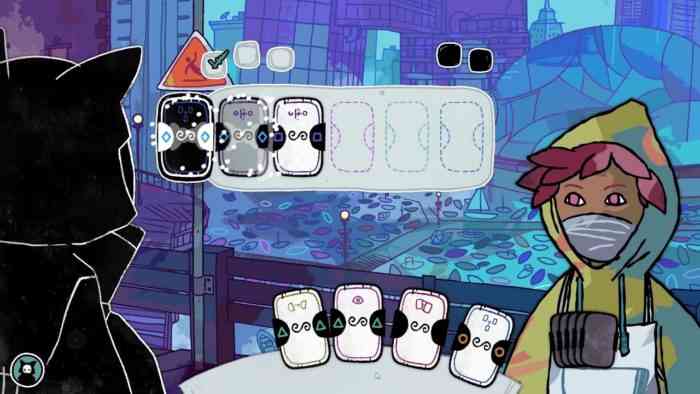 For instance, if you deal with lots of logical people, you will get better at talking logically as your other emotional cards get replaced by logical cards. In this way, you become better at dealing with a certain group of people, while you become worse at others. Of course, you can diversify and try to become a jack-of-all-dialogue, but miss out on developing specialized relationships with a small group of people.

About a quarter way into my first playthrough, there was a moment when the mechanic really clicked. In the story, I had gone on a few journeys and I was returning home from my longest trip yet. As always, my best friend was waiting for me to excitedly ask about how it went, however, this time everything was different. Before I became a sojourner, our conversations were easy, we talked like each other, but the more I was away, the more I had changed. I could no longer have our empathetic back-and-forths, as I’d become a straight-forward salesman. Our dialogues were now short and unnatural. As I grew and gained something, I had also lost something dear to me. This marriage of game mechanics to its story is probably the greatest achievement of Signs of the Sojourner.

Unfortunately, there are a few issues in my eyes that undermines this game’s amazing ludonarrative achievement. The biggest one being the lukewarm storyline, which neither opens nor closes with a bang. 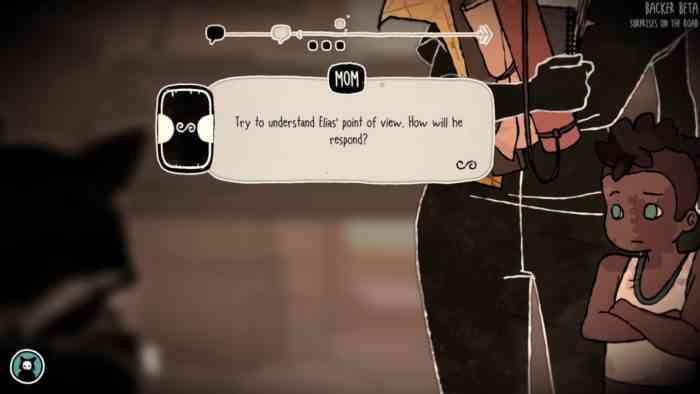 Much of the plot problems come from the lack of a strong protagonist. While the narrative wants us to care about our protagonist’s backstory — as the impetus of the journey comes through their parent’s passing — we are given next to nothing to latch on to. Your relationship to your mother wasn’t anything special, she was distant, but not in a conflict-driven nor solution-seeking way. We are not going on a journey to find out what happened to her, as her death wasn’t really mysterious, it’s more of a passing of the torch, except the occupation of a roaming trader just isn’t exciting enough of a hook on its own. Additionally, although there are some exciting moments that happen along the way, they are passed too quickly to really capture a significant climax. Gameplay-wise, since you can access your final encounter only by building your deck to fit that specific dialogue pattern, it’s also amongst your easiest tests. In such a way, the middle of your journey is the part where the game really jives with all its elements working together.

Additionally, having a silent protagonist felt like such a missed opportunity in this game. Being a story about a specific character and about their dialogues, having the lead actor never say a word feels like a strange choice, to say the least. My dream would be for the protagonist’s dialogue to change specifically depending on the combo of cards you played that turn, but I realize that would be a mountain of dialogue to write and code. But at the very least, I would have loved just pass/fail dialogue to fill the void. Currently, I find the protagonist impossible to connect to, and I find it also hard to fit myself into their shoes because the story feels too specific. 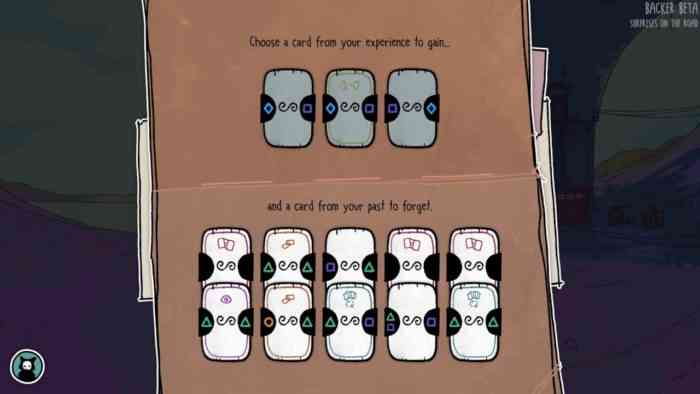 Still, with these gripes, Signs of the Sojourner by Echo Night Games has my definite seal of approval to those looking for a fresh deckbuilding game. At the end of my first playthrough, it felt like I only scratched at the surface of the game. With multiple endings and a variety of decks to try out, this is a title I’m looking forward to diving into once again.