Last March Yacht Club Games launched a Kickstarter campaign to fund the development of their game Shovel Knight. An action adventure platformer that, as indicated on their fundraising page, was to be a “ground breaking love letter to 8-bit”. Their hopes were high, as they wanted to raise $75,000 by the end of the campaign. In less than a month they far exceeded that goal, raising an astonishing $311,502, promising players “a sweeping classic adventure game, with awesome gameplay, memorable characters, and retro 8-bit aesthetic”. It’s quite evident within minutes of playing Shovel Knight that Yacht Club Games has kept their promise, developing one of the best platformers I’ve played in years. It’s a nostalgic adventure game that pays tribute to many of my favourite NES games.

The story begins with our hero, Shovel Knight, and his companion, Shield Knight. The game is a tale of their journeys and their search for hidden treasures. In the midst of their exploration they encounter a mysterious relic that leads to the disappearance of Shield Knight. It’s discovered that an enchantress has spread evil across the land and Shovel Knight embarks on an epic quest seeking to stop the enchantress and her 8 knights of the Order of No Quarter, while also hoping to rescue his dear friend before it’s too late. 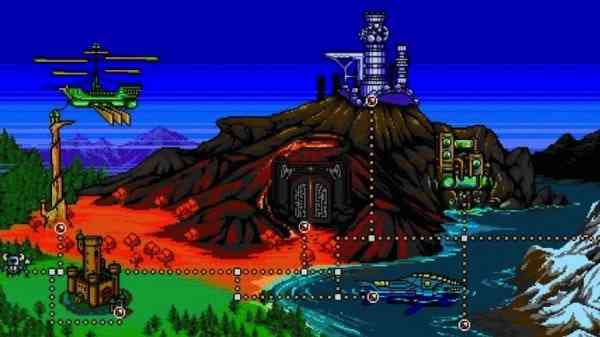 Shovel Knight’s adventures take you through castles and villages, clocktowers and forests, all laid out on a map that very closely resembles Mario 3, complete with mini bosses roaming between levels. Your primary weapon of course is a shovel, and enemies can be hacked and slashed, or much to my delight, bounced upon like Scrooge McDuck and his pogo stick in DuckTales. In addition to the shovel, there are also a number of ancient relics to discover, giving Shovel Knight special abilities to help him defeat the Enchantress’s evil minions.

The level design is fantastic, and while it borrows ideas from games like Castlevania, Shovel Knight stands out on it’s own, feeling unique and fresh. Things like lightning flashing while trying to jump onto a moving platform felt familiar, but I never had that feeling that I’ve been there, done that before. Each level is chock full of hidden secrets to uncover, walls to dig into, floors to drop down through, all revealing secret rooms filled with treasure and loot. There are also hidden music sheets to be found throughout the game which can be exchanged for large sums of gold when presented to the village bard.

While well designed, Shovel Knight can be brutally unforgiving at times. I found myself on numerous occasions in fits of rage, cursing myself as I failed to reach a platform for the 30th time in a row, or dying when a boss has 1/2 life left, after trying for hours to defeat him. Thankfully there are checkpoints in each level, and lives are endless provided you have enough gold to respawn. But for those looking for that true old school experience, or who are a glutton for punishment, the checkpoints can be destroyed and you can attempt to run through the level without dying.  The boss fights are truly epic too, heart attack inducing battles against the 8 knights of The Order of No Quarter. From the airborne propeller Knight to the Spectre Knight swinging his deadly scythe, each battle is a truly memorable experience that you won’t soon forget. 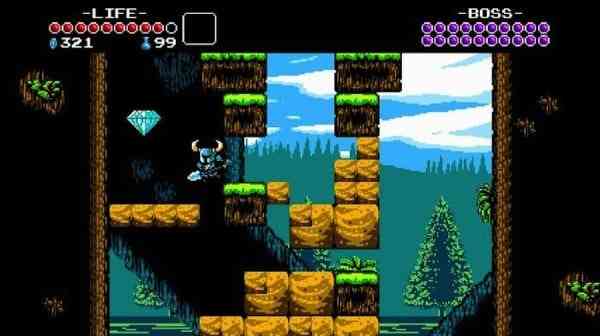 While there is no multiplayer content available at this time there is the promise of new modes and free DLC in the future. These promises are the result of Kickstarter stretch goals being met. For now there are feats and achievements to complete, which adds a nice replay value while waiting for the additional content to be released.

Presentation wise I was pretty impressed. The gorgeous retro graphics were simple yet stunning, using the very same colour scheme from the days of the NES. The 2D sprite based parallax scrolling effects of yesteryear will bring a smile to 8-bit gaming fans.  Shovel Knight can be played off TV using the GamePad’s screen, but in all honestly it doesn’t do it justice and is best played on the big screen. The chiptune soundtrack is also spectacular, and includes a couple of songs from the famed Mega Man composer Manami Matsumae.  I think that old-school gamers will appreciate the all the music and in-game sounds, while newer gamers will find something to enjoy here too.

At the end of the day I can’t help but love Shovel Knight. Maybe it’s because it reminds me of why I love gaming; the joy I felt as a kid playing games in a time when graphics and hardware didn’t matter. While paying tribute to the classics, Shovel Knight still feels unique with fantastic level designs that are extremely challenging and rewarding to complete. Add to that the beautiful visuals, a fantastic chiptune soundtrack, and memorable boss battles, it all adds up to Yacht Club Games love letter to 8-bit being an experience that one should not pass by.

Next Road Not Taken (PC) Review – This is One Road That Should be Taken!
Previous Pushmo World (Wii U) Review – Pull Blocks Here, Push Blocks There, Yep, You Get It.