Pushmo World (Wii U) Review – Pull Blocks Here, Push Blocks There, Yep, You Get It.

Why do I keep doing this to myself? I should really have learned by now that if Nintendo throws their tag on something I should just stop what I’m doing and play it right away. I know how this looks, but I don’t care anymore. I’m about as big a fanboy as they come, and I’m not ashamed of it. Nope. Not in the slightest. In years past I scoffed at Rhythm Heaven. I was wrong. I scoffed at Animal Crossing too. I was even more wrong. I was even so bold as to scoff at Pikmin. I was the wrongest (I know this isn’t a word, but it’s so descriptive) I have ever been. Teenage me was kind of dumb, but apparently adult me isn’t much better. Pushmo World is…well…it’s awesome.

The premise for Pushmo World is simple. Push and pull colored shapes out of a wall to reach your goal. While there are more mechanics in play then this statement lets on, it does give you a good idea of about 95% of the gameplay. Pushmos, as they are called, are colorful puzzles made entirely out of squares. Squares of similar colour fuse together to become one large mass, adding an element to this otherwise simple puzzle game. These coloured pieces can be pulled out a maximum of three squares from their starting point, giving you a limit to just how much can be manipulated. Similarly, pieces that have been pulled out can again be pushed back in. 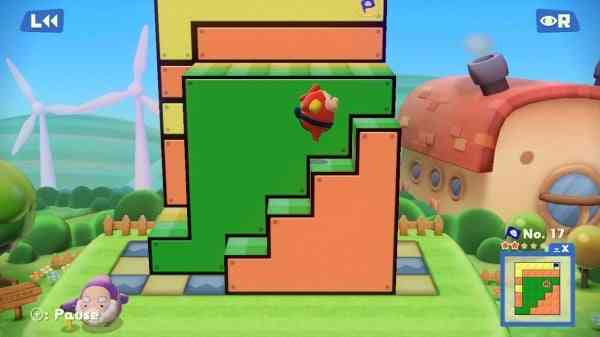 The easiest way to visualize this is to imagine everything in terms of identically sized cubes. Later levels add switches that can extend all pieces assigned to the particular switches color to their maximum, or have all pieces of that color retreat back to their starting point. In addition to switches, there are ladders which connect to other ladders of identical color somewhere else on the puzzle. And what is all this effort for? To get to the top of course! Each Pushmo puzzle has a goal point to reach (usually near the top), and it’s up to you to figure out how to scale each one. In some cases you will have to climb quite high with no means of doing so again should you fall. Luckily, Pushmo World has two built in failsafe’s to protect you against this. The first is a reset switch at the base of the puzzle that will reset everything back to its starting position. The second failsafe is more interesting. By pressing and holding the “L” button you can rewind time, saving yourself from having to do a particularly long puzzle all over again.

Pushmo World is deceptively tricky. It isn’t difficult per se…but simple looking designs may leave you stumped for longer than you’re proud to admit. Sometimes the answer may very well be right in front of you, but you’re literally looking in the wrong direction. Each level is quite clever, most utilizing every square inch of the game field in some way or another. About half of the featured puzzles in Pushmo World are generic colored shapes, but the other half are wonderfully crafted murals of everyday things. Some are animals, some are plants, and some are even vehicles. My favorite of these puzzles is the Cruise Ship, which is of quite an impressive scale. Pushmo puzzles vary in size, some quite drastically. The first Pushmo you’ll encounter is a mere 5×6 grid, while the ship I mentioned earlier is 32×18! Quite the difference.

What separates Pushmo World from most other puzzle games I’ve played is the ability to create and share puzzles of your own. The blocky nature of Pushmo proved the perfect canvas for 8-bit Mario, Link, Pikachu and Kirby puzzles. Once drawn out, and you’ve placed a goal and all the ladders and switches that your heart desires, you simply need to play it to unlock its unique QR code. This code can be shared with all of your friends or spread across the internet to the world. Pushmo World, using Nintendo’s Miiverse, has an online community called “Pushmo World Fair” where users can upload their self-made Pushmos for others to solve. Fans can also solve Pushmos made by others. After playing other users puzzles you can leave feedback on what you thought.  It’s a pretty neat feature. 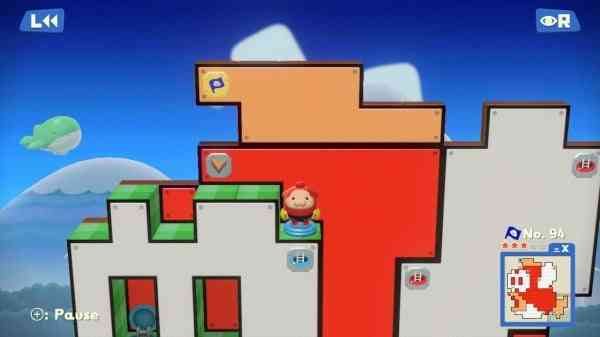 Pushmo is all about primary colors. It’s bright, colorful, and loaded with Nintendo charm. While the puzzles in Pushmo are all square and rigid, the world around them is not. There are few environments in Pushmo World, but it’s clear they were designed to be the opposite of the puzzles. They are designed in such a way that they are likely to give you more of a balanced visual aesthetic. There seem to be only two to three stages on which you solve puzzles; one for single player, one for online play, and one for Pushmo Studio (The mode in which you create Pushmos). The characters are round, wiggly, and adorable. Mallo, the protagonist, even wears a Sumo Wrestler’s attire.

Music, like the environments, is limited but well done. The entirety of the game likely features no more than six to seven different musical pieces. Music in puzzle games has my respect because it has to be done in such a way that can’t sound repetitive while being able to actually repeat itself over and over until you figure out the puzzle. Pushmo World solves this by invoking tunes that are catchy. Often times I found myself humming along until I could solve the puzzle I was working on. Therapeutic Witchcraft I tell you!

My experience with Pushmo World was one of pleasant surprise. I’ve seen previous Pushmo games from afar, but never bothered to give them the time of day. If I had to find something to complain about, it would be that it felt too short. I blew through all of the premade puzzles in little time, but this did give me more time to work on my own creations, as well as play the Pushmos of others. For $9.99 the value Pushmo World offers is incredible. You effectively get endless puzzles to solve, and endless puzzles to create. And did I mention the Characters are wiggly and adorable? I give Pushmo World three thumbs 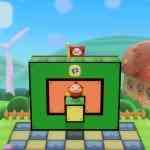 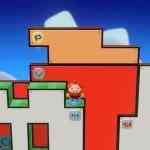 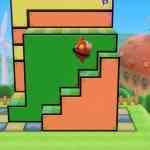 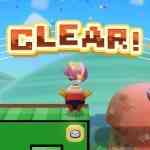 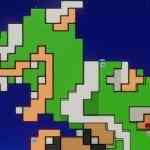 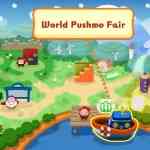 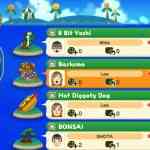 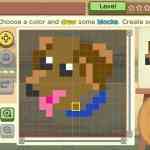 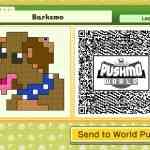 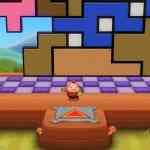