Road Not Taken (PC) Review – This is One Road That Should be Taken!

With the huge growth in indie game development, quite a number of them have gone the roguelike route. For those who don’t know, roguelikes are games that randomize the set-up of the game’s environments (and sometimes the characters and/or rules) each time you play, but each play-through is a learning experience that can potentially help you advance farther next time. Normally roguelikes are platformers, but I had the chance to play one that was a puzzler: Road Not Taken – a stylish game where you take the role of a ranger whose job is to rescue lost children in a dark, cold forest after a blizzard. There are other mysteries yet to be uncovered in the game too throughout the course of your adventure.

At the start of the game, your character stumbles upon a snowy village where at first they don’t take kindly to strangers. The town itself is small, but has various NPCs wandering around that you can chat with and are willing to trade items you find in the forest for upgrades to your health or other charms that will aid you. After you talk to the village’s mayor, who tells you about the missing children, you are brought into a tutorial of sorts that will introduce you to the mechanics of the game.

Here you will have to hunt down and bring back the children to their parents or back to the starting point. You can pick up objects and either walk with them or throw them – but there is a catch. Lifting and carrying certain items can drain your life meter, so you need to keep a close eye on it to ensure it doesn’t run out, or it is game over and the game resets from the beginning.  Enemies can also drain your meter if you bump into them or aggravate them in some way. Another tricky mechanic is that when you want to throw an object in a certain direction, you need to be behind it, so you may need to shuffle things around to get yourself in the right position. Also you will find yourself picking up more than one item at a time if another item is right next to you. This applies to all objects that are one square above, below, left, or right of you. You can move with one or more object but only if you have the space on the map because items, animals, and children do not pass through each other.  It all may sound insanely difficult, but the learning curve is very manageable, and when you figure it all out is quite satisfying.

There are a set number of children to find per level (or year, as the game calls them). You do not need to find them all, but doing so will reward you with better loot that you can use back in town.

The levels are normally made up of several areas that are linked together by pathways that sometimes need to be opened up by placing together certain objects or animals. Often you will find you will need to go back to another area for a specific item to bring back with you. I enjoyed exploring the levels, not knowing what I will come across.  You will also be doing some collecting as you explore.  Every item, object, animal and person you come across will be added to your book as a record of your adventure.  At one point I was really obsessed with trying to find everything, because since the levels are random some things may be a rare spawn, and I didn’t want to miss them! 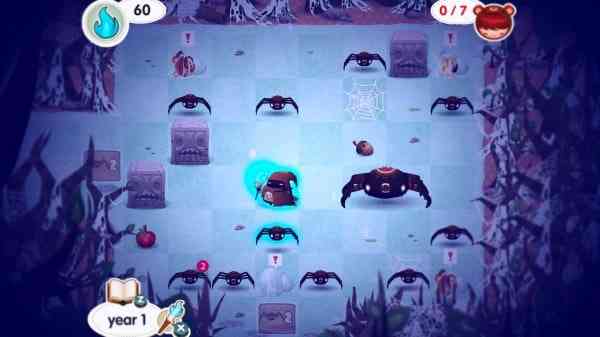 There are a lot of items in the game, so other than your handy journal, the game gives you a house to place charms in. You can only have two of these charms equipped at a time, but you can swap them out between levels. I really suggest talking to the NPCs that wander around the village because they like handing out items which you can give right back to make them happy, leading to more upgrades for yourself.

Like with other roguelikes, when you die you start all over again – with a different forest layout and various other NPCs that will be wandering around. I did feel slightly frustrated after dying because I knew coming back I would have to talk to everyone again to upgrade myself, but I kept coming back anyway and learning from my mistakes. This shows the signs of a well put together roguelike experience.

The overall appearance of the game looks like it could be straight from a fairy tale. The humans and forest animals all have cute character designs, with entertaining animations and personalities. I found myself chuckling at the actions of the woodland creatures and other monsters that were roaming about. Although the levels were random each time, their designs were always well laid out and very clean to look at.  If there was one area where I think the game’s graphics could be improved, it would be the environmental graphics, to give them just a bit more detail to match the animals and humans you interact with. 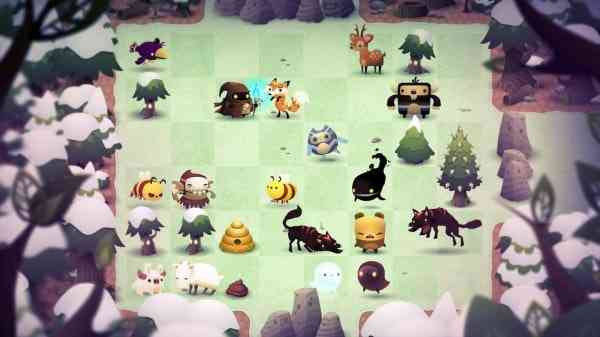 While roaming the forest looking for children, avoiding nasties, and throwing objects around, you will be treated to some really nice atmospheric – and at times, quite creepy! – music, which fits the game perfectly.  It gives a great feeling there was real peril. All characters and creatures, good or bad, have some of the cutest sound bites I have ever heard. There was joy to be had talking to certain critters over and over, just to hear their amusing sound bites.  The developer even held a contest for people to send in their own sound sample to decide what the fox character would say!

So in the end, Road Not Taken is a very charming and entertaining puzzler, with a deeper mystery behind it yet to be solved. I will definitely be traveling this road more than once, and you should too!

Next Diablo 3: Ultimate Evil Edition (PS4) Review – The Most Fun You’ll Have Demon Hunting this Year
Previous Shovel Knight (Wii U) Review – An 8-Bit Inspired Game that has a Classic Feel for Those to Love