Diablo III, the long anticipated sequel, has finally come to current gen consoles in the form of the ‘Ultimate Evil Edition’. The original game comes with the ‘Reaper of Souls’ DLC and it is something to dive into. Picking up 20 years after Diablo II, the third game in the franchise drops you back into the world of Sanctuary as angels and demons continue to wage war as humanity stands in the middle. It’s a good thing you’re one of the heroes and can set things right. As evil threatens the world, you must band together with your allies and stop the destruction of not only your world, but the heavens as well.

Diablo III was ported over from its PC version that was released back in 2012. Usually in port version of games, there tend to be some issues in the transfer, but this game seems to have avoided them. I personally haven’t sat down with the PC version of the game, but as I worked my way through the MASSIVE game, not once did I see any bugs or issues in the many, many, many hours I logged on it. With that in mind, the gameplay is the same as it is on the PC; locked camera, multiple characters on screen, massive amounts of death and destruction, so on and so forth. Basically, everything I wanted from a Diablo game. I’m a big fan of the action-RPG style and have wasted many hours on Diablo II, so I was pleasantly surprised at the ease in which I was able to slip into the console version of the sequel.

The story follows your hero as he tries to defeat the last of the Evils of Hell and rid the world of demons forever. The storyline itself is surprisingly pretty by the books; hero vs evil, battles, meet allies, bigger evil, and conclusion. Anyone familiar with other action-RPG’s can pretty well play out the entire story line simply with those words, which I was disappointed in considering how long it’s been since Diablo II. Of course, there was an infinite amount of lore in the game. Pretty much anything referenced is about the other games or something in the world’s history that you would’ve learned in the other games, so unless you’re up to snuff on Diablo legends (I’m not), things might get… confusing. Considering how much time and effort was spent incorporating the lengthy history of Sanctuary into the game, I guess I wanted something a little more in depth from the story department but it was a bit lacking. 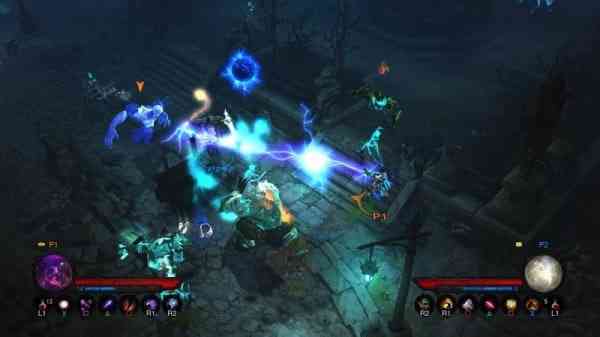 The gameplay, on the other hand, absolutely was not! I couldn’t get enough of it. While it was the customary eye in the sky as your characters work through the evil minions, Blizzard ramped up the amount of minions you would fight. I can’t even tell you how many times I was in a narrow hallway as a literal horde of demons came my way. There were several points where I and my partner both went on a 50+ kill streak. It’s pandemonium in those dungeons (not to be confused with the Pandemonium in the actual game)! While I was cutting through entire armies and wading through the subsequent rivers of blood, I was also very pleased to discover just how awesome the loot system was. There was an abundance of armour, weapons and jewelry dropped from every battle, and while most turned out to be scrap or sale bait, every now and then you would find a beauty of an item. There was never a time that I wasn’t decked out completely in top notch gear and even then I’d find a rare item that would completely blow my current gear away. It wasn’t just a ‘later in the game thing’, either. I found a shield at level 3 that was better than anything else I picked up until level 21. It made the game much more enjoyable to be constantly looting and finding gear that was worthwhile as opposed to other games (like my beloved ‘Oblivion’) which will always gift you with gear, but only once in a blue moon would it be better than what you already had.

In addition to picking up lots of loot, back at camp you have both a blacksmith and (eventually) a jeweler who will craft gear for you and add gems to boost your abilities, respectively. The jeweler was quite helpful as he could boost whatever ability you chose for that weapon or piece of armour you gave him. However, the smith was basically useless since anything you found in the field was better than anything he could make at the maximum amount of training he had at any time. Another aspect of the gameplay that I really liked was the way they used the skill tree (or the approximation to a skill tree they have). While your available skills are limited to the amount of buttons you have on your controller, each button also has 4 alternates that you can swap in and out. In addition to that, each skill can be equipped with one of four accompanying rune stones as well as being able to choose passive skills as well. The best part about this was, once you’ve picked a skill, you weren’t stuck with them like in other games. Literally at any time in the game you could hit the menu button and put together another group of skills and see what works best for you. Since they didn’t have a massive skill tree like others have, I thought this was an inventive way to keep you involved in your skills, even if you don’t get a ton of them. 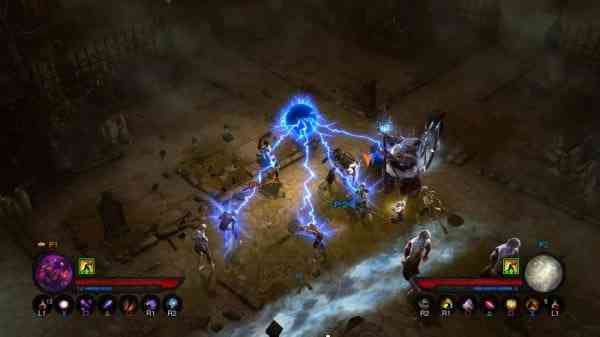 Possibly my favourite addition to the game was its multiplayer options. If you wanted to play with a group (which is infinitely more fun) you could do it online with either your friends or with random people or you could simply play it offline in the comfort of your own home with your friend on the couch. In a time where games are focusing more and more on digital copies and online co-op, it was refreshing to sit down and have a good old fashioned couch co-op for endless hours. It’s something I didn’t even realize I had missed until I was sitting there and not needing to worry about my mic or internet connection to have a good time playing with a friend.

The music for the game was also very good. It was a perfect soundtrack to whatever was happening on screen. Often times, the best music in a game is the one you don’t realize is playing until you’re humming it. This is what happened in Diablo. The various dungeons had different music depending on whether it was relative to the story or not, but regardless, it was perfectly paced to keep the game from being too frenetic and to keep you from zoning out. While the graphics weren’t out of this world in the gameplay due to the style of game it is, the cinematic graphics were incredible! They looked absolutely gorgeous. They looked so good, that I actually got excited every time a cinematic came on. Sadly, they were pretty far apart, but I felt that actually made me more excited when they finally did come, making them that much more enjoyable.

Of course, there are some real downsides to the game which kept it from being as beloved to me as say, ‘Skyrim’. First, was the issue of the set buttons. While I did enjoy how they handled the skill tree in regards to the buttons, I wasn’t really happy with how it factored into the gameplay. Too many times I was facing a mini boss and a legion of minions that required me to just repetitively hit X and then my skill buttons once the cool down time was done. As much as I enjoyed the gameplay in most areas, I got bored in many of the bigger battles as they took a long time which just left me standing in place tapping the same button until I finally killed my foe. 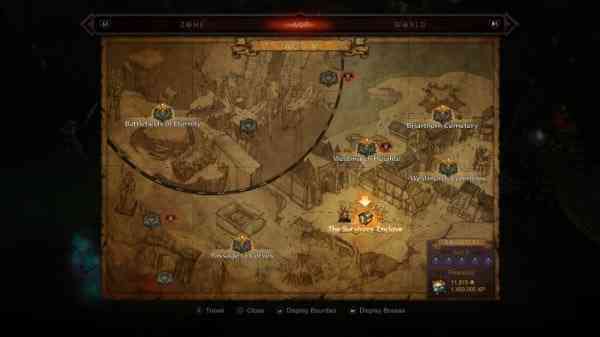 Second, there was also a lack of physical customization in the game. I realize that each character has a set storyline with unique interactions with NPC’s which helps the replay value, but I didn’t understand why you couldn’t at least customize the appearance of your character. There is a really cool option that allows you to modify your armor into pretty much anything you’d like (someone made an awesome Thor Barbarian!), which probably works out better since you most likely have a helmet on the entire time, but I do enjoy making my own faces in games, so I did miss that aspect.  Thirdly, unlike the aforementioned ‘Skyrim’, Diablo III is actually quite linear and it uses its length and formidably sized maps to masquerade as a more open world game than it is. There was no ability to wander around and do side missions since there weren’t any. Sure, occasionally there was a secondary objective you could find on some of the maps, but 3 minutes of taking a different hallway doesn’t exactly count as a side mission. Lastly, the dialogue box conversations without dialogue trees felt pretty dated. Of course, the voice acting was also very dated, so I guess they worked together to make me feel like the story was unfolding circa 2001 just with better graphics.

Overall, I had a great time allowing Diablo III to steal my life. With its action packed dungeon diving, very engaging loot system and allowing you the ability to sit down and play with friends on your couch as well as playing online, this game chewed up entire days of my life before I realized I hadn’t eaten in 27 hours (sadly, true story). Although it did have some drawbacks with  its rather linear storyline and the somewhat repetitive button mashing it is still going to be one of the most fun times you have slaying demons with a friend this year. I can also guarantee that you will spend shocking amounts of time in Sanctuary and never realize how long you’ve been playing until you see it’s 4 A.M… again. Ultimately, isn’t that what we all really want from a game? Diablo III: Ultimate Evil Edition comes out August 19th. I recommend you pick it up!

Next The Swapper (PS4) Review – Insert Jokes About Cloning Yourself Here…
Previous Road Not Taken (PC) Review – This is One Road That Should be Taken!