I enjoy a good shoot ’em up every now and then. One of my all-time favourites was Konami’s Contra for the original NES where you jump, run and shoot alien forces using a multitude of weapons. I played that game to death and it certainly made a lasting impression. That was some time ago and over the years we have seen many side scrolling shooters much like my all-time favourite.  Recently I had a chance to check out Ubisoft’s original game “Shoot Many Robots” (SMR) which arrives as digital download for the PlayStation Network.  Much like the days when I played Contra, I have to say I had a heck of time playing this side scrolling shooter for the PSN.

In SMR, you play as redneck P. Walter Tugnut who is up against hordes of killer robots that want to slice, dice and shoot you to death. Your job is to get them before they get you. Lucky for you, you’ve been preparing for this day and have at your disposal lots of weapons and equipment stored in your RV (including beer). 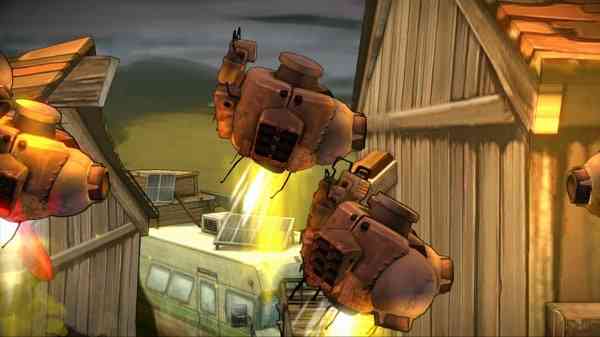 Like the games of old, SMR is a “run and gun” side scrolling game. Players start with a submachine gun and a rocket launcher.  You shoot, jump, punch and slide your way across the land while destroying (they refer to as murdering) as many robots as possible.

The controls are easy to learn with the left analog stick controlling your movement and aim, while pressing and holding down the L1 button leaves you stationary to shoot at your targets.

You start the game with a submachine gun as your primary weapon with unlimited ammo and a rocket launcher as your secondary weapon with limited ammo.  As you progress you can upgrade and purchase better weapons such as pistols, automatic rifles, mini-guns, shotguns, freezing guns, flamethrowers and other means of destruction. Weapons and other equipment can be purchased with the use of lug nuts dropped by the robots after you destroy them, with additional multiplier bonus points for consecutive kills. Additionally, the more robots you destroy the more you level up which in turn makes you more powerful and gain access to more powerful weapons. Also, performing well in the levels gives you star’s that open up new levels on your map. 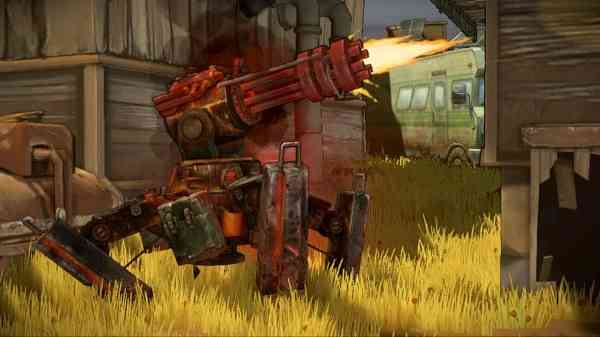 The levels themselves are divided according to various checkpoints where your ammo and health levels are replenished. If you receive damage, beer serves as the medical packs, which restore some of your life. The levels also have various item boxes that provide temporary bonuses such as faster movement, higher jumping and more powerful shooting or punching (which can be used to deflect rockets back to the shooter if timed correctly).

All the weapons will come in handy considering the robots are numerous and often require several bullets to take care of just one. They also tend to come in waves, different sizes and specialities. Some fly and shoot rockets while others chase and jump after you with chainsaws. Some are larger in size and are tough to kill while others are small and require some precision in terms of your shooting. For the ones that do chase you, they will attempt to swarm and overpower you, which require a lot of jumping and shooting from high elevations wherever possible. In that sense, SMR is not just another shooter like the old school games but one that requires a little bit of thinking, strategy and fast reactions. Regardless, the action is fun and I did not get tired of shooting down the countless number of robots that came my way.

SMR is a game that does not seem to take itself too seriously. The main character is a crazy redneck hillbilly with his hunter vest and cowboy hat.  Players can customize his look with outlandish clothing and accessories (fairy outfits, paper bags, Viking helmets and more).  All this adds to his unique style and more importantly your stats such as jumping higher and moving faster. The weapons are described with attributes that include their rate of fire. Despite its humour, the action is fast paced enough that you have to take it seriously if you want to survive. Some levels can be a little challenging, especially if you made the wrong weapon of choice. Multiplayer mode also enables a mix of co-operation and competition as you strive to get more nuts than the other guy, which makes the action more chaotic and frantic. 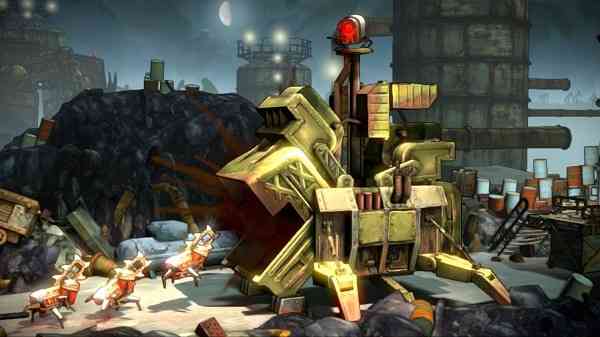 SMR’s characters and environments look like they are from a comic book and really pop out. The environments are detailed and well-drawn especially since it looks like the setting takes place in some backwoods state. The robots are well designed and are full of character.  Not to mention the bosses look sharp as well.

The sound effects in SMR are done very well as I never seemed to get tired of the sounds of bullets hitting against metal or the explosions from the result of a well-placed rocket. The music is appropriately stereotypical “red neckish” with a mix of banjo and country twang that keeps the pace well.

One area that could have been improved was the speed of your character.  I just found he runs a tad slow and brings down the pace of the game a little.  Sure it adds more suspense as the robots tend to be faster than you (hence run and gun); however, the ability to adjust your characters speed may have been a nice little addition.

Overall, Ubisoft’s “Shoot Many Robots” is a fun side scrolling shooter that has a retro feel and nicely blends humour with action.  When you consider the games $10.00 dollar price tag, “Shoot Many Robots” offers up plenty of value and is accessible to any gamer who is looking for some mindless robot killing carnage.  At the end of the day you can download Shoot Many Robots with confidence.