We heaped high praise on F1 2011 when we first reviewed it for the Xbox 360 back in September.  Since then the 2011 F1 season has long subsequently finished and we are just weeks away from the beginning of the 2012 schedule.  This hasn’t stopped Codemasters from bringing F1 2011 to the Sony’s handheld arena alongside the launch of the Vita though.  And you know what?  It stands up pretty well to its console brethren.

As a fan of racing games, I find myself being drawn towards those games that focus more on the racing than the collecting and customization.  While their sense of speed and simulation are top notch I’m no fan of the grind found in games like Forza and Gran Turismo.  I’d much rather get right down to the racing.  From the get go this is exactly what you do in F1 2011.  If you’ve played the any of the home console versions of F1 2011, everything will feel familiar on the Vita.  There are options to play single events, a full season schedule, online and more.  The biggest difference is the graphical representation of the paddock area of the console versions has been replaced by a menu system.  The rest of the features are intact except for being able to interact with media.  The real meat of the game is the career mode which spans several full race seasons.  Initially you start out with one of the lower performing teams but you will work your way towards racing for a top tier team like McLaren, Ferrari, Red Bull and a shot at winning the driver’s championship.

Race weekends are faithfully represented with multiple practice and qualifying sessions before each race.  Depending on how you set up and play the game (difficulty, race length, etc.), you may find you spend more time in these sessions than you do actually racing.  I also found the default difficulty a little too easy.  Accomplished racers will need to up the difficulty in order to feel like they are being challenged.  Otherwise you’ll be starting on pole and driving away from the field even with the weaker teams that are available when you first start out. 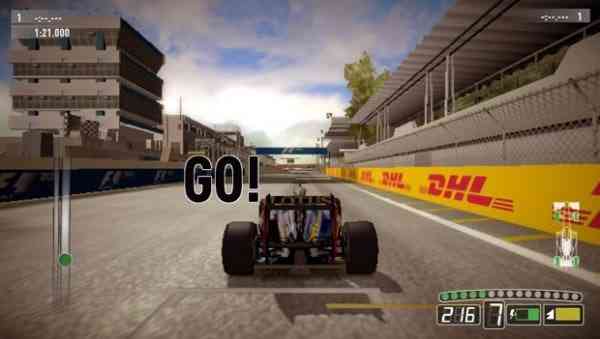 Helping to break up the routine of season and career play is a Challenges mode.  This is essentially a number of mini-games that you can play.  There are fifty or so challenges spanning across ten tiers.  Challenges include such things as checkpoint races, timed runs, obstacle courses and “pass X number of cars”.  They are generally pretty quick to play and you are ranked from A to E in each challenge.  You must achieve a grade of at least C to move on to the next set of challenges as you progress through them.  If you’re looking to play online, F1 allows you to play with up to three other players either online or via the PS Vita’s ad hoc connection.  Each player must own a copy of the game for ad hoc mode.  Codemasters generally does online play pretty well, but despite attempts to try the online I was never able to find a public game.

I found the control of F1 2011 on the home consoles a bit twitchy and I was concerned a little bit about how playing on the Vita would feel given the smaller analog sticks and the associated travel in them.  Well, I must say that the control with the PS Vita’s analog stick is excellent.  After only a few sessions I was impressed with just how precise you can be putting the car where you want it go on the course.  You do lose the precision of controlling the throttle and braking on the triggers  as these controls are mapped to the face buttons on the Vita, but it really isn’t much of an issue.

This is my first Vita review so I don’t have a lot to make comparisons to, but after playing F1 2011 I have to say that the developers have squeezed a lot of visual detail into this portable version of the game.  Things aren’t as pretty as what you see on consoles, and that’s expected, but the action moves along onscreen quickly and smoothly and it really doesn’t look that bad at all.  There’s plenty of detail too including excellent trackside detail with no pop up and there is detailed, animated steering wheels complete with reflections when the light hits it right.  F1 is playable from any of the views including a driver’s cam and, my favorite, from just above the driver’s head.  What does take seem to take a visual ‘hit’ in the move from consoles to Vita handheld are some of the textures, especially on the cars, and definitely the rain effects.  Don’t get me wrong, things still look impressive given that you’re playing on a handheld but it is definitely a step down from what I called the best wet weather effects I’ve seen in any racing game to date.  I also noticed that the animation of the front tires steering is a little exaggerated.  A minor quip, yet, but something I did notice. 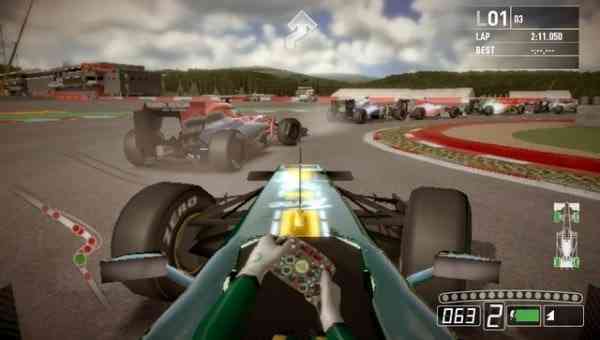 Beyond the unmistakable scream a F1 car makes there isn’t much to talk about when it comes to the game’s sound.  There’s some token dialogue from your team from time to time and there is a forgettable soundtrack.  For me it really comes down to perfectly representing how an F1 car actually sounds and they’ve got it right.  Play this game with headphones for the full experience.

Even if it the rosters are about to become dated, F1 2011 for the PS Vita is still a good racing experience.  Quality visuals and good controls are the highlights, especially considering it is being played on a handheld.   It might be a little repetitive for marginal fans that have played the console version before, or those that might not necessarily be hardcore fans of the sport.  In the end F1 2011 is a good game if you’re looking for a realistic racer on the Vita, but I do admit that being this close to the next season I would have loved to see the 2012 teams and drivers included.