The story of Street Fighter X Tekken is about a box called Pandora. One night in Antarctica, Pandora fell from the sky and word spread that there was a mysterious box that possessed some type of power unknown to the fighters of the Street Fighter or Tekken series. It is claimed that curiosity about the origin of the box, as well as the power that may be contained in it led to those who sought to rule the world with unrivaled power to seek it. 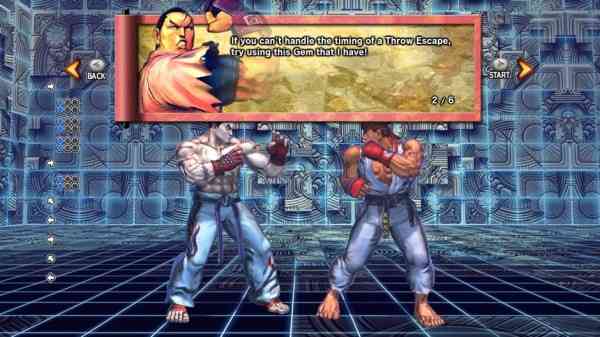 Street Fighter X Tekken is ultimately about kicking your opponent’s butt; the focus is on the battle and not the story. As such the story is limited to a small segment of the character’s background or purpose in seeking Pandora, with the ending being what they do after they attain it. I didn’t really care about the story as it was generic and did little for the game except provide a reason for the new development ‘Pandora’. The story itself made sense to me, but for those that do not know much about fighters or the stories in the previous series they may be lost with certain references.

In story mode, you have the option of fight requests. You can actually set up a match online in-between story fights and go back to the story once finished. There is only one issue with this, and it is that online matches interrupt your current fight. This would not be so bad if you only had to redo the round, but you have to redo the entire match every time it happens. And it happens a lot. You should be able to complete the story mode with your characters within about ½ an hour, that is, without fight request. It was enjoyable, but like all fighters, it becomes stale once you can easily beat the AI.

Adding to the fray of special moves are new additions, like “Super Arts” or “Cross Assaults”. Street Fighter X Tekken is innovative in that if you end a normal attack combo with two heavy hits, you will launch your opponent into the air and switch to your other character to continue the combo. Moreover, you can use both your characters to create a devastating combo called a “Cross Art”. Another aspect is Pandora, and it will give you a massive increase to both health and power, but you have to sacrifice your other character. The unfortunate part is if you take longer than 10 seconds to finish your opponent you collapse and lose the round. This would be better if you were given 15-seconds or if you did not die at the end of using Pandora as it is an awesome thing to use online, but people will just block and run away from you until you collapse. 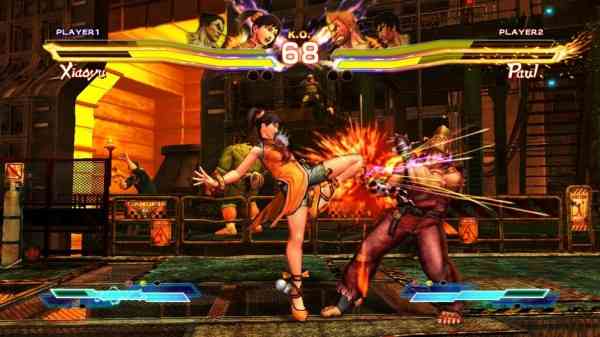 In regards to the computer AI, you can fight it in story or versus mode. Thankfully, you can set the computer’s skill level from easiest to hardest. Expect to have your butt kicked if you decide to go on hard, as the programming is challenging but not too tough or cheap. Versus mode is where you and your friends can fight against each other as well as against AI-controlled characters; moreover, you are still in control of the AI difficulty.

When it comes to the single player modes, there are tons of modes available – story, training, challenge (which includes missions, trials and tutorials) and network battle. Mission and Trial modes require you complete certain battle criteria or combos to assist you in learning the game and becoming more proficient at fighting. Training mode also allows you to practice new combos, try out new moves and characters safely without being punished for messing up or having someone fight back. Street Fighter X Tekken doesn’t strive for balance as its counterparts do, as gems and combos can be used repeatedly for advantages.

The options menu customizes your titles, sayings, and gems. Gems are a new feature and are little boosts that help you out after meeting criteria in one of five ways: attack, defense, speed, vitality/health and meter. Depending on the character and how you play, this could be a death sentence to your opponent or help you survive an onslaught. Also, there are gems for those who are not particularly good at fighting games, which streamline the unique moves and combos for a more enjoyable experience…at a price of less damage.

There are good aspects and some that needed polishing. Different character designs for the 43 (45 for PlayStation 3) characters was great! Instead of keeping the detail of either series perfectly, they decided to make a cartoon-like style that is more akin to the older fighters. Fans of previous fighting games will likely consider this style as a bit more artsy as opposed to authentic. 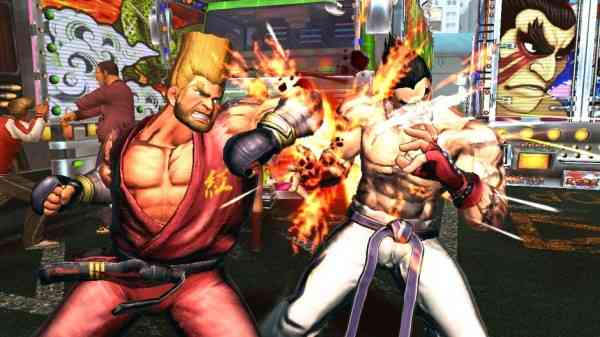 Full-colour customization is new in Street Fighter X Tekken – you can customize the skin, accessory, and costume colour for both Street Fighter and Tekken characters. This adds a level of personalization and thoughtfulness to the game. It can also add to the gameplay as characters can now blend into the background somewhat. Not all characters are created equally, and some character designs and CGI are more akin to their namesakes than others. There were some ‘blocky-ness’ to certain characters, but it was barely noticeable.

Each individual level is unique and interesting. Further, they incorporate posters or characters from each series. The stages are more akin to Street Fighter’s as they have limited movement but are flashy and interesting. One issue with the backgrounds is that they are TOO distracting – so much is happening in the background that it becomes hard to focus on the fight.

Street Fighter X Tekken has more choppiness than flow; each individual hit has its own importance and emphasis. This is both a good and bad thing – one can now easily see where/if attacks hit as well as the time delay allotted for continuing a combo. 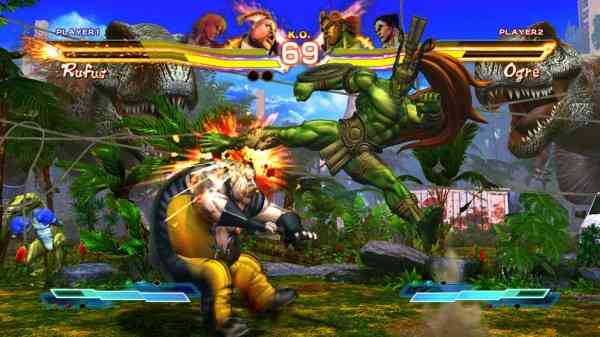 Music, much like Street Fighter 4 and Super Street Fighter 4, was a large part of the opening cinematic; ambient music played to a montage of fights between characters was replaced with a power-metal anthem named “Honest Eyes”. The song does its duty in pumping up the player and getting them ready for the fight and was great. As for the background music, most of it is a mash-up of the rhythm-based electronic ambience with dub-step. It’s quite an interesting mix, and suits the game well.

Sometimes the music is spot-on with the action and you can clearly hear the music in between painful groans and weeping but sometimes not. Unfortunately, not every background song is at the same volume level, and it can be very distracting when going from playing one map/location to another.

The music overall is hit and miss. Animal sounds as well as irregular rhythms and sound-mapping can seem strange. Sound-mapping is the changing of music/sound with changes in the background; a building might open up and switch the background music completely. This can, in turn, throw off your combos or make you doubt that your attack will hit because of the sudden shift in time signature/sync. Sometimes it adds to the overall feeling of the environment and helps to pump you up for the fight, whereas other times it replaces your focus more on what is occurring in the background than on the actual fight. A bit more polish and synergy between the backgrounds and the music of the stage levels would have not only assisted in the atmosphere  but would have also made the level feel more authentic instead of feeling disjointed and apart from the music.

As for the voice acting, each character is given two languages – English and Japanese. By default, each character starts with a Japanese voice. The Japanese voice seems to be off namely because it doesn’t really suit some characters (see Hugo, for one) but overall it is decent. As for the English, some characters are so over-the-top with their accents that it is ultimately annoying to listen to them. Other characters seem to be quite flat in the voices (Ryu and Kazuya) where their phrases are not only unbelievable, but ridiculous.  Overall, the English voices do lack a sense of urgency and strength but some characters are great. 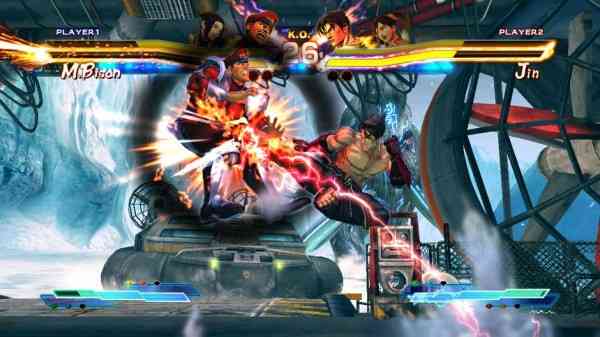 The sound effects are absolutely great. Lightning sounds like it is charged and ready to zap, and even the gem system gives the notion of brilliance in sound. Although, when a character is launched, the music goes quiet. This does not fit in the game. Also, when you chooses your fighters, there is about four seconds of heavy and powerful sound then silence until the battle loads (which is about another 7-15 seconds). The sound effects can sometimes sound isolated (as if created in a sound room) and ineffectual (see Rolento’s stick-jump for an example).

I should mention I did notice an issue with sound cutting in and out online – sometimes it is the music, sometimes the special effects and sometimes the voice acting. At least one of the three is cutting out either partially or entirely at one point or another during each online match. The sound online is very disappointing, especially if you use sound to assist in your fighting style.

Street Fighter X Tekken does a wonderful job at advancing the fighting game genre.  The range of customizations, crossover moves and new combos is impressive.  The fighting is enjoyable and the variety of ways in which you can punish your opponent is endless.  This being said, I took issue with the exploitable imbalances, “infinite combos”, some of the lag and choppiness; and elements of the games sound did not work.  I cannot help but think the game could have benefited from a few more months in the shop.  Nevertheless, Street Fighter X Tekken is still a highly enjoyable game and one that should be considered a very good fighting game experience.