Soccer, or more commonly known as football in Europe, is one of the most popular team sports around the world. I imagine it is because all you really need is a ball that you can kick, have agreed upon markers to score on (such as two sticks in the ground) and an area to play in. In fact, unlike a lot of sports, soccer can be played on almost any hard surface and in most types of weather. As long as there is space to kick and run around, you can probably play it, which makes it an ideal and an accessible sport for almost anyone. Unfortunately, the same cannot be said about FIFA Street for the PS3, the latest from EA Sports.

While it has been about four years since the previous FIFA Street was released, EA Sports latest game is considered a reboot for the series. Like its predecessors, FIFA Street involves street soccer, which is different from typical FIFA soccer in that it is not played on a large pitch, does not have the standard 11-person team or even a referee.  Despite not being able to play a conventional soccer game, in FIFA Street you can play with various rules and different scoring systems such as “Futsal” (5 vs. 5 or 6 vs. 6); “Panna” (trick scoring); and “Last Man Standing” where each time you score, the teams get smaller until you play one on one. 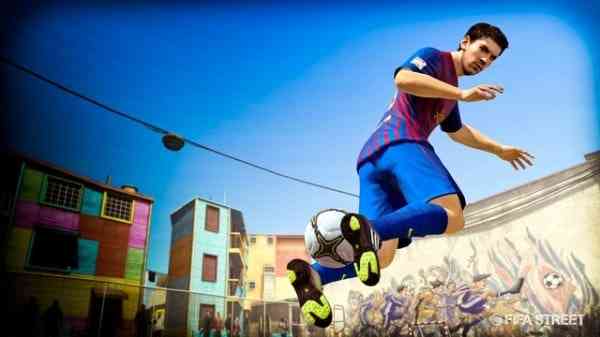 There are several modes of play available including “World Tour”; “Hit the Streets” or a single exhibition match; a practice mode; and an online multiplayer mode. In World Tour, you pick your country of origin and a region to start your career.  From there you create and customize your player where you can then compete against other teams including real street players and stars from the world’s top clubs. As your team progresses and you win challenges, you unlock items such as new clothing and accessories for your squad; gain access to teams and venues; upgrade your players’ individual stats (such as their shooting or passing skills); and add players from the teams you have beaten.

One of the biggest features of FIFA Street is its network connectivity in the Street Network. For example, in single player mode you can create your club and compete against other teams not just from the game itself but also from your friends’ teams on the network. Your progress in the game is also shared online through the Street Network where you can view your friends’ progress and compare how well you are doing on the Friends Leaderboard. Head to Head Online Seasons are also available where you compete in Futsal matches where you can advance to compete in Online Cups.

FIFA Street also boasts authenticity and a departure from the less than realistic previous Street games and it shows. From the players’ styles, the venues and using real street soccer players, FIFA Street really makes it seem like you are playing street soccer as it is experienced in different parts of the world including the use of the FIFA gameplay engine and the introduction of Street Ball Control.

In Street Ball Control, players can bait and beat their opponents by moving the ball backwards, forwards, and side-to-side in a stationary position using the right analog stick (RS) until their opponent makes the first move. When they do, you can quickly launch a counter and move past the defender by using a “Panna” (passing the ball through their legs) or other trick moves such as passing the ball over their head. Players can also dribble the ball and move around using the left analog stick (LS), juggle the ball using the R1 button, and add “flair” using the L1 button. Tricks are a huge component to street soccer and in the Street series, but the reboot makes them more realistic and varied. The other buttons are to shoot, pass, lob, tackle and switch your player, depending on whether you are on offence or defence. Different strategies can also be employed depending on your style of play. 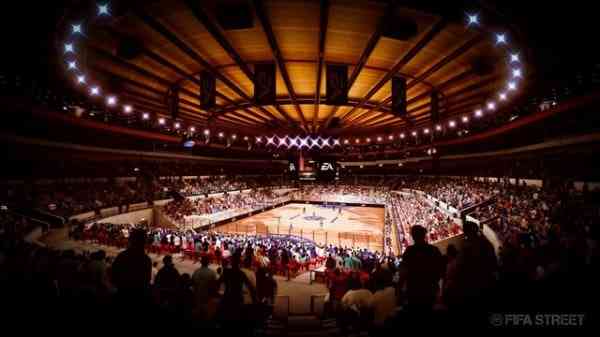 Combined, FIFA Street brings a lot to the table with its customization, many unlockables, online sharing and competition, street authenticity and realism. However, actually trying to play this game can be difficult, especially if you are new to the series. I found mastering the Street Ball Control and successfully pulling off tricks without having the ball stripped from me was indeed quite challenging. It seemed in their quest for diversity and authenticity, the developer’s packed in too much including: 9 “fundamental” or basic movements for offence (all relative to the attacking angle or which way you are facing); a reported 50+ skill moves; and additional aerial skills such as juggling the ball and the associated tricks that go with that. It’s a wonder how I managed to get the ball past any defender without confusing myself and whether to stop and use the Street Ball Control and attempt to deke out a defender or just dribble it along and hope for the best. I regretfully often did the latter when I became frustrated that my street moves were not successful.

Now I realize that playing real street soccer with the pros requires one to have fancy footwork in order to get past the defender to score. That being said, I wish I could have performed these moves with more ease (without having to be a pro myself) while still being able to appreciate their real-life difficulty. Instead, what often happened was I that I would quickly pass the ball and attempt to rush through and shoot in the general vicinity of the goal, only to find even doing that is harder than it looks. For example, if you hold down the shoot button too long, not only does the ball go faster (as it should) but also much higher which ends up having the ball go way off target or sometimes out of bounds. Since that was the case, I ended up often just pulling the intensity of my shots that were easily saved by the goalkeeper or a defender. While I commend EA in trying to replicate the depth behind the game by adding the intricacies into the controls and demonstrating that these moves are done by real people, I just found myself showing how little I can do.

That being said, there is a sense of satisfaction of getting past the opposing team and managing to score, whether it was planned or was the result of a fluke play. My matches were exciting and kept me on edge considering they were often low scoring affairs (from both ends) and short, only about 5 – 6 minutes long.

Graphically, the game looks realistic and the players do not look “cartoony” but rather they look like real people from a distance. The detail in the environments is impressive and certainly captures the appropriate setting of time and place, whether you’re playing in an urban concrete courtyard at night in the city or in a stadium indoors. For example, considering I am a Canadian boy, I decided to start my World Tour in Vancouver, BC and play in the fictional Justin Chan Memorial, EA’s tribute to one of their own as Chan died last year. Not only does the memorial venue look great in terms of “yeah, I can see that in downtown Vancouver somewhere” but you also notice that the developers were able to provide this sense for many of the venues from around the world. I did wish they had more of a dynamic camera view as you played (there is two – a side to side and an up and down view), the video replay feature makes for an interesting experience as you can later share your highlights on the Street Network for others to marvel and admire your play. 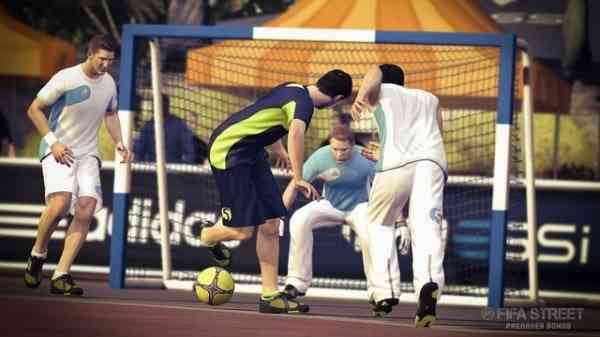 Sound wise, the music in any EA sports game is top notch and FIFA Street is no exception.  Using established artists from around the world, FIFA Street uses the music to its fullest with an emphasis on urban beats that represent each country well, whether it be from Brazil or Japan. The sound effects are great and realistic especially in regards to the ongoing chatter by your opponents in matches such as calling each other to watch an attacker, complimenting a particular move that a player pulled off or just trash talking your play. This aspect really stood out as you can hear this type of dialogue in a lot of real life matches in recreational to professional leagues, whether it is soccer, hockey or basketball.

Overall, FIFA Street lives up to EA Sports promise of being the most realistic and authentic street soccer game released to date. With authentic teams, all-star players, realistic venues, slick looking visuals, great sound and intuitive controls, FIFA Street for the PS3 is a pretty good darn game.  This being said, there is a learning curve and I question whether this game is accessible enough for all.  There are some annoyances you will have to get past and those new to the series may find the controls a tad too complex.  Regardless, if you are a soccer fan with an itch for a soccer game that does not take itself too seriously then FIFA Street is right up your alley.