The games afoot (I’m already sorry) in Sherlock Holmes: Crimes and Punishments, the newest installment in the ever expanding The Adventures of Sherlock Holmes series has you become the world’s greatest detective and solve some pretty intricate mysteries that range from murder, theft, disappearances and more murder.

The game comprises of you solving a series of mysteries by collecting clues, evidence and interrogating suspects in order to deduce your way into solving the case. You have to solve each mystery before moving on to the next and how long each mystery takes is completely dependent on how adept you are at finding clues littered across each area. Helping you find these clues are Sherlock’s incredible skills as you use them to dig up things that would otherwise be overlooked.

When talking to people involved in the cases, or sometimes looking at corpses, you can scan their appearances to discover things about them that lead to you being able to weasel more information out of them whether verbal or not (cause of the corpses, see). You also have access to your ‘Sherlock Vision’, a mode that allows you to see things that other people would normally miss, such as screws hidden in the dirt at a railway station or marks on the ground from items being dragged. You also have access to the only occasionally helpful ‘Imagination Vision’, another mode which lets you envision things in order to put clues together. 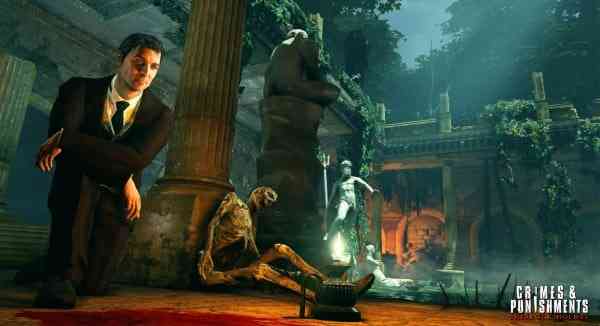 The game, if you didn’t deduce (again, I’m sorry) by the title, uses the book ‘Crime and Punishment’ as a base model for you to solve the crime and make the moral choice to pass judgement from what you have gleaned from your investigation. You can pass judgement at several points along the way, but to get the clearest picture of what happened, you have to find all the clues available to make sure you have the right perpetrator. In addition to all that, there are some puzzles along the way to not only help you solve your cases but to mix up the gameplay as well.

This all comes together to give you a rather time consuming and in-depth investigative game that can be fun, if played as intended. Digging up clues is fine and all, but the best parts of the game come from piecing the clues together and making your conclusions based on what you’ve found. While making a conclusion, you can look at all the clues and each conclusion becomes represented by a neuron firing in Sherlock’s head. While some conclusions are simple (stabbing means knife!), others become a coin toss, forcing you to choose what the clues mean or which of the suspects is lying to you. In order to keep it all straight, you will be alerted if your choice doesn’t logically mesh with your other choices, which was very helpful in some of the longer cases. Ultimately, as you’ve made your conclusions and picked your choices, you come to your final conclusion and can solve your case. This leaves you with several options in each investigation and can leave you making the wrong choice, sentencing the wrong person for a crime they didn’t commit.

While the gameplay is fun and seems quite intricate, it actually comes off as very simplistic. Finding clues is quite linear as they tell exactly where to find everything and give you hints as to what skills will best help you uncover the clues. In addition to that, the puzzles are all rather complicated and are head scratchers, but after only a few seconds you can opt to simply skip through them and move onto the next one. You also don’t really need to spend any time listening to any of the conversations (which is the majority of the game) since, as I stated above, they tell you exactly where to go and when. Even choosing the guilty party is defanged as you can just as easily re-choose who you think is guilty before moving on, just in case you didn’t think they were really the perpetrator after watching the cutscene. So, while a lot of thought and effort was put into making an investigation as in-depth as possible, they also undid all of it by allowing you to opt out of everything. 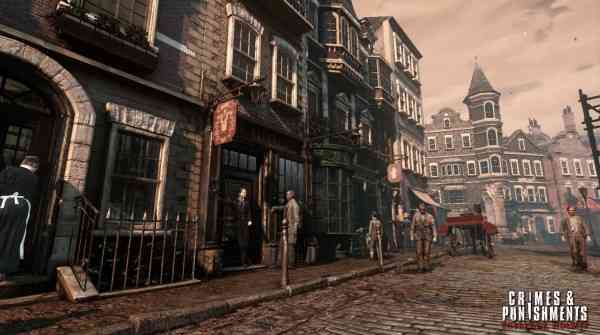 The graphics for the game are quite intricate as they have very carefully rendered Victorian-era London in quite stunning detail! Since the game really only requires you to move through environments and talk to characters, having sharp looking environments was a big plus to the game. The music also added to the game as it helped create atmosphere, tension and also helpfully letting you know when you had finally solved a puzzle (if you chose to actually do it). Unfortunately, you have to do a lot of travelling between these well rendered areas and the load times, while not overly lengthy, are frequent and take up almost as much time as the rest of the investigation will. As well, the controls did not go along well with such nice looking areas. Instead, they were clunky and irritating, especially when Watson came along for the ride as he constantly stood in front of you, forcing you to try to get around him in often tight spaces.

As far as investigation games go, Sherlock Holmes: Crimes and Punishments is a fair venture into the genre. Time consuming, in-depth and some well thought out mysteries make it a good investigation game that I did enjoy for lengths at a time. However, clunky controls, frequent and time consuming travels between areas and the ability to literally skip through all of the challenging sections are real setbacks to what could have otherwise been a very enjoyable game.