Skylanders Trap Team (Xbox One) Review – Trap Villains and Make them a Force for Good!

Skylanders is the franchise that started the “toys to life” genre.  Four years later the likes of Disney and Nintendo are producing figures that can be brought to life in their respective games.  Given that there is now more than one cowboy in town Skylanders has to keep being innovative to make it appealing.  Last year Skylanders SWAP Force added something new, and that game was great.  After playing it I was left wondering what they could do next to keep the series somewhat fresh.  Well, leave it to the Skylanders original dev-team Toys for Bob to think of something new.  Skylanders Trap Team is set to release for all consoles very soon.  I have been playing the Xbox One game with my kids (aged 10 and 8) over the past week and I am happy to say that we’ve been having a lot of fun, which is a good thing.

For those that have been living in the Stone Age, in Skylanders you place toy figures on a portal and they come to life in the game and on screen.  It is as simple as that.  Skylanders Trap Team keeps much of the same Skylanders formula as you are once again fighting evil and saving the world of Skylands.  This time you take on the role of the legendary Trap Masters who defeated the evil Doomraiders a long time ago.  Kaos is back yet again, as he breaks the Doomraiders out of Cloudcracker Prison in order to gain their assistance.  Kaos believes that these villains will help him to pull off his evil plan; however, they want nothing to do with him as they have their own agenda.  So, as a Portal Master, it’s up to you to “wrangle” in these villains, and other enemies, with the traps at your disposal. 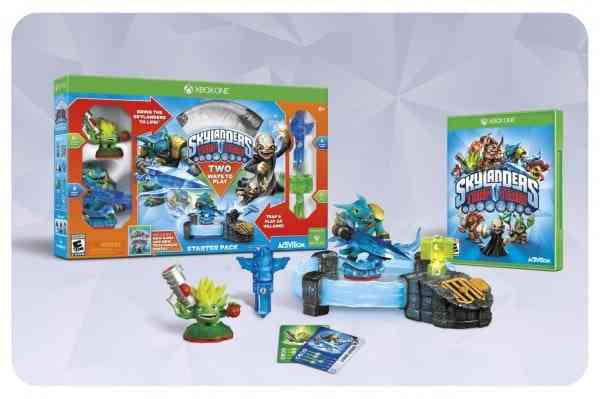 Trap Team comes packaged with a new portal that allows you to use traps to capture certain enemies in the game.  This is the new ‘twist’ to Skylanders.  During certain sequences you are able to trap enemies into a “Traptanium Trap” and once you do they become good and join your stable of playable characters.  What is neat about this is that you only need to have the trap in the portal and you can tag between the Skylander you are using and the enemy in the trap with the press of a button.  This enemy has a timer and once depleted you’re back to your Skylander.  Capturing any one of the villains is part of Trap Team’s magic.  You can actually hear them get captured on screen and transport from the TV to the portal in front of you where they spout off about their predicament.  It’s pretty neat and my kids were quite enamored by it.

On a side note, all Skylanders figures are compatible with Trap Team, so families that have been collecting the figures from the original Spyro’s Adventure and beyond, you can play with those characters in Trap Team.  The new Trap Team figures (e.g. Trap Masters and any new Trap Team specific characters) however are not backwards combatable, so they won’t work in previous games.  With the ability to play older characters and the new characters there are well over 200 figurines to choose from.

When playing Trap Team it is up to you to make the game what it is.  Sure, you can power through the levels going from start to finish without doing anything else, but where is the fun in that?  Along with the new ‘trapping’ feature, the draw of Trap Team comes from searching for hidden items and looking around all the levels for new areas to explore.  As with past games you are rewarded for your thoroughness.  You’ll get one star for completing each level’s main mission, but you’ll get two more stars depending on what else you do.  From finding all the hidden chests that give you money, to the hidden hats, story scrolls, trinkets, winged sapphires to special items and soul gems in each level, there is a lot to do.  Of course to experience everything, and find everything, you’ll need at least one Trap Master and one Trap of each element, and that can add up a bit, but remember, it’s not necessary to buy them right off the hop to enjoy the game. 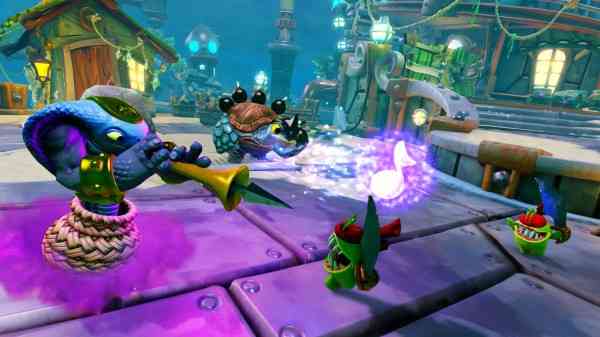 There are other things to do as well.  You’ll find Skystone Smash, a simple but yet addictive card game with strategy elements to it.  These can be found by finding certain characters in the levels or you can play it as a stand alone game from the menu.  There are also mini-games within some levels.  You can play games akin to Angry Birds to games that are Rhythm Based, kind of like Guitar Hero but with your controller.  My kids really enjoyed these mini-games as they added a break in the regular level exploration and they were fun.

Of course this wouldn’t be a Skylanders game without the Arena mode.  Here you enter one of 10 arenas and take on four separate challenges.  The first three have special things that happen during the match (e.g. hold the football and you or the enemy becomes bigger) while the final challenge is a mix of what you previously played.   Arena mode is always a nice change of pace and this time is no exception.

New to Skylanders it the Kaos Doom Challenge.  Originally a combat simulator for training at Skylander Academy (your new in-game hub), Kaos took it over for himself, hence the name.  This is basically a simplified tower defence game mixed with the action combat of Skylanders.  It eases you into it and gets progressively harder as you make the way through each level.   These challenges last from 3 to 14 stages in each level.  My 8-year-old son, who plays Clash of Clans, loved this aspect of the game as it was new and challenged him.   It’s a neat addition and is something that will keep those who play even busier. 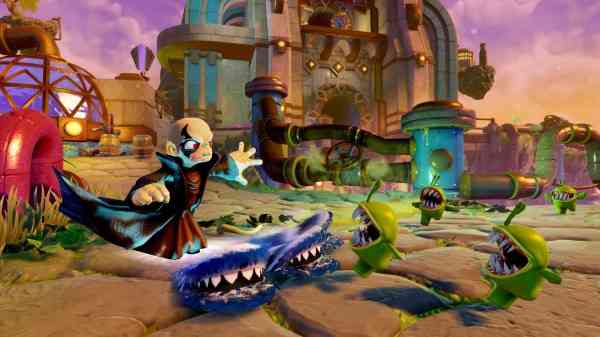 Portal master rank makes it return.  The stars you collect through the story mode, arena mode, and the new Kaos Doom Challenge all add up to raising your portal master ranking.  There are a total of 180 stars for you to earn, the majority of them to be earned in the story mode.  Completionists be forewarned, it will take awhile.

For those wondering about the skill level needed to play this game, a child with no skill can play while a bigger kid, or adult, can find some challenge too.  The multiple skill levels in the game tailor Trap Team for a wide range of people.  My 10-year-old daughter is not a videogame master, so she played it on easy.  Watching her play and have fun was rewarding.  She got into the story, enjoyed trapping enemies, and really had fun.  She didn’t want to stop playing.  Anyone of any gaming level can play and experience everything about it, and at the end of the day that really does count for a lot.

If there are two things that always astonishes me about any Skylanders game it is the creativity that goes into it and how they don’t rely on licensed characters, and Trap Team carries on this heritage.  The new Trap Master characters are great.  As in past games they are detailed and it’s hard to believe that they are a figure you use to play a videogame with.  How they come up with such original characters is beyond me.  And the new Skylander minis are as cute as can be.  If you have any Skylanders Sidekicks from previous versions, these are essentially the minis, and they are playable now, not just a mascot to follow you around.  The first time you hear “Eye Small’s” high pitched voice as he is placed on the portal, and you see him run around like a very small creature, you’ll chuckle and this is the same for all other minis. 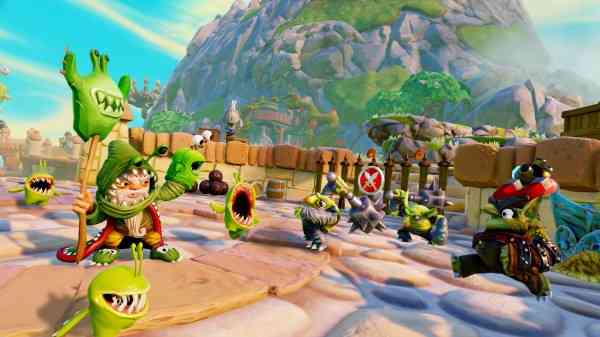 Visually the Xbox One version is a looker.  The colours are extremely bright and vibrant and the game just seems to pop off the screen.   Levels can be seen going way into the distance, which adds that feeling of being “in the game”.  I really think that Beenox, who handled the next-gen versions of Trap Team, have done a great job.  Many of the cut-scenes are seamless with gameplay and this makes it more like an interactive computer animated movie.  Level design falls along the same lines as the characters as it is fabulous and original.  One level that sticks in my head is Time Town.  It’s a level made of clocks and clock parts and each time you advance though a specific area parts of it transform in front of you.  If I have anything negative to say, and it’s small to say the least, it is that during some cut-scenes, or times you advance to new parts of a level via a super jump pad, you may see the odd texture pop-in, but this wasn’t too evident and doesn’t hamper the game at all.

In regards to the audio, the music was a highlight.  It changes tempo and volume depending on what you are doing.  The way it blends in with the level is amazing and if you listen closely you can hear how it is in sync with things happening in the level.  The noises in the levels actually make up part of the music in some ways.  You’ll even notice that when you switch to a villain to use they have their own music too.  Voice acting is great and there is a lot of it.  Voice actors of past main characters make a return to the game and there is a new character or two as well.  Something that people will find cute is that the enemy trapped in the portal has lots of dialog, so as you play they chime in and it’s very context specific.  Finally, sound effects make the levels and battles come alive, from waterfalls or rivers, wind, and other environmental effects to specific surfaces you run on and each character’s weapons.

At the end of the day Skylanders Trap Team is a great game for families to play, no matter what age.  Parents can sit with children, or siblings can sit side by side, and everyone will have fun.  With great character and level design, and so much to do, there is more then enough to keep anyone busy.  The new trapping of enemies adds a more immersion to an already busy game.  Those returning to Skylands can feel comfortable that this a great next chapter, and those new to the franchise will play a game that will definitely entertain. 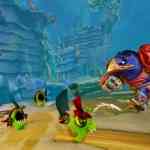 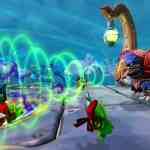 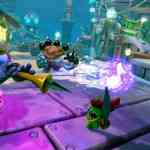 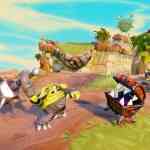 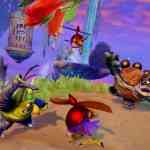 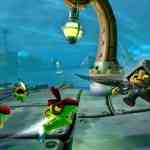 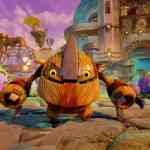 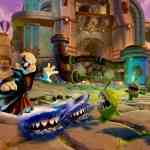 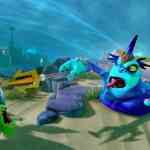 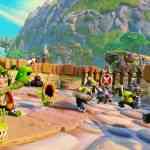 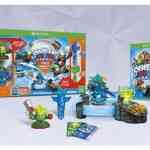 Next Sherlock Holmes: Crimes and Punishments (PS4) Review – Who Needs Sherlock, Scooby Doo Could Solve These Mysteries
Previous Gauntlet (PC) Review – It’s Fun But it’s Not Your Childhood Memories Brought Back to Life