I wanted to like Disney Infinity: Marvel Super Heroes. I wanted to like it a lot. Two of the most recognizable and beloved brands for kids and comic book geeks alike crammed into one game. Unfortunately a rather repetitive and dry campaign kept me from liking it as much as I’d hoped. Here’s the thing; I am a 37 year old man and in fairness I have to accept this is a game for kids. I realized early in no matter how much I’d hoped for something just a bit more grown up that I wasn’t really the target demographic. I decided at this point that rather than spend a boatload of time playing through something I knew I’d quickly tire of to hand over the controller to the market share that Disney Infinity is truly going for, my 6 year old son. Even more unfortunate than me not liking Disney Infinity all that much was seeing him not really like it either. Now does this mean it’s horrible? No, not really at least, but there sure is a lot of wasted potential here.

Now to be fair the only thing being reviewed here is the Disney Infinity Marvel Super Heroes starter pack and apart from that there is a lot of other products you can buy to add in to the game. Included in the starter pack alongside the game and portal is the Avengers play set with three characters (Iron Man, Thor, and Black Widow) as well as two Power Discs. Power Discs are used to either provide special abilities for your characters or they unlock texture packs and toys for the Toy Box feature of the game. All in all there are 84 new Power Discs to be collected for Infinity 2.0 which represents a huge investment on the part of the collector. Seeing as they’re sold in blind packs of two for around five bucks it’s entirely possible you’ll get a lot of doubles much like you would if you collected baseball cards. First and foremost this seems like a silly thing to do. I understand the rush of getting a rare disc out of a blind pack but we’re talking about a hobby that already requires a significant investment and needlessly adding seconds of something you don’t need is a waste of money. Picking up one of the other characters or play sets represents a much better use of your cash as you know what you’re getting. I’d be remiss not mention how awesomely realized the characters are too. A great attention to detail and highly stylized they’re sure to fire up the collector in nearly everyone who sees them. 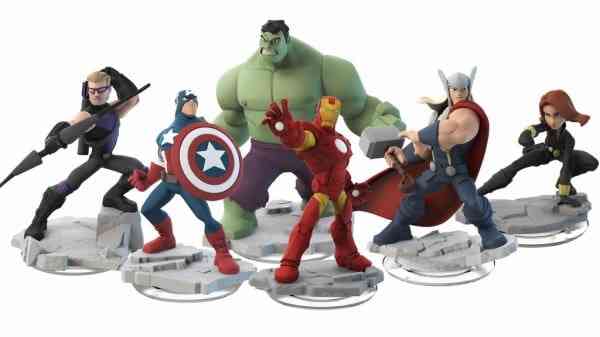 The Avengers play set itself drops you into a modified New York City and as mentioned before ends up being a grinding type experience to get through. Missions are repetitive consisting of ‘kill this’, ‘save that’, ‘fix this’ and so on. Even my kid noticed saying things like “Didn’t I already do this Dad?” You sure did kiddo! Switching up characters can keep things fresh with different attacks and different skill trees but it only does so much to combat the rather pedestrian gameplay on offer. Oh look… ANOTHER Frost Giant to beat up, HOORAY. Opening up new attacks and abilities for your three included characters is fun though, it’s just the grinding feeling you’ll have while getting there is hard to overcome. If anything you’ll find yourself ripping the city apart if only to collect blue sparks which are the game’s currency. You’ll use them to purchase toys and other items for the Toy Box which is the one portion of the game where Infinity 2.0 shines bright… more on that in a bit.

The two Power Discs included in the starter pack are ‘Escape from the Kyln’ and ‘Assault on Asgard’ both providing something different from the monotony of the play set experience. The Guardians of the Galaxy themed ‘Escape’ disc is kind of like a top down shooter whereas ‘Assault’ is a tower defense style game. What these represent is what’s available for the patient folks in the Toy Box which is essentially an in-depth game builder of its own allowing the maker to produce similar experiences themselves.

So now we’re here, the Toy Box. Without a doubt this feature is Disney Infinity 2.0’s crowning achievement. While it’s easy to pick up allowing players to make simple races and other games it takes a lot to master. Using the tools included, such as the brush for example, which has the game procedurally generate parts of your level in the theme of your choice is simple to do. You can drop in AI builders too that set to creating items from whatever world they represent. Of course if you want to get in depth and mould everything together just so you can do that too. Even if you’re not the overly creative type you’re able to download levels created by other users to enhance your experience. When you factor that in you’ll quickly realize that the possibilities are in fact quite endless. All in all the Toy Box in Infinity 2.0 is a vast step forward from its predecessor. The ease of use and world building assists make for a much more enjoyable time spent. 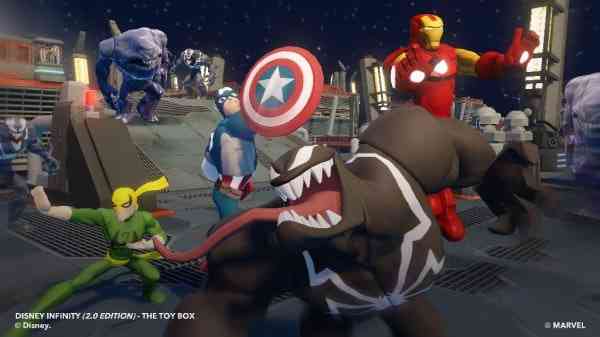 One very noticeable downfall when firing up Disney Infinity Marvel Super Heroes is what many would consider extremely subpar graphics for the new generation of consoles. Whether or not this is due to trying to accommodate the previous generation of consoles it is disappointing to have a powerful machine push blocky characters and buildings along with drab and even blockier environments. When you take a look at their main competition in the Skylanders series it’s like night and day with a huge edge being handed over to the ‘Toys for Bob’ franchise. However, graphics don’t always make the game so despite it being disappointing it’s obviously not game breaking. When I mentioned wasted potential this was definitely in the forefront of my mind. It really looks as if they could have accomplished so much better.

Looking forward to other sets and characters it’s easy to see that there is room to expand your game playing experience. Of course this comes at a fairly significant cost too. When you’re getting into the ‘toys-to-life’ genre though it is to be expected mind you. More heroes are on the way and play sets like Guardians of the Galaxy are also available. While GotG will be fun for a short sprint it will also quickly fall into that repetitive feeling but as stated earlier the play sets are just a side dish to the main course of the Toy Box. Let’s not forget that with Disney owning the rights to other franchises, like Star Wars for example, it is entirely possible we’ll see them creep into the game at some point… or at the very least in Disney Infinity 3.0. That is certainly something to look forward to!

Disney Infinity Marvel Super Heroes is certainly a fun way to sit around and play with your kids but I don’t see many adults or more mature gamers getting as much out of it unless they really enjoy the creationary aspects of the Toy Box. While the Toy Box might shine as the best experience that the game has to offer it’s unfortunately dulled by how disappointing the play sets are in comparison. The fact is that most players will just want to hop in and play rather than build. Those players will ultimately be left wanting after play set boredom sinks in. Still, it is an improvement over 1.0 and it makes me hopeful for what we might see out of the eventual successor in Disney Infinity 3.0.

Next Fenix Rage (PC) Review – Doomed to be Compared to Super Meat Boy this Game Stands Well On its Own
Previous Sherlock Holmes: Crimes and Punishments (PS4) Review – Who Needs Sherlock, Scooby Doo Could Solve These Mysteries