The Kickstarter campaign to make a fourth game in the Shantae series was successful, and WayForward has decided to shake things up a bit. This is the same Shantae you know and love, but with a gorgeous new visual style, a shakeup in the villain department, and multiple playable characters. If you’re a fan of 2D platformers with towns, NPCs, and Zelda-style item/ability collection, then this gem is for you.

Shantae: Half-Genie Hero has the player familiarly starting by leaving her house, and heading across the long dock into Scuttle Town, except, instead of a level right away, the player finds a trapdoor worth investigating. A mysterious light tells Shantae that there is an impending danger coming that threatens her world, and the genie world. Then the player gets to explore Scuttle town, and finally players find themselves in the familiar series intro of Shante battling pirates and dodging cannonballs across a near-endless dock.

“Shantae: Half-Genie Hero has a fantastic sense of humor and swag.”

This classic series beginning is the worst part of the Shantae series, and the worst part of Shantae: Half-Genie Hero. All Shantae can do is jump and hit with her hair, and the game is fairly immediately unforgiving. But, as the game progresses, players will find a rich RPG-lite platformer, which most fans of the genre should really enjoy. Players just need to give Shantae some time to expand beyond its basics. My emotions went “This game’s gorgeous and going to be great!” “Aw crap, this is boring.” “Oh, hold on…” “Oh this is awesome!” It doesn’t have any Ducktales bounce, Megaman level choice, or Metroid open world to help it stand out initially, but sooner rather than later you’ll be buying, and finding new abilities everywhere.

Shantae: Half-Genie Hero has a fantastic sense of humor and swag. For example, pirate villain Risky Boots first appears on the dopest three-eyed snail pirate ship ever, which she refers to as her “Part Omni-Organic, Partially Titanic, Ocean-Optional Tinkerslug, which Shantae refers to as “P.O.O.P. T.O.O.T.”. And when the boss battle against the slug starts, the pre-battle screen says “Tinkerslug (don’t call it Poop Toot)”. And as soon as that went away, Shantae shouted “Destroy Poop Toot!”. Needless to say I had to pause to wipe the tears out of my eyes before I could continue playing. 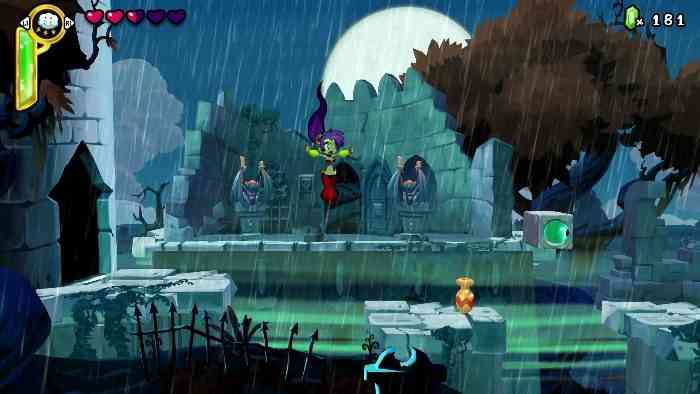 Players can choose between several characters other than Shantae. Although the half-genie hero is the only choice in the beginning, the others, when unlocked, have unique stories and play-styles. Each character’s completion percentage and time are also tracked, which provides lots of reasons to keep playing, if you’re the kind of person who plays Super Mario Bros. for the points, and not just the adventure.

The Super Nintendo-style pixel graphics are gone, in favor of a slick-looking 2.5D painted anime visual aesthetic, and it looks great. I personally love and prefer the 16-bit look of the last two Shantae games, but this one’s so gorgeous that this is just me talking personal preference. 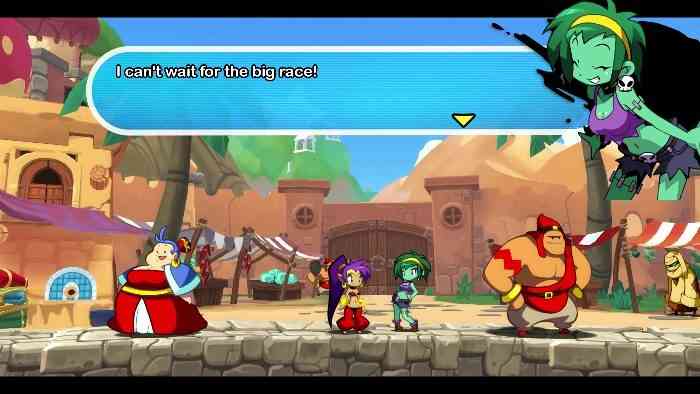 The music is an interesting blend of SNES/ Genesis era melodies, generic electronic music, electric guitar, and Arabian vibes. Overall it definitely hits more than misses, and I give it credit for trying to create memorable level melodies.

Shantae: Half Genie Hero is great. It’s a long game, and the more you play, the more you unlock, so you get tons of value for your dollar. Longtime series fans will be happy, and those new to the series can definitely start here. My only complaint is that it takes a bit to get going, but really, it’s just one level. Once you reach the first boss, it’s smooth sailing from then on. Highly recommended for fans of combinations of the words “platform”, “RPG”, “action”, “adventure”, and “Metroidvania”. 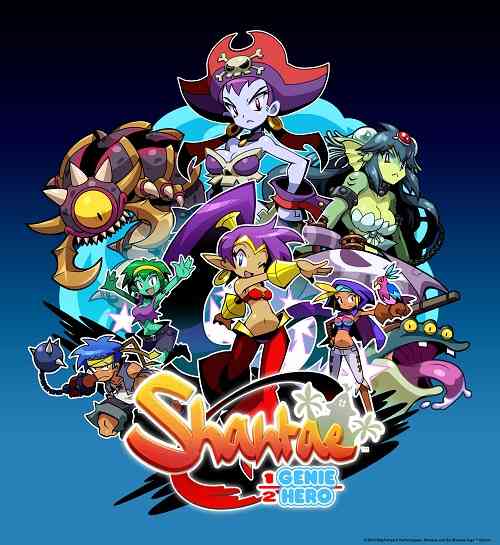