Playing Samorost 3 is like paging through a children’s storybook, one with many movable parts and the most beautiful of illustrations, but this story can also dance and bloom and challenge you — all without words. In the latest adventure of the white-capped “Gnome”, Amanita Design brings forward another brilliant point and click adventure game that comes to life under the player’s touch.

Without words, everything is inferred in Samorost 3, from the story to the controls, the puzzles and their solutions. You are Gnome, and you find a trumpet in the grass of a strange planet that is, of course, your home. You look through a telescope and see a landmass far away, then go and play a song to what appears to be a giant onion. Before you realize it, you find yourself gathering parts to build a spaceship. However, Samorost 3 is far more about found magical moments than an enthralling plot, in hopes that the player will take their time to explore this lovingly-crafted game rather than run straight through it. This is a peaceful and relaxing game, with no dying, but a lot of dancing.

“Playing Samorost 3 is like paging through a children’s storybook, one with many movable parts and the most beautiful of illustrations, but this story can also dance and bloom and challenge you — all without words.”

The clues in this puzzle game appear as vibrant spirits, and are so seamlessly integrated into the game that it should be considered the other way around. Gnome runs about, toots out a ditty to a plant and the spirit that comes out tells you a picture story that happens to guide you in the right direction. There is the sense that the environment of the game is helping you; there are no quest markers, there is no floating text telling you to push this button or that, and you are absorbed into Samorost’s world.

This is a game about observation and interpretation, patience and persistence. The puzzles are not too difficult, but require some thinking outside the box and a lot of inference. For example, early in the game, Gnome encounters a rickety moving platform suspended over a canyon. You automatically think to jump onto the platform and to go to the other side, but Gnome is too short. Despite everything games have taught you, Samorost 3 gives you the option to break the contraption and make a sturdy bridge. 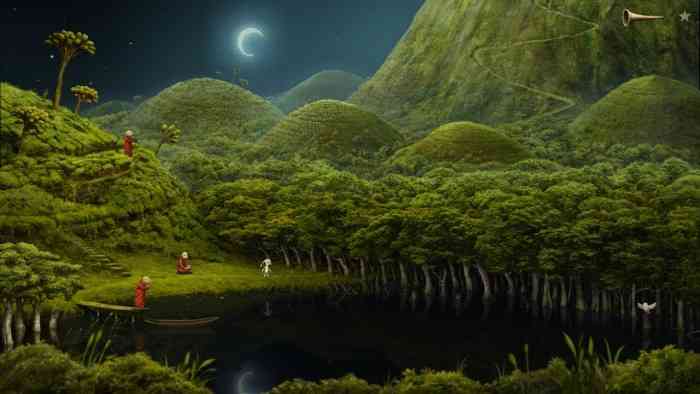 Persistence is key, as often the first try won’t do it in puzzles. You have to keep trying, sometimes bending something just far enough, other times realistically weakening a structure until it forms the bridge you need to solve a puzzle. This is a touch of realism in a fantastic world, providing something fresh to this uncomplicated puzzle adventure game. This kind of interaction with the environment once again counters the old video game logic that if it doesn’t work the first time (or on the typical third time), the solution must be something else. It can lead to some exasperation, however, as you try everything but the answer does not make itself immediately apparent.

While this is a simple point and click game, the controls are so easy to pick up it is intuitive. The world reacts in unexpected ways, so you are encouraged to take your time, click in sequences, or just click everywhere just to see how the game will respond. Getting Gnome to play the trumpet can be finicky at times, as I found I had to select exactly the right spot to get him to play it. The menu without any text fits the game’s aesthetic, but it was confusing at first, as what I thought was the exit menu button turned out to be the exit game button. Thankfully, Samorost 3 saves exactly where you were when you left off.

“Samorost 3 is surreal, magical, and one of the warmest and most delightful games I’ve had the pleasure of playing.”

Visually, the game is exceptional, all exquisite organic landscapes against the terrific expanse of space. Samorost 3 features strange and wonderfully weird characters, each marvellously animated. Its worlds are completely alive, though small in scale, its celestial landmasses bringing to mind the tiny, fantastical planets of The Little Prince. Each frame of Samorost 3 could be a page out of a picture book, but the game makes do with simplicity as well. My favourite puzzle featured pictures of stick figures doing different actions on cards, which had to be ordered and re-ordered to animate different sequences of events. It was a delight to shuffle the cards and see the scenarios play out (as even the incorrect ones provided clues) and it was unlike any puzzle I have ever seen.

The sound of Samorost 3 changes depending on where Gnome is at the time. The game features minimal voice acting in no particular language, only enough to convey an emotion. Its music is mostly lovely ambient noise, just so that space loses its silence — unless it is time to dance. The occasions in the game where its music becomes melodic and purposeful are the most joyous. An outstanding moment for sound was an impromptu performance of choral singing by termites. It was a moment that was not needed to continue the game and very easy to miss, but it was one of the most beautiful.

Samorost 3 is one of those games that gives back to you as much as you give it. The time and effort you spend here is rewarded in turn, with every wondrous discovery and all the little joys the game has to offer. Samorost 3 is surreal, magical, and one of the warmest and most delightful games I’ve had the pleasure of playing.


Lost In Play Bringing the Nostalgia This Summer