I love bullet hells. Walking around arcades as a kid, those long scrolling screens would just jump out at me and scream “PLAY ME” with their flashing lights and projectiles going absolutely everywhere. Once I found a really good cabinet I wouldn’t leave until I ran out of quarters or tokens, often asking nearby friends to go exchange another five or ten dollar bill for me instead of accepting defeat. Luckily these days, you can play a lot of classics or new iterations of such a long-lived genre from the comfort of your own home, and continues don’t cost a penny past what you’ve already paid. It’s a really good thing, because Deathsmiles would have me emptying my pockets and running to the ATM if I were playing it over twenty years ago.

You start out choosing one of five angels – although one definitely looks much more like a witch – and then blast your way through the short campaign. Each girl has a slow/strong attack, a fast/light attack, a bomb ability, and a familiar who follows and helps you shoot anything in sight. They’re all somewhat different and are themed by elements, but the core concept remains the same: dodge everything, shoot everything, and collect orbs.

“Deathsmiles would have me emptying my pockets and running to the ATM if I were playing it over twenty years ago [in the arcade].”

There’s one variation that isn’t standard to every bullet hell – the ability to fire at enemies both in front of and behind you. This not only adds some interesting gameplay to the typical “move forward and shoot stuff in front of you” by having enemies spawn from behind, but there are several levels that focus on moving up or down and defending yourself from all sides. It’s not really new, but I love when this feature is implemented because it can really force you into tight situations that require using a bomb or getting hit. As long as there are a couple of limited ways out, being painted into a corner isn’t a bad or frustrating thing, it simply adds a great level of tension and desperation.

Deathsmiles doesn’t have upgrades that drop and change your primary fire, but there is a super system that you can initiate once you’ve collected enough orbs. Coupled with bombs, this gives you at least two ways to basically clear the screen and be invincible for just a moment. While I’m personally a much bigger fan of droppable upgrades, using your super does still feel amazing. CAVE certainly knows what they’re doing when it comes to bullet hells, so it’s no surprise that not only the controls but all of the primary mechanics feel good and balanced. 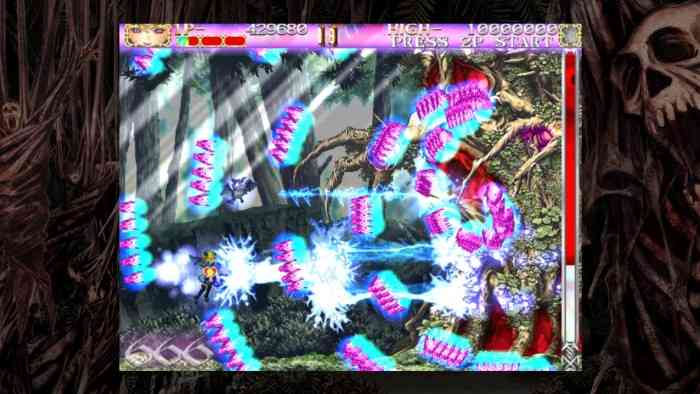 While it all feels great, there are still a few areas where some major points are lost. For instance, I can’t stand full screen not really being full screen. Maybe I missed something in the options, but I couldn’t seem to get rid of the borders entirely which drove me nuts. It does give a bit of a nostalgic vibe but I’d really just prefer a normal aspect ratio that uses all screen space. Another problem is in the value and play time; unless you’re constantly restarting to try to get perfect runs and top scores, you can easily zip through the campaign with one angel in less than half an hour. Multiply that by five angels and you’re looking at around twenty dollars for two and a half hours of entertainment. There are a couple of other modes like score attack, but they didn’t really draw me in.  You can play with others via local co-op which is always welcome, but considering this review is for the Steam release, that’s really not that big of a deal when there are so many other co-op indie shooters to choose from.

“…you’re not always trying to kill everything on screen, you’re trying to make damn well sure you don’t ever get hit.”

The final nail in the coffin that stops Deathsmiles from really breaking out, at least in my opinion, is the theme and art style. I personally enjoy it, but I know there are a lot of people out there who are instantly turned off by the whole young girl anime angel vibe. It’s absolutely just personal preference, and I really hope any bullet hell fans that don’t typically enjoy this art style can just move past it. The gameplay itself is great, and deserves at the very least to not be instantly dismissed because of it.

If you want a classic arcade experience without leaving your house, then pick up Deathsmiles. It’s a bit pricey for what you get, but I think most fans of the genre will enjoy it quite a bit if given the chance. Just remember, for anyone out there who isn’t used to bullet hells and wants to give it a shot, you’re not always trying to kill everything on screen, you’re trying to make damn well sure you don’t ever get hit. 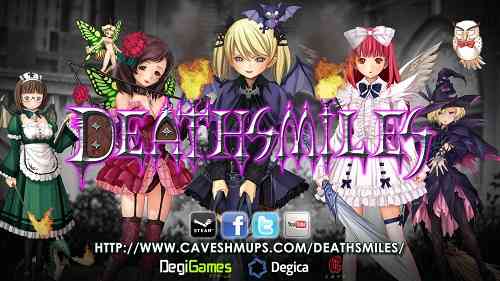