The Saints Row franchise isn’t exactly the king of open world sandbox styles games but there is no question Volition’s power house of a franchise knows what it takes to deliver a “WTF am I playing” thrill ride of an experience. It’s that wacky, over the top and nonsensical gameplay that has been the secret to Saints Row’s success. Saints Row: Gat Out of Hell continues in the same vein, playing out very much like Saints Row 4 but with a few new wrinkles added to the mix. It’s a stand-alone expansion so there is no need for you to play Saints Row 4 in order to jump into this digital download game. From beginning to end, it doesn’t take long to finish Gat Out of Hell. In fact, it is almost a little too short and left me wanting more. That said, Gat Out of Hell isn’t a game Saints fans will regret playing, like at all.

What is most impressive is where the game takes place, Hell. Volition built the game from the ground up so the city has been completely re-imagined in a Hell sense. It doesn’t look like the city of Steelport from Saints Row 4 in any way and is about half the size. It is a dark world filled with flying demons, zombie-like characters trudging the streets, deranged creatures trying to run over you in any vehicle they can get their hands on, tiny ankle bitters and of course the big guy himself, the devil. For an expansion the city is wickedly enjoyable to explore and it is this exploration that gives the game some legs. Otherwise this Saints Row game felt more like a teaser to me. 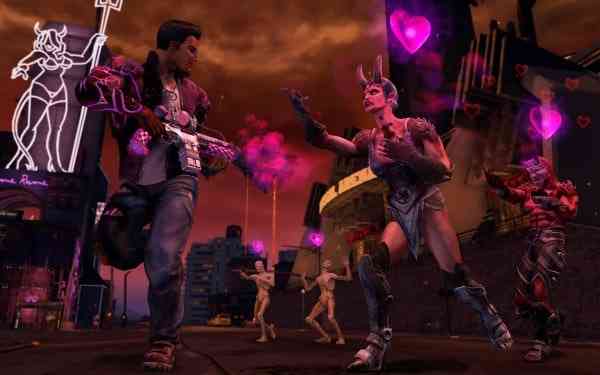 Story wise, Gat Out of Hell takes place shortly after the events of Saints Row 4. The Saints crew have gathered together aboard their ship celebrating when they decide to break out the Ouija board. During the Ouija game, the leader of the Saints finds himself mysteriously transported to Hell. It doesn’t take long for the Saints to figure out that the Devil is behind the kidnapping as he intends his daughter Jezebel to marry the Saints’ Boss. Following them via the Ouija board’s teleport powers, Johnny Gat and Kinzie Kensington head off into Hell to stop Satan and rescue the Boss.

It’s light, fluffy and nothing incredibly deep but the story lays enough of a foundation to go flying, yes FLYING, through Hell with your bad ass angel wings. Aside from the city itself, Gat’s angel wings are the single biggest innovation in the game. Many of your super powers from Saints Row 4 return but the new flying mechanic is clearly the focus of this expansion. Overall the mechanic is a welcome addition but yikes I needed a few flying lessons before I felt comfortable with it.

For starters, I had to jump into the menu right away to correct the inversion controls. Those who have played many flying games and are used to the inverted flight controls will have no issues. For flying noobs like myself, I found I was consistently fighting the controls during the first hour of flight time. What also makes the flying segments tricky is how you only have a limited amount of time and ‘flaps’ to glide around in the air. If you don’t use your momentum or glide, your stamina quickly evaporates and you will go plummeting to the ground. I had to learn this lesson the hard way several times. After a few flying quests and after I upgraded some of the flying powers I was well on my way. Eventually I had fun and flying felt smooth as I glided over the city of Hell. 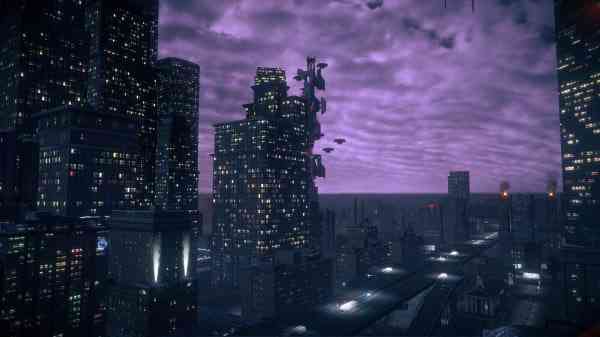 Aside from the flying mechanics, Gat Out of Hell plays and feels much like Saints Row 4. It is played as a third-person shooter in the open world city of Hell scattered with quests, secondary objectives, and various collectibles. You cannot customize your characters like you could in Saints Row 4 and aside from Gat, Kenzie and the President, many of the Saints characters are left of the experience (with the exception of a few cut-scenes). Familiar things like accessing your weapon wheel is accomplished by holding down the B button and selecting some of your powers like the Stomp Blast is done with the D pad. It is all very familiar but it’s not a bad thing as being able to leap tall buildings and cliffs, and super sprinting down a 4-lane highway to hell (see what I did there) is a blast. The upgrades feel significant and the system of earning cash to upgrade your various powers gives the game plenty of replay value.

Unlike the progression system in previous Saints games, you advance through the story by completing activities to fill a “Satan’s Wrath” meter. When this meter hits a certain point it unlocks cutscenes and further story elements. There are five main areas in the game: Shantytown, Barrens, Downtown, Forge, and the Den. All of these surround a central tower where the big guy himself inhabits. Each area has a variety of activities and historical characters you will encounter. There are similarities with Saints Row 4 but there is enough of a difference to make them feel new.

Likewise, there are some new weapons added to the mix. There is a weapon that fires a rain of deadly demon eating frogs. There is also another weapon called the Exodus that fires a steam of insects. There is some variety when it comes to the enemies as well including “Bro Demons” who run around like college frat boys. Bottom line, the weapons and enemies only add to the personality and enjoyment of the game. 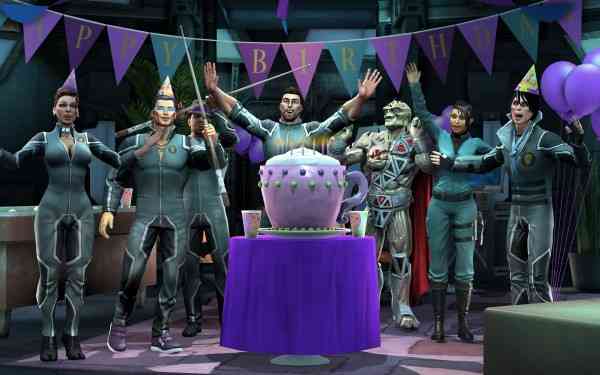 For an expansion there is a glut of side quests, finding collectibles (clusters and audio logs) and other bonus missions. There is a currency system to upgrade your weapons and an XP system which lends itself to upgrading your super powers. You cannot call in your homies like you can in Saints 4 but the addition of an online coop mode is a pleasant surprise.

The visuals aren’t exactly a next gen masterpiece but they do stay true to the Saints Row brand and the world as I mentioned is impressive. I did experience some slow-downs from time to time when the action became a little frantic on screen and I noticed some wonky camera issues here and there; otherwise, Gat Out of Hell is a reasonably smooth experience. The audio however is solid. The musical sequences are hilarious and the voice work, including Jay Mohr who plays Dane, is fantastic. Other in game sound effects are spot-on.

Saints Row 4 fans have been waiting for this expansion to finally touch down for quite some time now and by and large the wait was worth it. The reimagined Saints Row version of Hell built from the ground up is impressive and much of the personality we have come to love about the franchise is prominently on display. Granted the game can be offensive at times but it never takes itself too seriously and is all about entertaining. It will only take you a lazy Sunday afternoon to finish the main campaign elements but the amount of collectibles and items you can level up gives this expansion plenty of wheels. Saints Row fans rejoice as this is a solid purchase for $20 bucks.