Developed by Reikon Games and published by Devolver Digital, RUINER brings a violent, isometric twin-stick shooter to consoles and PC. When you mix brutal combat, anime inspiration, cyberpunk, and an awesome soundtrack, you get RUINER. We saw the game earlier this month at PAX West 2017, and as impressed as we were with the demo available at the time, we are even more impressed with this title in its entirety.

The narrative of RUINER is simple, but enough to get the ball rolling. You play as a wired sociopath who, under the guidance of a secretive hacker friend, seeks out those who tried to control him and have kidnapped his brother. Not much of the story is revealed to the player character, but the violent gameplay is obviously the focus of the game. While the narrative of RUINER is relatively self-contained, the city of Rengkok, as well as the world in general, is interesting and full of life. It’s a shame, however, that the various side characters and quests don’t contain more storylines to behold.

RUINER‘s greatest strength is in its gameplay and it is exceptional. The combat portions of the game make up most of the gameplay and feature twin-stick shooter action in a fast-paced, unforgiving environment. There are a few sidequests and such, though they don’t make up a significant part of the game. In combat, the player is equipped with both ranged and melee weapons, where ammunition (and durability for melee weapons) efficiency is vital. The difficulty of RUINER can be a challenge for those unfamiliar with the genre, but in a manner that is more consistent with deserved failures rather than overpowered bosses. 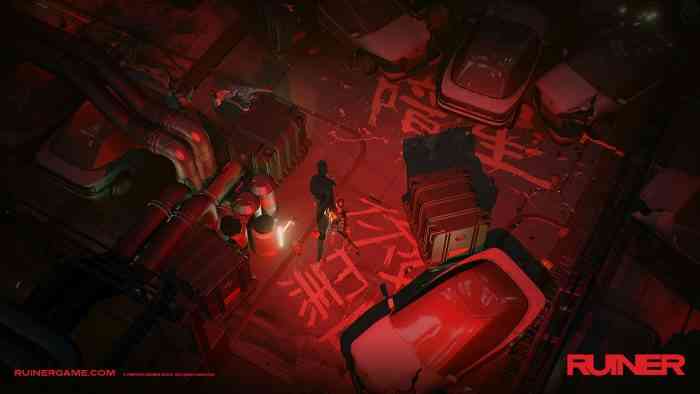 The combat itself is responsive and fast, with enemies of various abilities and tactics that always kept me on my toes. With a wide variety of futuristic weapons in addition to tried and true classics such as the shotgun, RUINER’s combat was nothing if not exciting and rewarding. In addition to weapons, special abilities kept the action fresh and players can choose how they play thanks to the skill tree system. The best part of the skill tree system is that players are free to re-spec their characters as they see fit, which comes in handy at tough portions of the game. As an aside, the game’s difficulty does waver a bit in that some bosses tend to be significantly easier than the mobs in areas preceding them, though it is not a big issue.

Visually, RUINER is a treat for cyberpunk fans. With the neon-filled, dusty city of Rengkok, players will definitely feel like they have entered an atypical cyberpunk world, though it may feel overly familiar. If there is one complaint I have in terms of the aesthetic of RUINER, is that there is an overabundance of black and red. The colors match the game perfectly, but the various other colors shown in areas such as Rengkok were impressive and vibrant, bringing those settings to life. In addition, the enemies, characters, and setting of RUINER all fit the overall aesthetic wonderfully. As for the game’s technical prowess, the game ran smoothly for me in all areas ranging from the city of Rengkok to the midst of battle.

“RUINER is a tight experience that transcends its inspirations and becomes an experience of its own.”

Audio in games is usually not a huge factor for me, however, RUINER’s soundtrack was electric and fit every scene and mood almost perfectly. Making my way through levels has never felt so badass than it did in RUINER thanks to the epic music accompanying me. Though the soundtrack and music were among my favorites, the game could have benefited greatly from some voice acting.

Overall, RUINER did exactly what it needed to do in order to be what it seems to set out to be; a violent, linear, gameplay focused narrative with a great soundtrack. While some aspects could have been included in the game, RUINER is a great game when viewed for what it is. With a focused narrative, crisp graphics, smooth responsive gameplay, and a heart-pounding soundtrack, RUINER is a tight experience that transcends its inspirations and becomes an experience of its own.