This Devolver Digital 2D platformer has a lot of chops! Developer Tomasz Waclawek has created a magnetic tribute to those old thinker arcade stand-ups. Sure, it has some similarities to other newer indie games, but the concept, design and gameplay are pretty unique. You might find yourself slinking through the first mission with relative ease, then as you grab a real handle on the controls, things become quite a lot more serious.

Movement and animation of your player is absolutely superb and although she’s kind of plain-looking, clad in her motorcycle helmet and leathers, it’s a whole lot of fun to move and jump, sneak and climb and of course, kill! She can move hand-over-hand across ceilings and throw her hook and line, mid-jump, to swing or ascend. She can scale up or slide down walls, smash through windows, quickly disappear in elevators or use stairwells to surprise her targets.

The backdrop is adequate for these very well designed rooms. The enemies’ graphic art gives them a nostalgic and stoic look that reminds me of the stuff straight out of the 8-bit days. There’s nothing fancy there, yet the images are hauntingly effective in personifying the various kinds of antagonists. The real action in this game comes into play during the turn-based engagement with your foes, where you are posed with some pulse altering decisions.

“The game may be turn-based, but you won’t notice any slowing of play thanks to the brilliant nature of engagement and the accompanying soundtrack, which plays a huge role in the experience.”

As you will discover, accumulating the extra skills gives you many more options and a much needed advantage when pitted against a room full of antagonists. The game may be turn-based, but you won’t notice any slowing of play thanks to the brilliant nature of engagement and the accompanying soundtrack, which plays a huge role in the experience.

Controller or Keyboard? Devolver Digital recommends using a game controller. After trying both for several hours, I totally agree. The mouse/keyboard is do-able but will definitely restrict your progress and possibly give you grief at the most integral moments. The game controller maintains smooth transitioning, reliability and a lot more options for using skills when you need them the most.

Ronin had me really thinking and fully involved. A great feature that I use often is the ability to scroll. You can scan through every room and observe everything on an entire level before you even begin or at any time during play, so it’s easy to see what you’ll be up against and plan your strategy. Don’t get me wrong – this is by no means an easy game and many gamers out there may find themselves giving up on it prematurely. Sometimes, you do actually have to work to claim the win and this is just one of those titles. 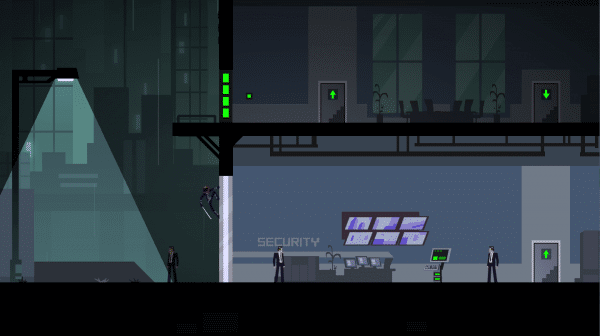 All great games come with a few shortcomings and downfalls. This one is not excluded from that camp. There are occasionally some complicated situations that will leave you frustrated with limited movement options during the turn-by-turn rallies. For instance, your rope won’t attach to the nearby substrates as it should, leaving you suspended in mid-air with nowhere to go but dead. I also ran into a few instances of being trapped in an area with no way to die and no way out. The nice thing is, you can always reload a checkpoint without having to replay the entire mission. Depending on how well you’ve played that mission, you may or may not want to start the whole thing over again.

The story behind this vendetta mission is a little vague. Although storyline is not integral to the gameplay itself, I would have enjoyed a little more backstory and dialogue to explain the motivations of the player character. Ronin by definition means “wave man” or “wandering man” and was later adopted to label samurai soldiers who had no master. I’m hoping that the girl on the motorcycle explains herself by the end of the game.

Ronin is an extremely challenging platformer with a hidden ton of entertaining hours within. Strategic, thoughtful missions coupled with really cool player maneuverability make it one of those games you can’t stop playing until you beat it. That said, I would like to see the developer introduce a level editor for those of us who want to build our own scenarios once we conquer the final boss.

***A PC code was provided by the publisher for review***