I’ve lost count at how many LEGO games are in the wild now, but you can add one more as LEGO Jurassic World has been out on store shelves since the movie launched June 12th.  LEGO games are a staple franchise, covering the likes of Star Wars, Indiana Jones, Batman, Marvel Superheroes, Harry Potter, The Hobbit, and Pirates of the Caribbean to name a few. TT Games seems to “Legoize” many different franchises, and the world of dinosaurs is their next entry.  Capitalizing not only on the recently released Jurassic World, they have included all the movies in the Jurassic Park series, including Jurassic Park, The Lost World: Jurassic Park, and Jurassic Park III.  So, how does a LEGO translation of all these movies fair?  Well we’ve battled a few dinos, navigated dense forests, crossed tropical waters, and dove into dino-dung to give you our thoughts.

There is no need to go over the gameplay of LEGO Jurassic World as it follows the standard LEGO formula.  For those living under a rock though, I can sum it up simply: solve puzzles, break LEGO items, rebuild them into something new, and traverse puzzle sections of the game to get from point A to point B.  The game does not stray far from what has made LEGO games what they are.  If there was one thing that was very noticeable though is that there is less combat than that found in previous LEGO games.  I found that LEGO Jurassic World is heavier on puzzle solving and telling the story of the movies than other games before it.  Sure, you’ll fight an enemy here and there, but there is much less combat than that found in LEGO games like Marvel Superheroes, Batman or any of the Star Wars games.

“If there was one thing that was very noticeable though is that there is less combat than that found in previous LEGO games.  I found that LEGO Jurassic World is heavier on puzzle solving and telling the story of the movies than other games before it.”

Each movie’s story plays out very well, highlighting key points in each narrative while keeping the gameplay moving along.  There is a lot of humour in this game, including how previous death scenes in the movies are handled.  For example, the pivotal scene in the original Jurassic Park where one of the characters is eaten by the T-Rex as he hides in the bathroom; in the game he does get eaten, but he is shown brushing the teeth of the T-Rex instead of being gruesomely swallowed.  It’s these humorous touches to key points of the movies that will keep you chuckling.

You’ll get through each chapter (movie) in about 2-3 hours, and this includes a little side hunting for some collectibles.  Multiply this by 4 and you have about 8 to 12 hours of initial gameplay.  I say initial as there is a whole lot of stuff to collect in order to 100% complete this game.  From all the characters and vehicles to the standard gold and red bricks, mini-kits, and of course dinosaurs.  You can also do other stuff too, such as saving workers in “peril”, or healing dinosaurs throughout the hub.  Jurassic Park and Jurassic World are already opened for gameplay, but you need to finish Jurassic Park to play through The Lost World then through Jurassic Park III. 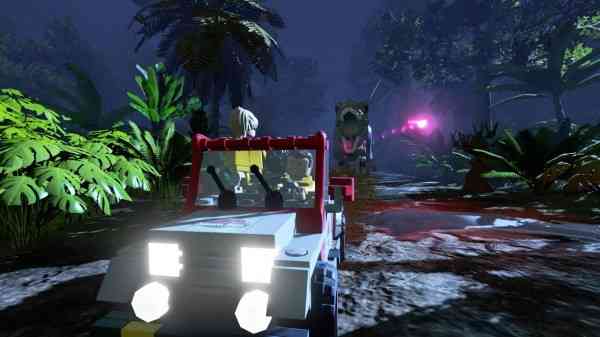 Part of the addictiveness is opening up as many characters as possible and coming back to each level to access areas you couldn’t before.  As much as I enjoyed this aspect I found something new that overshadowed it, and it was playing as some of the dinosaurs in the game.  You can play as some of the famed movies dinos as part of specific levels, but you can also hunt for amber stones and open up other dinosaurs for play later.  You’ll get to relive that famed scene from the original Jurassic Park movie where the T-Rex fights off a pack of Velociraptors in the park’s visitor center or take on the role of a Triceratops and help Ellie and one of her friends get back to safety as a storm hits the island.  Playing as a dino is fun, and adds a bit more to the game’s overall experience.

Being a father of two kids, one of the things that I was impressed with, and one that is not linked to gameplay, are the loading screens.  Yes, I said loading screens.  Here you’ll find Mr. DNA (from Jurassic Park and Jurassic World) pointing out that there is something to learn on screen.  Look closely and you’ll find facts about dinosaurs that kids can read and discover.  My son is in a “dino-phase” right now given the release of Jurassic World, and he was reading these facts out loud and finding some of them interesting.  Yes, it’s a small feature but something I appreciated.

Along with the good, I did find some frustration in the game.  First off is the in-game hub.  Although it looks pretty cool, it can be a ‘pain-in-the-butt’ to navigate.  There is no ease of use and you have to literally click on everything to see where you may end up, and even then it’s generally not where you want to go, and you’ll spend wasted time trying to get to one specific point.  Given that the target audience is kids, this will prove to be frustrating for them if they want to go back to specific areas on a regular basis.

“Sure, it doesn’t stray from the original formula brought forth from so many other LEGO games, but seeing the Jurassic Park franchise come to life in LEGO form is quite entertaining.”

The other complaint I have, which I have found in LEGO games as a whole since I started playing them, is the control and the invisible walls.  In regards to the control, it always feels floaty and is not nearly as accurate as it could be.  Sure, this complaint maybe part of the diehard gamer in me, but man, the way your character feels when jumping from a platform or across an obstacle just doesn’t feel right.  I missed my target or died more than a few times due to this.  It has been this way for so long though I feel that they just continue to use the same programming.   As for the invisible walls, I find that there could be so much more to explore, and then when I go over to an area that seems to be inviting me, BAM, I hit a wall and just run in place.  It can be a bit frustrating when you want to go somewhere in the level that seems part of the actual level, but you can’t.  Given that LEGO Dimensions is just around the corner, I don’t know if this issue will ever be rectified.

If there is one thing that I was really amazed at with LEGO Jurassic World, it is how TT Games have transformed the movie-based content into LEGO game content.  The visuals are pretty solid.  From the environments you traverse in, the vehicles you get to drive, to the dinosaurs that roam the land, it is pretty impressive.  There is ample use of lighting and special effects too, from the way light shines though the Velociraptor transport bin at the start of the game to the way water drops hit the camera as you run through a level during the rain.  I don’t think to many people will find a reason to complain here as the game runs pretty smooth and looks great on the current-gen consoles. 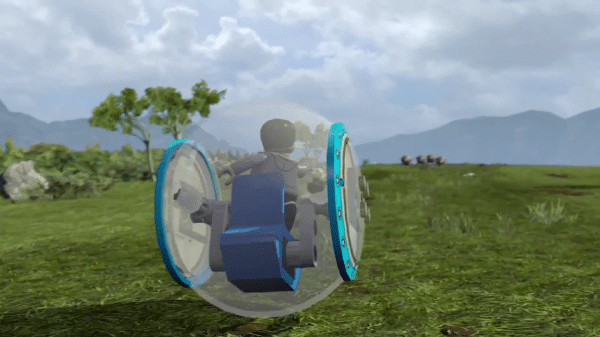 As for the sound, it is generally a positive experience.  TT Games uses audio right from the movies, but the first three movies sound levels seem to be hit or miss.  It’s almost as if some of the recording was poor quality at times.  Of course the fourth movie, Jurassic World, has no such difficulties given it is currently in theaters.  Regardless of any issues though, to hear Jeff Goldblum, Sam Neil, Richard Attenborough, Tea Leoni, William H. Macy and others from the original movies is a treat, and to hear the current actors such as Chris Pratt, Bryce Dallas Howard and B.D. Wong (who was in the first and current movie) is just as great.  As for the dinosaurs, they have their own sounds and manage to convey the feeling of the great beasts that once roared and rumbled across the land.  Once you hear the roar of a T-Rex or the thump of Triceratops as it walks across the ground, you’ll know what I mean.  Of course we can’t forget the music, as John Williams score is front and center and the music as whole adds to the game.

LEGO Jurassic World is a fairly solid game through and through.  Sure, it doesn’t stray from the original formula brought forth from so many other LEGO games, but seeing the Jurassic Park franchise come to life in LEGO form is quite entertaining.  There are some hiccups along the way, such as the in-game hub, control, and lack of openness in each level, but overall this game will be enjoyable for the whole family, from the younger gamers who may be seeing any of the Jurassic Park movies for the first time, to the older gamers who might be fans of the dinosaur franchise already, there is a lot to do and a lot to like here.

Next Ronin Review – Now We See Why This Game is Coming to the PS4
Previous Devil May Cry 4: Special Edition Review – Camera Issues Aside, It’s a Fun Hack & Slasher