Way back in 1975 there was a science fiction movie, that postulated a world run by corporations, where the major outlet for violence lay in a violently modified and deadly game of roller derby, called Rollerball. Aesthetically, Rollerdrome takes 1970s artistic inspiration from that movie and comic book artist Moebius from the Heavy Metal magazine. This gives the game a look and feel that makes it stand out from other games.

On the gameplay side, Rollerdrome takes the movement scheme from the Tony Hawk skateboard games and marries it with the gunplay mechanics of Max Payne. The end result is a uniquely new genre-crossing game. You will have your hands full trying to simultaneously pull off trick skating moves while battling enemies or trying to pick up tokens for skill and point boosts.

Game Developer, Roll7, has taken their experience from their own OlliOlli skateboard games to create this third-person skater shooter set in a retrofuture. The 2030 corporation-controlled world of Rollerdrome is very analog in nature. Even the mechs in the game use pilots instead of AI. There are no computers or any other digital devices to be found anywhere in the world of Rollerdrome.

Everything about the game screams 1970s from the 2D pencil artwork to the synthwave style of music. Musician Electric Dragon used analog synthesizers to create a soundtrack that is very warm and rich sounding. The music emphasizes the fast and frenetic pace of the game that keeps pushing you forward to play more. He affectionately calls it “music to kill by.”

What makes Rollerdrome so unique is the marriage of two unrelated gaming genres – roller skating and gunplay. You have to master not just skateboarding skills for movement but also for offensive and defensive attacks. Jumping, grinding, spinning and pulling tricks allows you to not only rack up points but also to reload weapons or unlock new weapons. Dodging not only avoids enemy fire but perfect dodges rack up extra points and breaks a sniper’s lock on you.

On the gunplay side, you have the ability to not only lock onto enemy targets but you can also employ Freeze Time– aka Bullet Time. With this you gain a much-needed advantage of slowing things down to allow you more time to dole out destruction. 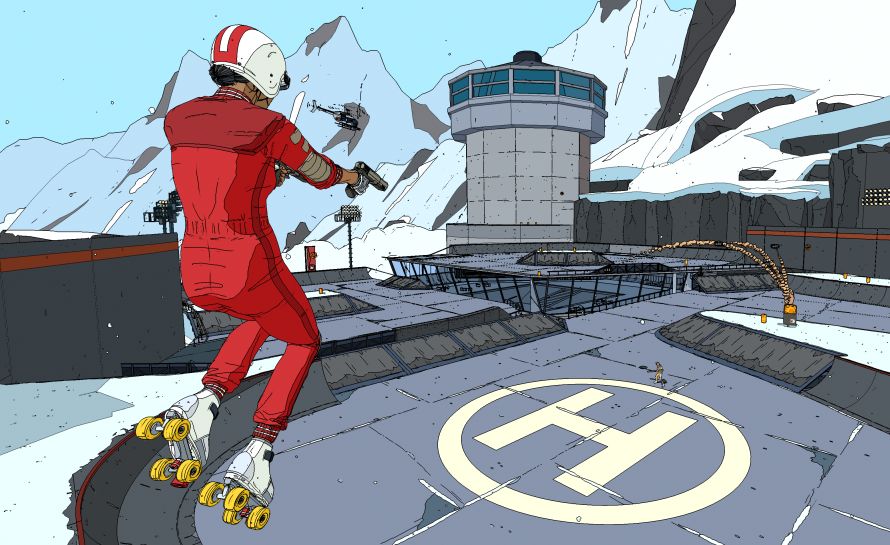 As you can infer, the mixing of these two gameplay styles makes for deep and challenging experience. The game starts off simple but quickly ramps up in difficulty. Fortunately, careful thought went into the level design. There is plenty of room to gain speed, with well-placed ramps for jumping or gaining access to new areas.

My major knock on the game would be the combination of the 2D comic book style against the gameplay. There is a lack of depth to the surroundings which makes judging aerial maneuvers difficult. This is important in maximizing your score in collecting tokens strewn throughout each level.

Along with the solid level design comes a good variety of enemy types. Some are melee weapon based, for which you can gain points by perfectly dodging their attacks before you dispatch. Other enemies are of the sniper variety who track you with laser sites. You constantly see the beams sweep around looking for you. When they find you and lock on the beams change from orange to red. Dodge time!

You play as rookie, Kara Hassan, a rising star from the amateur ranks who is gunning to take on the existing champions. And maybe the corporations too. Your outfit is a muted orange coverall style garb topped off with a Speed Racer style of helmet. 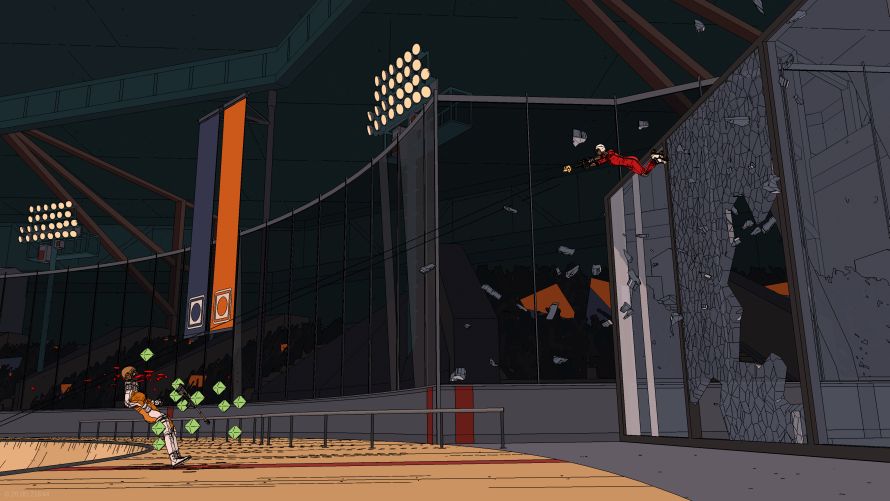 There is a definite learning curve in coming to grips with moving Kara. Initially, she feels very stiff and you need to know where you are going ahead of time to reach your destination. You cannot instantly change directions and must plan your movement accordingly. With practice, you get better at moving around.

You can complete each level with the basic skating and shooting skills but to truly master each one will take much practice and patience. Each level comes with a variety of task and challenges and time completion bonuses. Each level also comes with leaderboards so you can compare your skills against other players.

Rollerdrome – A Unique Mix of Gameplay

In addition to all this, there is a story component to the game too. Between each match or level, you can explore the locker room and a briefing area. In the locker area you can find out Kara’s back story as well as those of your main opponents. Further, you can use the briefing area to watch a slide show to learn about the rules, enemies, tokens, and other matters of the Rollerdrome League. There is also a LNK Terminal where you can log in to get your latest status and Rollerdrome standings of other competitors.

The intent of the level challenges is to increase the longevity of the game but whether that goal is realized remains to be seen. The skill level to attain all the level challenges will probably deter most from putting in the necessary time. Roll7 has included options to tweak the gameplay to make the game accessible to players of all skill levels. Once you have completed the Campaign, a new – Out For Blood – mode will open up. Out for Blood is a Challenge Mode to further test your agility and skill levels. 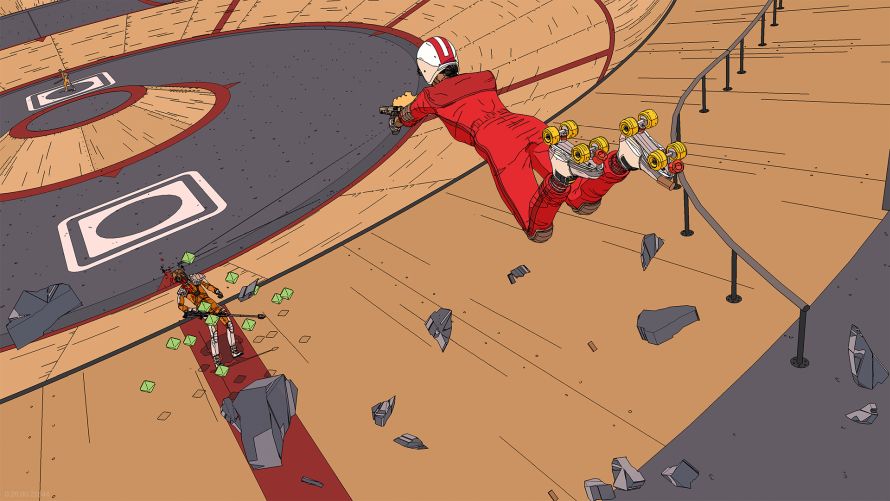 Roll7 is to be applauded for putting together this unique shooter skater game. I really dug the 1970s vibe of the game both in the art direction and especially the score. This makes the game stand out aesthetically from other games. The only nit I have with the 2D art style, is that it makes judging jumps difficult due to the lack of depth perception. With a little practice, I was able to acclimate to it. Rollerdome is a blast to play, tailored to appeal to players of all skill types. 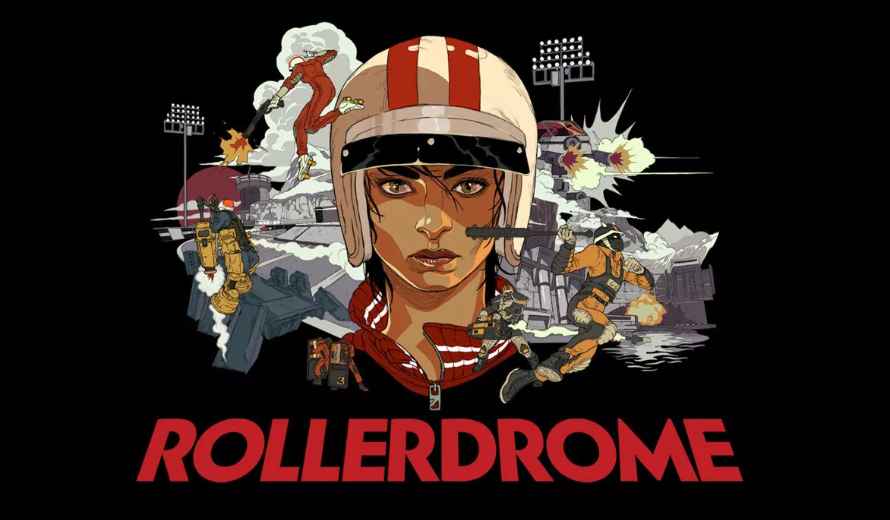