Beat-em-up games are an essential part of gaming’s history. River City Ransom is a rock-solid brawler that still holds up today, in spite of its advanced age. River City Girls walks a fine line between innovation and homage that feels almost perfect. It’s not easy bringing beat-em-ups into the 21st century, but this game pulls it off. Between the charming graphics and that wicked soundtrack, there’s a lot to dig into here.

Calling this game stylish and cool feels like a disservice, honestly. Every fiber of this thing oozes charm, from the menu design, to the sprite work, to the music. Even the still images that accompany the shops are so good I want them on my wall. Every character is brimming with personality. Part of this has to do with the voice talents they recruited, but part of it is just exceptional writing. If you’re a YouTube enthusiast, there’s a good chance you know at least a few of the voices here, but even if you don’t every performance is a treat. I know I glossed over the music pretty fast, but believe me when I tell these tracks are exemplary.

Case in point, The Hunt. I wasn’t prepared for this. Not for the presence of vocal work, nor for the quality of those pipes. This is above and beyond what you’d expect from a sequel, even a lovingly-crafted one like River City Girls. You can find the whole dang soundtrack on Spotify (and presumably other streaming services), and find it you should. The rest of the voice work is great, but it’s overshadowed by those songs. Each and every one is getting regular rotation privileges with no delay. Also I guess there’s fighting to talk about? 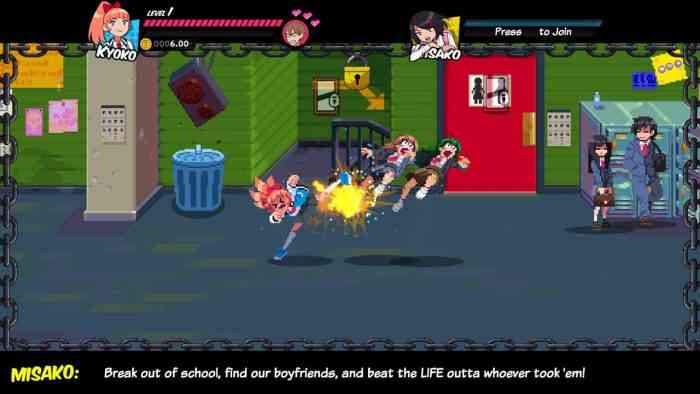 Like any truly stellar beat-em-up, you’ve got to be keyed in to succeed. Button mashing often hurts more than it helps, while a sprinkle of strategy can save your life. There’s a huge roster of moves to choose from, with each character getting a different set. Kyoko gets a super-powered dab, for example. Amusing at first, but eventually mission-critical. I was slow in visiting the dojo for more moves, which was a terrible mistake. Don’t sleep on shopping for skills! I stumbled upon a spinning drill kick that blew my strategy wide open. Boosting stats is all well and good, but you can’t eat your way to a donkey kick.

Bosses are meant to be tough, which is fine? Yet, the hardest part of these fights was easily all the waiting. Every boss is a mix of savage assaults and nervous thumb-twiddling. Breaking this sacred rhythm usually proves fatal. Yes this acts as an homage to the glory days, but it gets real old by the fifth time or so. I played it extra safe with most fights solely to avoid the time investment required for repeated attempts. The upside to this system is you’re able to memorize the patterns and win, so long as you’ve got the patience for it.

Eat Your Way To Victory

One of the highlights of River City Ransom was stuffing food in your face until you punched like a speeding car. A version of this system has returned, albeit with fewer exploits. On top of that, you can equip sweet gear to accentuate your ass-kickings in the manner of your choosing. Sadly, the gear I found didn’t do all that much. Better to be balanced than broken, but it sapped a lot of my shopping spirit. Why should I pour hundreds of dollars into accessories if they only bless me with a 5% boost? The selection eventually improves a bit, but I was still more inclined to lean on skills as opposed to sick threads. Perhaps that was their aim?

Between the challenge level and the high volume of moves, you’re never bored. No, even lowly enemies can catch you unawares if your focus slips, which makes every fight a fun one. The soundtrack keeps your energy levels high, while the fight for true love (more or less) has you pushing ever forward. Even once you’re fnished, Misako and Kyoko are different enough to warrant separate playthroughs. I wasn’t a huge fan of the weird boss rhythms, and the shopping sections fell a little flat, but this game still bursts with that timeless River City charm. If you’re on the fence, thinking this a mere gender-swap, think again! These girls have all the ferocity and heart of their elusive boyfriends. Much more so, even. Fans of brawlers and badass girls alike won’t wanna miss River City Girls. 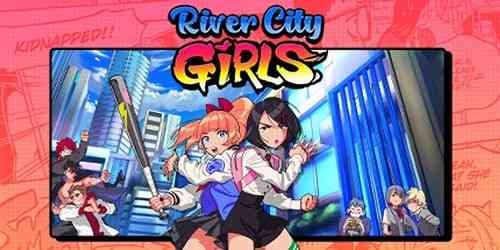