Rive is a retro styled platforming shooter that features fast-paced action and polished mechanics. While it shines in many aspects mechanically, some of the level design is imperfect and the inherent challenge often hinges on surprise obstacles. The experience is unquestionably solid, but many people may be turned off by the difficulty and the need to memorize the level through successive failures to progress past certain points.

Like many of its retro-inspired peers, Rive looks and plays fantastically. Two Tribes has really nailed the feel and challenge of 2D platformers from the 16-bit era while infusing it with the speed and style of modern gaming. This polish is most obvious in the game’s mechanics which feel smooth and responsive. Weapons are also styled to feel punchy even while your tiny tank takes up so little screen resolution. This is further reinforced by the sound design which adds the boom to your shots, and music which compliments the action.

While fine-tuning everything, Two Tribes also infused the concept of challenge into every aspect of the game. There are multiple gameplay styles to challenge yourself with and add more difficulty. You can only access easy mode after dying enough times, so you’re in for a challenge from the start. But this is where some of the shine fades; the challenge driving the game can at times feel unfair. Instead of challenging twitch reflexes and harnessing learned strategies, Rive often relies on surprise confrontations. These tend to come in the form of groups of explosive enemies which will likely kill you the first time. After you know where they will come from taking them on is easy, until the next random killer surprise. This scenario lead to many of my deaths. To complicate this frustration, there is no momentary invincibility when you are hit, making one explosive robot chain into the next often taking out most of your health in the process. 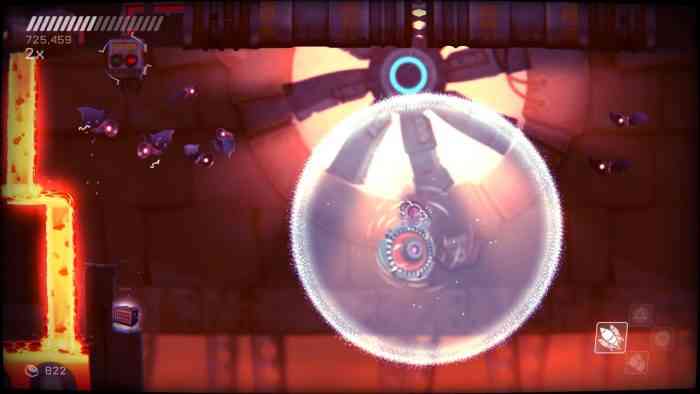 Challenge is fine, as even punishing difficulty can lead to an oddly satisfying experience. Games like Dark Souls show that the right blend of intrigue and adversity can be an addicting cocktail. But this is another area where Rive shows weakness. There is almost no narrative to be found, and little to drive you towards your next objective. While playing, I only had a vague idea why I was moving forward. Getting more loot or a high score doesn’t drive me, nor does it drive many other gamers. If challenge in and of itself isn’t appealing to you, then there won’t been much drive for you to complete Rive. 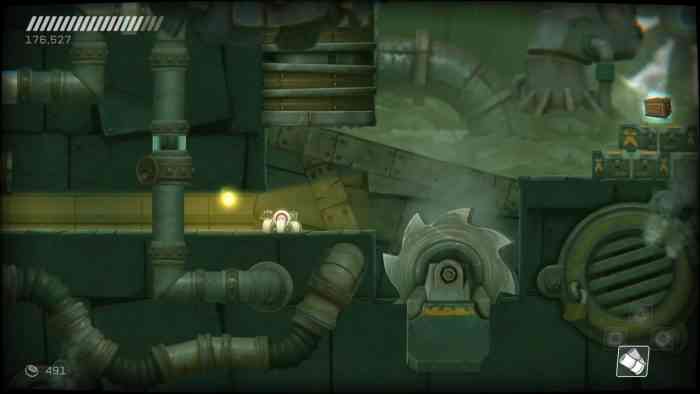 It would be unfair to say this shooter is a mixed bag. It is so well-designed that its mechanics alone merit a look. It’s just a shame that the moment to moment experiences are so thrilling and yet so unable to affect. If you are itching for a side scrolling shooter, definitely pick up Rive. The action is fast paced and I haven’t played a game with controls this tight in a long time. But if you are not well-versed in this kind of game, expect to die a lot. Anyone who is frustrated by repeat attempts, or trial and error gameplay, should probably look elsewhere. I hear Pony Island has great shooting mechanics too… 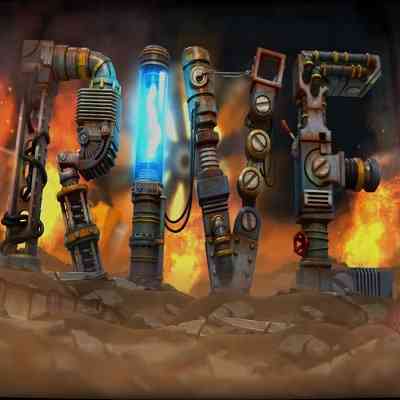