It’s been almost a year – since last November – but the second installment in the rebooted Tomb Raider franchise has finally landed on the PS4. Sony console owners had to bide their time as Microsoft swung an exclusivity deal with Crystal Dynamics to release Rise of the Tomb Raider on their console first. PS4 players had to either cool their heels for twelve months or break down and buy an Xbox One. If they had a powerful enough PC they could have gone with the PC port back in January. For the frugal and/or PS4 patient player, the wait is finally over. Lara Croft has come to Sony land.

Rise of the Tomb Raider had big footsteps to follow as the 2013 Tomb Raider took the franchise into uncharted territory and ‘Nathan Draked’ Lara Croft into a more action oriented direction. While there were some grumblings about the lack of actual tomb raiding, the overall consensus was very positive and the re-imagined Lara Croft was well received. Tomb Raider had great gameplay and graphics. Despite some tonal dissonance that had a very young and naive Lara Croft on her first adventure laying waste to hundreds of henchmen – a limitation of current video game strictures that also hobbles Nathan Drake – the game was a blast to play. New blood had been pumped into the Tomb Raider franchise. 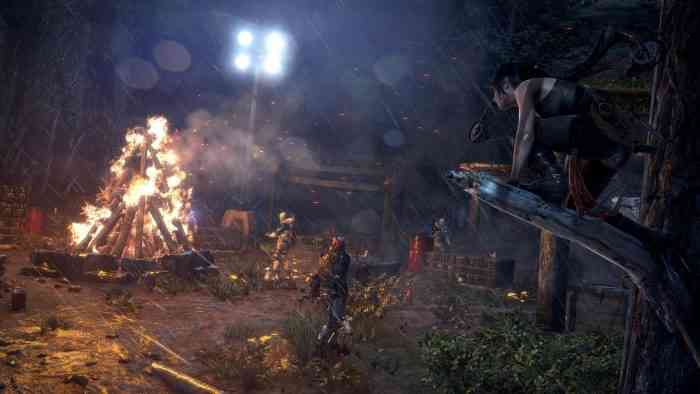 RotR scored well on the other platforms, about the same as the first game. I have a theory as to what it will take to push scores higher. As expected, patient PS4 players get the sequel with some meaty extras added to the pot. Billed as the 20 Year Celebration Edition this comes with the base game plus a ton of extras; 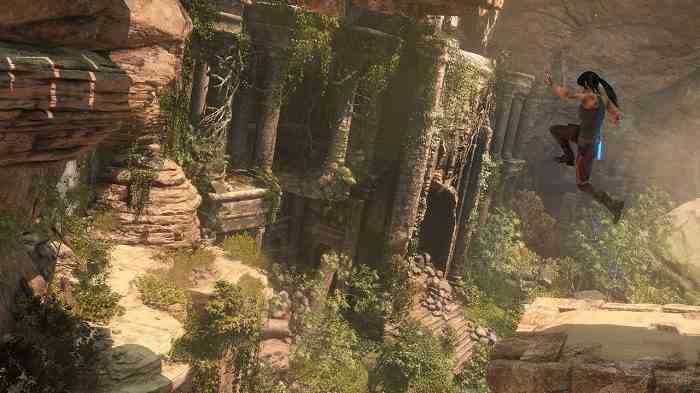 Let’s dive first into the main game. In Rise of the Tomb Raider, Lara is obsessed with vindicating her father’s lifelong dream of discovering the secret to eternal life. I am not going to spend a lot of time laying out the particulars of the main game. The game has been out for a year and most likely you’ve read the reviews and seen tons of gameplay videos by now. I’ll concentrate on highlighting what the PS4 version brings to the table that differs it from the PC and Xbox versions.

On the graphics front, Rise of the Tomb Raider plays at 1080P and a locked 30FPS. It’s a bit of a bummer that the Holy Grail of 1080P/60FPS continues to be an elusive goal with this generation of hardware. The sequel to the 2013 Tomb Raider expectedly pushes past the boundaries set by that first game. The worlds are bigger, the weather effects are more realistic and especially well done are the snow effects when Lara trudges through heavy drifts. Not only does the snow move around her in realistic ways but the depth of the snow effects Lara’s gait. She’ll stumble, struggle, and change the rhythm of her stride in response.

Speaking of Lara, in RotR she has gotten some nice upgrades. You’ll see more animations available for her as she leaps, lunges, runs, walks, etc. It all makes her come to life even more. Nice little touches have been added where she will reach out and touch walls and other objects at random. All of her activity is reflected in detailed movements of skeletal and musculature modeling. Very impressive.

The naturalness of her movements even extends to her interactions with her tress effects hair. Stepping out of the water after a swim, Lara will quickly wring the water out of her ponytail. It’s these little touches that really pull you into the game. The only distraction with the implementation of Lara’s hair is that it lacks the density or thickness in gameplay as to when seen in the in-game videos. No doubt a frame rate compromise. 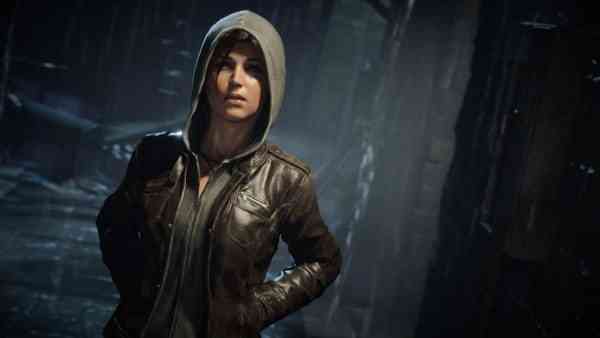 No game is perfect and some quirks can be noticed. Lara is the only one to get the tress effects treatment and the difference between her hair and other characters is noticeable but not distracting. Generally, the environments look fantastic with great if uneven detail at times. Texture work can be of variable quality. Most noticeable for me was the sometimes shimmering of environmental assets due to insufficient anti-aliasing. A bit of a bummer but overall Crystal Dynamics is to be commended. RotR is a very impressive technical display that ranks with the best of them, especially when taking into consideration this is a multi-platform release.

Controls are tight and responsive and the PS4 version is not saddled with the input lag found in the Xbox One version. As with the graphics, everything in RotR is expanded upon. There are more weapons, more crafts, and more survival skills for Lara to learn. Additional skill bonuses can be picked up if you decide to explore the bonus side tomb missions.

“RotR is a very impressive technical display that ranks with the best of them, especially when taking into consideration this is a multi-platform release.”

There are a dizzying array of challenge missions, relics, documents for Lara to discover  plus additional missions given to you by secondary characters. If you stick to the main storyline you can expect to log about fifteen to twenty hours. Tackling all the side quests and you are looking at thirty-five to forty hours of game time.

I mentioned earlier that the response to this game has been a little muted compared to the reboot. Much of the praise is focused on the technical and gameplay aspects but little is said about the characters themselves. Understandable as Lara is the only one in this franchise to receive any narrative attention. If there is one area I would ding Tomb Raider on the most, it would be this. For many players, this will be a non-issue but developing characters is one of those intangible elements that can push a series from well regarded to well loved. Hopefully, in future installments, the Tomb Raider series will continue to develop not just Lara as a character but give her a peer or two – true friends even, to share her future adventures with. 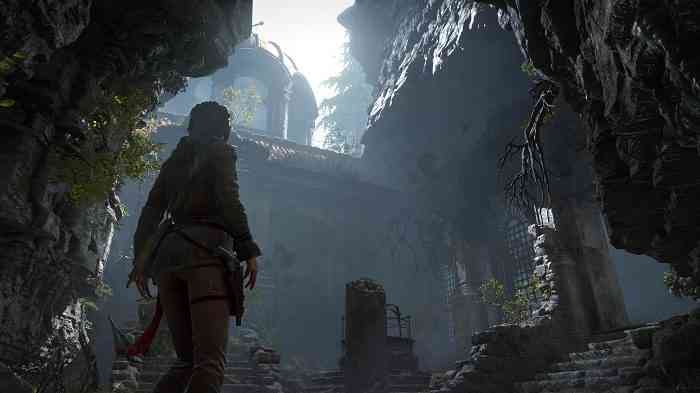 Creating a family of characters is the cherry on the top that is missing. Maybe this shortcoming has been recognized because after you complete the first mission, some additional missions open up. One of those is the Blood Ties mission from the Croft Manor. I would highly recommend putting the main game to the side at this point and playing Blood Ties. It brings much needed, and welcome, background material about Lara and her family to light that will increase your enjoyment of the main game.

Bar none, this piece of additional content gets my vote for the pièce de résistance of the whole package. If there is one defining difference between Tomb Raider and the Uncharted franchises, it is the emotional engagement I feel towards the Uncharted characters. Uncharted won me over forever by making me care about Nathan Drake. Tomb Raider – including these two reboots – have done little to make Lara seem like a character and kept her at arm’s length as a video game avatar. Uncharted has not only made me care about Nathan but Sully and Elaine. There is a family vibe that the best fictional universes generate that is lacking in the Tomb Raider universe. 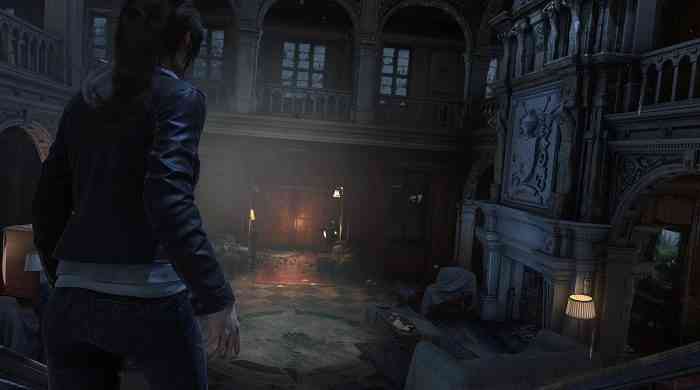 Blood Ties is the first real step in correcting that oversight. At least with Lara. This stand alone game takes place in Croft Manor as Lara struggles to find incontrovertible proof that she is the rightful heir to the manor and keep it out of the clutches of her vengeful uncle – Atlas. He is vindictive because he blames Lara’s father for his sister’s – Lara’s mother – death.

“Blood Ties is the first real step in turning Lara Croft from a mere video game avatar to a character you can have an emotional attachment to.”

This is a much needed personal journey into the events that shaped Lara as a person. Blood Ties also feels the most Tomb Raider-ish experience we have had in this new incarnation. This is an exploration of character even more than it is one of treasure hunting. There are no physical battles being fought here. This is an internal character journey as Lara discovers details about her parents, and more importantly about herself, that builds those sorely missing emotional bonds between character and player not present in the main games.

Croft Manor is a microcosmic representation of Lara’s adventure. In a state of neglect and disrepair, the manor is like a collage of Lara’s adventures. Portions of the manor are in good condition while others have degraded to the point that they resemble ancient ruins. The basement is a mix of wine cellar catacomb-like sections and crumbling tombs. Lara must follow the clues laid out in her father’s journals and recordings as well as letters left by her mother, uncle, and her faithful servant and Alfred stand in butler – Winston. 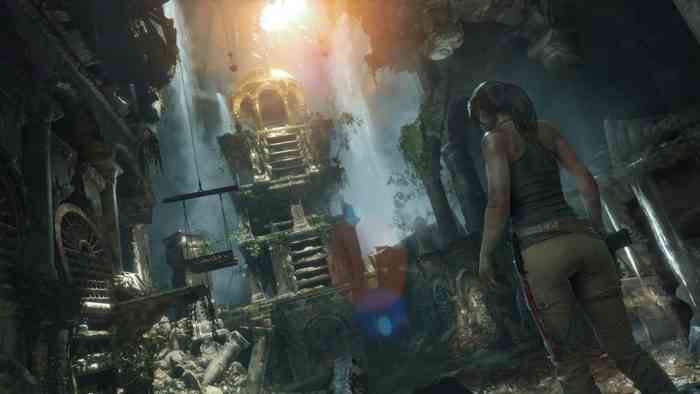 The manor becomes a character in its own right. It holds many memories and no manor would be worth its salt without secrets – be they rooms, passages, hidden objects or otherwise. The manor is a Croft treasure trove. Fans of the original Tomb Raider games who lament how the series has evolved will love this piece of content. Anyone looking to forge some empathy as Lara as a character will also be enthralled with Blood Ties.

There is a tomb full of additional material to go through. Some of it has been previously released as DLC including the Cold Darkness and Baba Yaga missions. The single player Endurance Mode has been enhanced to include multiplayer so you and your friends can team up.

There is another Croft Manor mission – Lara’s Nightmare mode which is the game’s answer to the zombie mode. Through the use of cards, you can tailor the experience to include such things as Big Heads. It has to be mentioned that the game’s lighting engine is put to fantastic use here as it transforms the stately Croft Manor into a haunted house. Very creepy. Very well done. 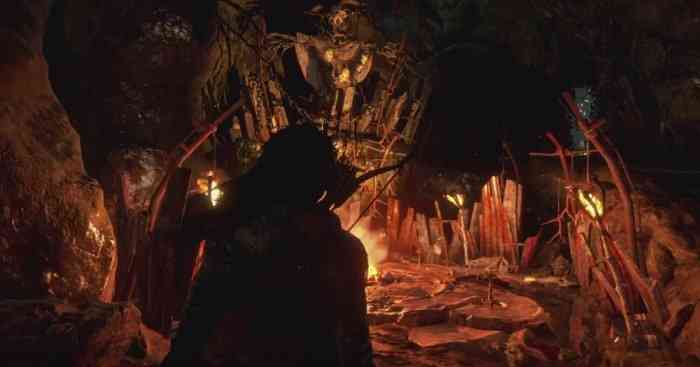 Also included are a variety of skins to change Lara’s look through various outfits. The most bizarre are the included skins that revert Lara to her original look from the first games. It’s very weird to see that version of Lara move through the environments of RotR. There is also a Playstation Virtual Reality Mode to try out that allows you to walk through Croft Manor.

For those thinking of upgrading to a PS4 Pro, there are rumblings that additional video options will be available that will allow players to tailor the visuals. It should be possible to turn on some enhanced visuals and/or pare them down and turn on an unlocked frame rate that can reach but not consistently maintain a 60 FPS frame rate. All the additional content found in the PS4 release will be available to players on other platforms too. The PS4 20 Year edition of RotR nicely bundles up all the extra content into one sweet treasure. RotR continues the ascent of Lara Croft.

This piece started off with a Tragically Hip lyric. Fitting to finish it with another one from the same song that sums up perfectly this overdue PS4 version of the RotR 20 Year Celebration Edition.

It was well worth the wait. 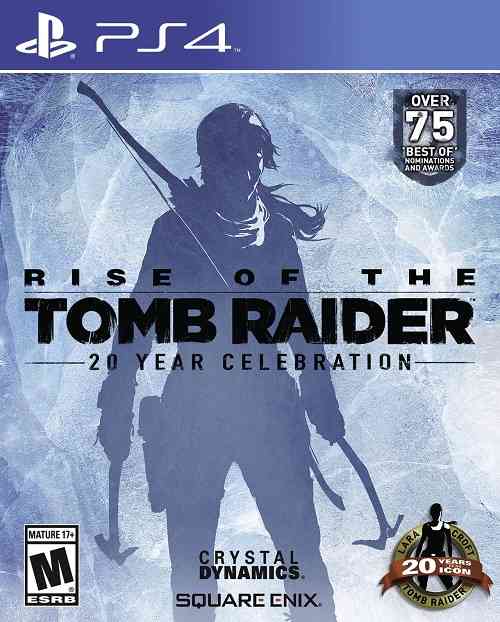