Resogun (PS4) Review – Shooter Fans Rejoice, the PS4 has Something for You

Sony’s PS4 has finally launched and there are quite a few games to check out.  One such game is a Resogun, a downloadable title on PSN.  It is free for PSN+ members, and should you not be a member it will cost you $14.99.  The reason I bring this up is that given the “free” nature of the game for PSN+ members I had some serious doubts that this would be that good of a title, but much to my surprise I found out otherwise.

Resogun is a twitchy arcade shooter that harkens back to the days of dodging bullets and enemies.  Right off the hop I have to tell you that the game is not particularly long.  Lasting only five levels you will fly (no pun intended) through the game’s content somewhat quickly.  If you are looking for a long and somewhat engrossing experience you won’t find it here, at least on the surface you won’t.  Hey, it’s an arcade shooter for goodness sake, so why would you expect anything different.

Something that most shooter fans will take note of is that the gameplay offers a fresh take on the usual 2D shooter screen.  Developer Housemarque has taken the normal flat back and forth landscape of most shooters and transformed it into a cylinder so to speak.  The settings you do battle in require you go in a circle, hence the whole cylinder idea.  You’ll go around and around as you face numerous waves of enemies.  Don’t worry though; you won’t get dizzy as you do.  As you avoid the various enemies and their attempts to destroy your ship you are tasked to “Save the Last Humans”, something that brings back a feeling of Defender or Choplifter, but for the new age.  Finding that one human on the other side of the level who has been let loose, picking him up and taking him to safety is pretty satisfying in its own right as you are not only saving that little human, but you get ship upgrades or bonus points too.  I found this combination of shooter and saviour pretty neat and quite addictive, given that I came back to the game more often then I anticipated. 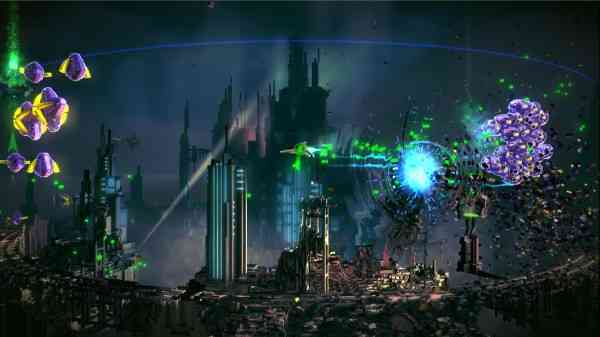 One of the neat things I found was the control set up.  Yep, something that his ADHD gamer noted was how the control factored into the “twitchiness” of the game.  Controlling movement is as simple as using the left analog stick, while shooting is handled by the right analog stick.  Yes, you heard me right, you use the right analog to shoot forward or backwards.  Trust me, you’ll need it too.  What found is it allowed me to use different strategies as I could go in the opposite direction of the enemies I was facing while still firing at them.  It adds to the nature of moving back and forth, up and down.

Along with the movement and shooting controls you also have a few “specials” such as boost, bomb and overdrive.  The latter has to be charged up, but once it is ready you can open up a big ol’ can of “whoop-ass”.  Of course this is a timed move and only lasts so long, but it can get you out of a jam when it is available.  The other feature I found quite useful was the boost.  Here you can speed up from one side of the level to another, but as you do so you are impervious to enemies and once you stop a small blast destroys any enemies in your immediate vicinity.  Like the overdrive, and bomb, it is a key feature to use when panic and mayhem ensues. 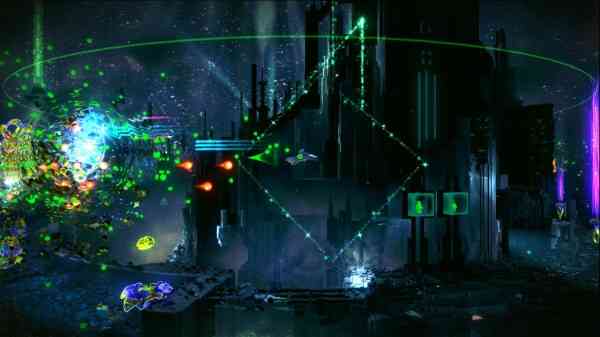 I think it worth noting is that the Dualshock 4 controller is great for this game.  I have NEVER (yes, I put that in caps for emphasis) enjoyed gaming using the Dualshock 3, but the successor to “the controller I have never liked” does an admirable job here.  Sure, Resogun is an arcade shooter, but given the twitch nature of the game (e.g. avoiding death at all costs) the Dualshok 4 handled it really well and the new size of the controller and new analog sticks prove up to the task.  And although this is not an FPS game, I was able to notice that the new triggers were up to snuff too for what they were assigned to do.

In regards to overall playability, there are four skill levels to challenge you.  I have to say that even on the easiest setting there can be a lot of craziness on screen.  Resogun really does scream “old school shooter” in such that that it really does test your skill.  That being said, there are no controller throwing moments though, and if you are skilled enough, something which I really wouldn’t say that I am per se, you can get through the levels using your wits, good timing and quick reflexes.  There are also three different ships for you to choose from, each one with their strengths (e.g. agility or overdrive) and anyone who plays Resogun will find themselves attached to using one of the three more often than the others. 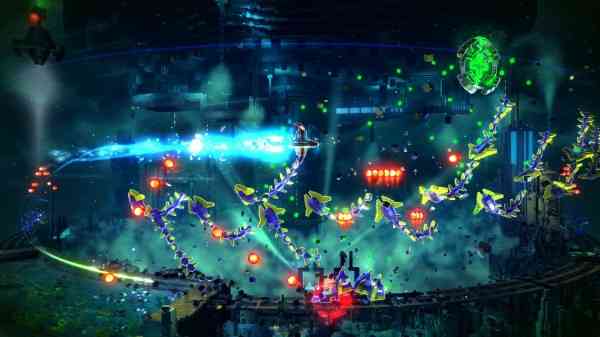 As mentioned earlier, Resogun is only five levels long.  Each level ends with a large boss that can add to the challenge of the game.  Once the game is over, it is over.  Where some of the addictiveness lies though is in beating the game in each skill level and then beating your friend’s high scores.  There is also an online co-operative mode where you can take on the game’s levels with a friend.  There is nothing particularly special too this as there are no cooperative only features.  Finally, should you just want to challenge a particular level, you can choose to do that as well as opposed to playing the arcade mode (all five levels in a row).

Presentation wise, Resogun is pretty slick.  Each level is slightly different (e.g. there are water areas on one and in another you have molten rock shooting out in the air) so there is some variety.  What I really enjoyed was that the levels take damage from enemy ship debris and large explosions.  It was neat to see the remains of buildings or craters in the ground.  Of course where this game really shines though is in the use of particles. Man there is a ‘whole-lot-of-pretty’ going on all at once especially when you destroy any of the five bosses.  All of the included eye candy occurs without a single technical hiccup too.  As for the sound, it is well suited for the content material.  From the techno soundtrack, the in-game announcer, to the sounds of shooting and blasting away, it all just works and makes the game that more enjoyable.

At the end of the day PSN+ members are getting Resogun as a bonus with their paid membership, but even if this was not the case, or you do not have the PSN+ membership, I have no problem recommending this game if one decides to purchase it.  With solid visuals, twitch gameplay, and a strange and mesmerizing addictiveness to it, you really can’t go wrong by spending time with this game, especially during those times when you need a break from COD, BF4, Killzone, or whatever other mainstream title you may play on your brand new PS4.