Simplicity and pretty colours. That’s about the easiest way to sum up Knack in a quick few words. While I actually enjoyed my time with the game I have to admit that it never really advances past a one button puncher that’s easy on the eyes. Sony and Japan Studio had the chance to come out of the gate on the PS4 with a system seller and console mascot and unfortunately the game doesn’t quite live up to that billing. I have to stress though that despite its simplicity it’s still a heck of a lot of fun. The only real issue is that apart from the ooh and aah moments of shiny things we’ve easily seen almost everything Knack has to offer more than one time before.

Mark Cerny, the lead system architect for the PS4, is an accomplished game designer who has his name attached to a number of Sony’s more well-known franchises. As a matter of fact a lot of the core characters we’ve come to know and love have his pedigree attached to them such as Spyro, Ratchet and Clank, Crash Bandicoot, and Jak and Daxter. An impressive list no doubt but unfortunately, regardless of Cerny bringing his platforming knowhow to the next generation of gaming, we are left with last generation ingenuity. 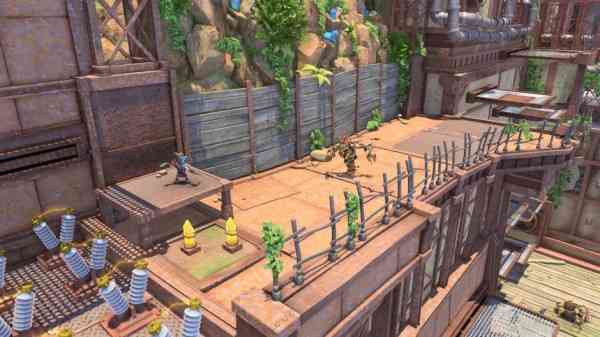 Starting into the game we’re told of a conflict between humans and goblins. Goblins have attacked a human settlement with armaments previously unavailable to such a primitive race. The humans need to go on the offensive to protect themselves and it’s here where we’re introduced to ‘Knack’. A tiny little being made up of relics, an ancient power source that humans have been using for years but still don’t fully understand, Knack is cute and hardly intimidating. Created by Doc, Knack harnesses the energy of these relics collecting them as he finds them to become one massive piece of butt whooping bad-assery. That’s a word right? The presentation, while being VERY cartoonish, gives way to a much more grown up story than I was expecting. Sure it’s full of clichés and some obvious plot twists that you’ll see coming for miles but regardless of that it’s enjoyable to watch unfold.

Knack doesn’t waste any time throwing you into the fray. After a quick tutorial style level you’re on your adventure. It starts out with simple controls but regardless of its ease of access gives way to a deceptively difficult game. I played through on ‘Normal’ and died many more times than I expected to. I even put the game on ‘Easy’ for my 5 y/o thinking that this is a perfect game to introduce the PS4 to my child with and he nearly gave up because he couldn’t get anywhere. There’s a solid chance that my kid just sucks at games but I’m thinking that this might not be the child’s game that a lot of us anticipated when we first saw it.

The mechanics as a whole are pretty bare bones as we have a jump button, attack button, three special attacks you can build up and a dodge mechanic. That’s it, that’s all and no matter how far into the game you get there isn’t much more to it. Along the way we are introduced to some neat modifications of the lead character with ice crystals taking the place of relics or clear crystals so you can sneak past security beams undetected. All of these modifications are more impressive to look at though than they are in actual practice. When Knack morphs into his full size beast mode or into one of his modified selves he is an impressive sight to behold and one of the most enjoyable things to take in during the game hands down. Through the collection of crystal artifacts you can unlock interesting takes on the main character such as Vampire Knack, made up of ruby crystals or Ultimate Knack, a being of shimmering diamonds but that’ll take a lot of gameplay as you need multiple crystals to unlock these variations and they’re not easy to come by. You can download a companion app, Knack’s Quest, that offers up match 3 styled gameplay a la Bejeweled that will sync up with your PSN account though that offers up collectibles that you can win and port into the game. A simple addition but one I used heavily to unlock a lot of goodies. You should be able to find it in your app store of choice for iOS or Android. 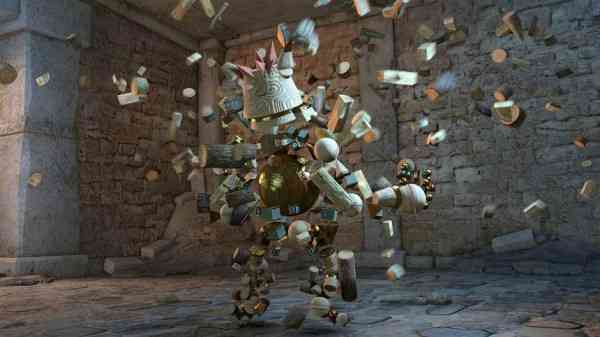 Each level is a joy to take in with a fixed camera style that works perfectly. Not once did I find myself in a ‘bad camera’ situation and I’m usually a stickler for having my own camera control. All the locales are absolutely gorgeous with bright colours showcasing the new hardware well. I mean it won’t win any awards but it’s nice to look at as you go from mines to forests to alien-like caverns full of strange relic technology. As I mentioned above though, the most visually impressive portion of the game is Knack himself in all of his forms. This is Sony’s way of saying ‘LOOKIT I CAN DO!’ as we see hundreds of bright coloured relics all individually rendered floating around Knack’s body. I actually found myself getting more into it as Knack bulked up and the score picked up its pace.

A tried and true gameplay element of ‘beat all these bad guys before the next door is opened’ is employed and while fun at first can be replaced with a feeling of constant repetition. Enemies might look different too but level to level it’s essentially a re-skinned version of what you started out doing from the get go. Start small, collect relics to get big, get a neat mod to do something cool, rinse and repeat. Quite honestly the idea behind Knack is a unique one and there was a missed opportunity here to bring something innovative that gamers haven’t seen before. Perhaps this is on purpose as a ‘play it safe’ bet but if Knack is possibly granted a sequel it would be nice to see a bit more depth in the gameplay.

Tying the whole package up you have got a fairly decent score with a very cinematic feel to it. As the action gets heavier the music will crescendo in time and pull you in. One of the things I got a kick out of was hearing all the relics pieces fit into place on Knack through the speakers in the Dualshock 4 controller. It’s a silly addition to be sure but is still neat to hear. Add on a solid cast that provides well-acted characters and you’ve got yourself a game!

Even though Knack isn’t bringing anything revolutionary to the platforming experience it’s still a game that deserves to be played. It showcases some of the PS4’s new graphical muscle and is a blast to play. No matter how linear or repetitive the levels are you’ll still enjoy taking everything in. Knack manages to be magical regardless of its weaknesses and personally I hope the little relic monster gets another chance to shine in a future title.