After the marathon of emotionally hard hitting games this past year it was completely refreshing to take a step in the other direction with a fun, whacky platformer; and I had an absolute blast playing Rayman Legends. It was a definite surprise to find such a finely crafted side-scroller on a non-Nintendo console. Legends was originally supposed to be an exclusive Wii U title, but the release date kept getting pushed back until it was eventually announced it that it was a multi-platform title. I’m sure the Nintendo fanboys will be chagrined that they no longer hold the monopoly on great platformers, but in an era where games like this are very few and far between it’s great to put this title on my shelf alongside the abundance of intense and violent titles that have dominated the Xbox 360 and PS3. As a mature gamer that doesn’t own a Wii or Wii U, I love that I can now get together with friends for a night of gaming that doesn’t involve zombies or headshots. Legends had me grinning the whole time, even as I struggled or died time after time in some very tricky spots (of which there are many). Legends is a wonderful throwback to the games I grew up on and made me realize what I’ve been missing all these years of being busy with the action-adventure genre I am normally partial to.

Rayman Legends is a hectic, charming joyride. Many of the levels are designed as a continuous flow of movement which puts a lot of emphasis on timing. The characters run, jump, crash and bounce off of almost every surface in the game with urgency, and the game can be very fast paced at times. Each level is beautifully crafted to perfection, full of secrets and hidden goodies at every turn. There isn’t much of a continual plot but the main goal has you freeing the Teensies who are creatively imprisoned throughout the levels. Their cute little squeals for help broke my heart anytime I couldn’t quite make it to them, but with 700 of them to be found in the game collecting them all in one go just wasn’t going to happen. Between rescuing Tennsies and collecting Lums there’s no shortage of rewards and bonuses in each level. One of the most unexpected surprises was being able to unlock remastered levels from Rayman Origins, essentially giving the whole game a kind of 2 for 1 deal. There are also daily and weekly challenges that are constantly changing, bumping up the replay value and showing off the depth of the gameplay design. It’s an extremely generous game that keeps on giving beyond the 12 hour single player campaign. 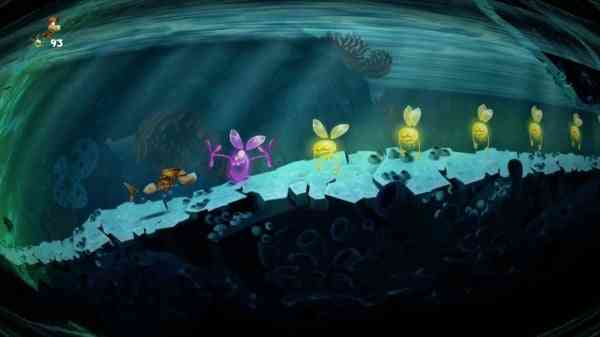 Legends manages to keep every level fresh, something that many platformers fail to achieve. The puzzles are well plotted and don’t feel too repetitive or frequent while the pacing keeps a perfect balance that at times pushes you at rapid fire pace, but it can also leave you more space, and time, to look around. There is a perfect blend of the standard platforming challenges mixed with some sneaky puzzles and aerial shooter-inspired segments. Each world ends with a musical level that has you crashing and jumping to the beat of a cartoonishly remastered version of a classic song. It was impossible to not find childish enjoyment in battling dragons to the tune of Black Betty.

Legends supports up to 4 players and it can get chaotic trying to keep track of who’s who on the screen during these times, so I stuck to a 2 player co-op which was great. The respawn system is very fluid, where upon dying you turn into a moveable floating bubble that can be grabbed by your partner to respawn at a convenient location. This really helped with the pacing of the game and was very handy especially in the trickier levels.

The Wii U version takes a slight edge with the playability of the fairy-like Murfy character. With the Gamepad, Murfy is controlled through touching and tapping the environments allowing the main character to follow through automatically. Without the Gamepad, and on the Xbox 360, he’s controlled by button prompts that can get muddled, especially in faster paced portions of the game. Murfy is a great character on the Wii U to allow for players of a lower skill set to still have something useful to do. Although Legends isn’t open world, each level and world is accessible through a gallery of paintings, making it super fast to switch through them to play at your chosen pace. As the difficulty varies quite a lot from level to level, it’s easy to avoid too much frustration by just hopping into another level for a bit of a break and then head back to that one level that may have you stumped at the time. 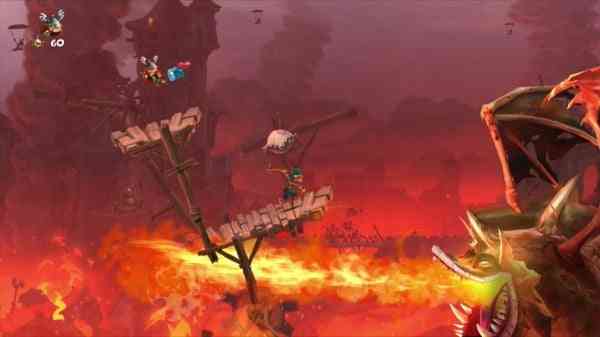 The excellent gameplay goes hand in hand with the stunning visuals. The cartoony style jumps off the screen with brilliant detail and eye-popping colours. The design is truly spectacular, with each level more creative and original than the last. It’s a true accomplishment to stay fresh throughout the entire game but it managed to keep surprising me time after time. Every level is a work of art that took me from lush jungles to swampy marshes to undersea reefs and burning medieval castles. As I continued to play I found myself looking forward to each new level as I anticipated whatever was coming next.

An entertaining musical score and lively sound effects keep pace with the visuals as everything tinkles, crashes and pops as you race along each level. It’s a hectic cacophony of noise, fitting in perfectly with the whacky little world. With such chaos happening on screen, the sound is free to be just as quirky and fun. And seriously, the musical levels are hilarious.

Rayman Legends is a great little break from reality that proves platformers haven’t gone the way of the floppy disk yet. Ubisoft’s masterpiece has great pacing with tricky levels that border on vein-rupturing frustration without losing its fun factor, and a good platformer isn’t complete without moments of controller throwing game rage anyways. Both single player and co-op feel finely tuned, but games like this are always best when surrounded by friends who can celebrate and cheer you on. With constant rewards and unlocks combined with some great visuals, sound and awesome playability, Rayman Legends stretches your dollar to the max and is absolutely worth the price of admission.