Developers Mercury Steam team up with Climax Studios to bring the popular console release of Castlevania: Lords of Shadow to PC owners, albeit a little later than I expected. Originally released in 2010, PC gamers finally get to play this Ultimate Edition via Steam, which adds some updated graphic fidelity, plus the two DLC packs that were previously released. The question I had was not only why are they releasing a PC port three years after the fact, but is the port actually worth it for those that have been wanting to play it on PC this whole time and does the gameplay hold up.

As a 15GB download on Steam, it was obvious from the get go that the visuals have been drastically improved in certain areas along with a solid 60 frames per second if you have the proper hardware. Coupled with Steam’s Big Picture Mode and full controller support, playing this on your TV with a controller is most definitely the way to play if you have the capability to do so. It should be noted that while Lords of Shadow does contain keyboard support for gameplay, it’s nowhere near as precise or fluid as playing with a controller. I used a wired Xbox 360 controller to play but I did test a level here and there using the keyboard and found it quite awkward.

You play as Gabriel Belmont, a hero who constantly suffers with the loss of his wife by evil forces.  He is somewhat reunited with her but she’s neither living nor dead. She guides him to be the hero the world needs to survive the oncoming attack of evil. While at times cliché, I actually quite enjoyed the plot as a whole; especially the exceptional ending that sets up the sequel due out next year. These days you’re lucky if you get ten hours of gameplay from a campaign, but Lords of Shadow will easily last you around fifteen to twenty hours depending on the skill setting, plus the two DLC packs add another handful of hours as well. For the $29.99 asking price, there’s certainly a lot of value included within, even if it is an older title. 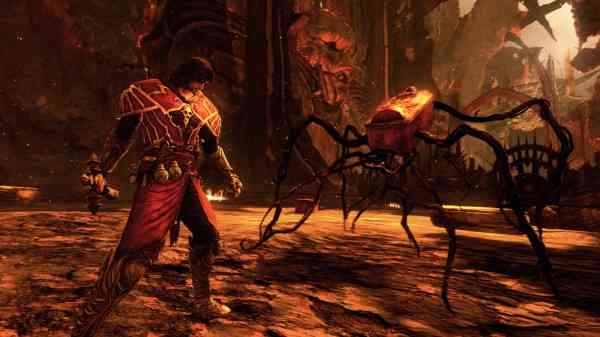 As you begin Gabriel’s journey the first thing you’re going to notice, and either love or hate, is the fixed camera angles. For a third person action game this isn’t very common, as you generally want to see all around you, especially in a combat heavy title like this. It will definitely take some getting used to and you will get hit many times from enemies you can’t always see. While the fixed camera does work for certain aspects, such as platforming and specific puzzles, it becomes somewhat of a nuisance during combat sections, though not unplayable or a deal-breaker by any means, just something you need to know.

Gabriel will explore many areas that vary from snow-covered lands, forests, ruins, and even castles along his journey. While linear in fashion, there are a few branching paths that will hold some secrets for you to uncover and even others that will require you to replay certain levels over again once you’ve acquired specific skills to access new items and areas.

As for Gabriel’s combat prowess, the mechanics will feel very familiar if you’ve played any games like God of War or Dante’s Inferno. You have access to regular and wide attacks along with a jump, all of which can be upgraded allowing new skills and abilities for new and devastating combos. While the core battle system feels a little stale you’re constantly earning XP, which can be used to unlock new attacks, combos, and abilities. This attempts to keep things fresh and makes Gabriel constantly increase in power. Once you reach the halfway mark of the game the combat does tend to wear thin slightly as it becomes repetitive once you have your favorite attacks and combos that work best for you, thankfully the story is intriguing enough to push you forward.

You eventually unlock the light and dark magic system that Gabriel will have at his disposal. When enemies are defeated they drop orbs that can be consumed and stored. When light magic is activated attacking enemies actually heals Gabriel, and if dark magic is activated he will do extra damage when attacking. I quite enjoyed this system as a more skillful player can use their dark magic to progress quicker, whereas lesser skilled players can rely more on light magic to keep their health up when needed. Eventually light and dark magic comes into play with some of the puzzles contained within as well. 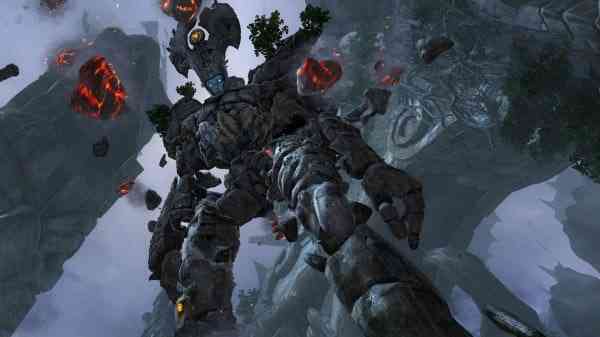 Not only will you be battle, platform, and puzzle solve; there are also spectacular boss fights that mixes up the gameplay. These were without a doubt my favorite part of Gabriel’s adventure. Titan battles involve you fighting against a massive behemoth where Gabriel’s height might match a finger length to one of these monsters. If you’ve played Shadow of the Colossus, these encounters will feel very familiar, as you don’t defeat them by just hacking and slashing, as you need to climb and attack weak spots instead. These set pieces are easily the most memorable of the whole adventure, and aside from one extremely frustrating titan boss fight, I really enjoyed them all and wanted to progress just for these battles. It should be noted that I tried to do one of these battles with the keyboard instead of the controller and had an incredibly much harder time due to the quick time events that require awkward inputs with the movement keys. These battles are clearly designed for use with a controller instead and should be played with one without a doubt.

Gabriel will become very proficient in his climbing and swinging abilities as his adventure continues on, and you’ll need to perfect your platforming skills to gain access to certain areas to progress. You’ll climb walls, swing across gaps, rappel downward, and even pull down objects blocking your path with your combat cross. Some of these elements also carry over into the many puzzles contained within Lords of Shadow. Don’t be fooled by all the combat early on though, as there’s a heavy helping of puzzles that eventually come, yet don’t drag down the pace of the game too much. There are a few puzzles that you’ll curse or look online for the solution (of which you’ll be glad is over) and I found these difficulty spikes quite random as they came out of nowhere.

So you’ve managed to complete the core game’s main storyline across the twelve chapters, so now what? This is where the Ultimate Edition comes through, as the two DLC packs included each offer another chapter for Gabriel to experience and explore. The first is the Reverie DLC that is a highly puzzle focused DLC offering, though with an interesting twist to the main narrative. There are no massive battles to be had within Reverie, as you’ll simply defeat a pack or two of low-key enemies before or after a puzzle as you venture onwards. As you get to keep Gabriel’s abilities up to this point, nothing seems close to a match for the powerful Gabriel aside from the puzzles that may have you scratching your head. There is a very interesting section where you get to play as a secondary character for a short time and this offers a great contrast to Gabriel’s brute strength approach to combat. Sadly the cutscenes in Reverie aren’t done in engine and are presented in that comic book style, which isn’t necessarily a bad thing, but doesn’t make sense when the second DLC, Resurrection, does offer them. The Resurrection DLC continues off where Reverie ended and is almost a complete opposite to what Reverie is. Gabriel fights an evil demon only known as “The Forgotten One” and is essentially one very long and challenging boss fight. Full in-game cutscenes are included as well and it was a fun boss to battle, even if it does take quite some time to defeat.

I was quite surprised with the quality and talent included with the voice acting in Lords of Shadow. Gabriel is voiced by Robert Carlyle (28 Weeks Later, The Full Monty, and Trainspotting) and he does a fantastic job throughout from beginning to end. The same goes for the other big name on the voice acting list, Patrick Stewart (X-Men and Star Trek: The Next Generation), who voices Zobek, a friend of Gabriel and the narrator of the story. The other voice talent also do an amazing job and I was quite impressed with everyone, as we all know that the voice acting can go either way in most games. The soundtrack should also get a special mention as the orchestral tunes fit perfectly with the setting and backdrops throughout. 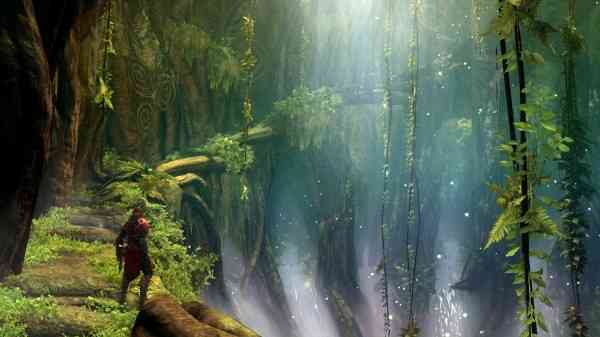 As for the visuals, there’s clearly a difference on the PC version with a high end gaming machine when comparing to the console versions from three years ago. With support for Eyefinity and Crossfire, as well as SLI setups, the textures may not be different from the original version, but everything looks much crisper and sharper due to the PC options like AA contained and enhanced lighting within. Looking at screenshots, you wouldn’t guess that Lords of Shadow was a port of a three-year-old console game, but seeing it in action at a solid 60 frames a second only helps its gorgeous visual fidelity. While technically it’s not an HD version we’ve seen old games do lately, it’s defiantly the prettiest version you’ll experience.

I should note that the loading time has been drastically improved, even being mere seconds at times. Fans playing it again will appreciate this. The only real issue I noticed with the graphics was that the cutscenes have been left untouched. So while the main game itself looks fantastic and sharp, the cutscenes look nowhere near as good as they’re already pre-rendered. Lords of Shadow only suffers from the odd moment of hitching here and there, usually just as a cutscene is about to play, but other than that it’s smooth sailing throughout and is a fantastic port overall.

With reasons to replay levels once again after you’ve acquired new skills and new challenges, and the addition of Steam achievements, there is some decent replayability once you’ve completed the main campaign. With the two DLC’s included you’ll get more than twenty or so hours of playtime too. While I’ve never been the biggest Castlevania fan and passed on Lords of Shadow when it originally released on consoles, I’m quite glad I got to play this PC version, with a controller nonetheless, as I quite enjoyed the story and characters. I am now excited for the sequel to arrive. I recommend Lords of Shadow, even at the full $29.99 asking price, but if it’s ever on the popular Steam sales for cheaper, make sure you pick it up so you can experience a Belmont’s adventure as this is the version to play.