NHL 14 (Xbox 360) Review – How Does EA Manage to Continue to Improve this Series?

I’ve been playing the NHL series since its inception back in the early 90’s. The systems back then are what are known as retro gaming consoles today, so I’m kinda feeling old. The Sega Genesis and the Super Nintendo had very simple and easy pick up and play versions of NHL hockey, especially when compared to the current crop of NHL games today. As simple and fun as they were, hockey gamers wanted realistic games that would match on ice gameplay. EA Sports has done a fantastic job of the long running series; with a few hiccups and a couple of hits and misses we arrive at NHL 14, the newest game in the yearly franchise.

The core gameplay of the NHL series has not really differed much in the last few years. EA has been busy tweaking and adding from game to game to enhance the already fantastic feel. They have employed a “If it ain’t broke why fix it?” attitude. The results speak for themselves, as the series won over 26 awards last year including sports game of the year.

One of the major reworks in NHL 13 was the collision physics; this year it gets a bit of tweaking, particularly in the speed and momentum area. You now have better control on how fast and how hard bodies will make contact. For this to happen opposing players ratings are taken into account. For example, a player’s size, abilities and even what hand they shoot with are all calculated into how collisions end. Smaller players with fantastic abilities can escape bruising hip checks with just a glancing blow, or they can be stapled to the boards if the other player has better attributes. Pretty technical stuff eh? As I have been playing I’m finding this makes for a more realistic and smoother game, although it can be frustrating to get out hit or out skilled. The control mechanism also feels better whether you make the hit or not. The new physics are not limited to the skaters either as they can also affect the netminders. Goalies react to incidental contact with all new animations sometimes pushing the offending players back; it is definitely fun to watch and adds another level of realism. 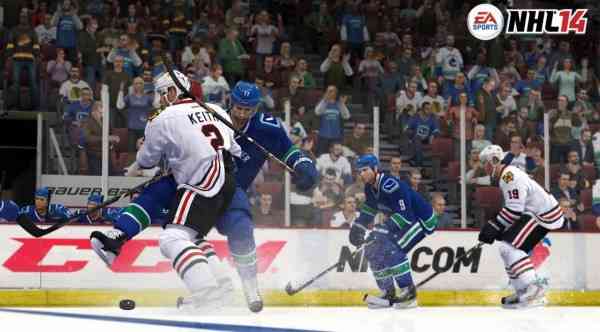 If there is one thing I’ll admit it is that I’ve always been weak on the defensive side of the game, as I tend to have a devil of a time controlling the blueliners that I would like. NHL 14 has added a new defensive strafing feature, which I believe will help hone my defense as I play all season. Part of the True Performance Skating, this tool gives you the ability to laterally strafe across the ice while still facing the opposing player. I’ve lost count on how many times my player has gone awry as I try to contain my opponent. Strafing improves body-to-body positioning and can set up a big hit or perfectly timed poke check. Another aspect of the skating is a quicker pivot too. Your player, be it a defensemen or forward, has not only an extra step but they can turn with greater ease and accelerate much quicker. In NHL 13 I was always finding my player flatfooted or extremely slow to recover from contact or cuts right in front of me. As I played this years game I could feel the increase in foot speed and acceleration right from the get go, which once again transfers into a much cleaner and smoother game.

Now, along with the collision physics and new skating features comes one of my new favorite features, one touch deking. I’m not one to fly around and do countless dekes and spin-o-rama’s, but the new one touch system actually adds a realistic dimension to the game. The old style of deking was by far my most frustrating mechanic in the game. It was hard to use and clunky, and quite unrealistic. I remember quite a few embarrassing times while playing online having half my team spin-o-rama’ed out of their jocks. The new dekes are quick and simple and result in realistic game changing moments for everyone who plays. Teams with fast stick handling type players will absolutely excel with the new feature, although any player on any team can pull them off. Keep in mind though that a bruiser will not have the same dexterity as a highly skilled forward, which can put your team into compromising situations.

Incidentally, I find it a bit ironic and disappointing that with all the new stick/skill type of changes I still suck at face-offs (*sad face*). Since it was revamped a few versions ago I have a terrible time consistently winning them like I used too. In fact of all the games I’ve played in NHL 14 I have only won a few outright…yeah I suck. I guess practice makes perfect is what I will hope for here.

Fighting has always been a part of hockey, and in my opinion I believe it should always be. In NHL 14 EA has revamped the fighting mode to a whole new level. You can instigate fights by delivering big hits or by harassing the other player till they drop the gloves. Sometimes harassing can backfire though and result in an instigating penalty, but most times an all out brawl issues. The control scheme here is pretty intuitive as you can tie-up opposing players and drop the gloves with the press of a button. You must time punches, grabs and jersey pulls using the triggers and analog sticks. I had to laugh, as there is even an achievement for pushing and pulling an opponent to the ice without throwing any punches. I’m finding that while it is a pretty simple set-up, mastering the fighting is a bit tougher, although you you’ll get quite a bit of practice given the amount of fights that can occur. To be quite honest it is the most realistic fighting mode I’ve ever seen in a hockey game, but is it necessary? I find it a bit over the top with more than 2-3 fights per game; I suppose one can turn the fighting level down a few notches. On the other hand the mode is so well done it is hard not to want to fight. 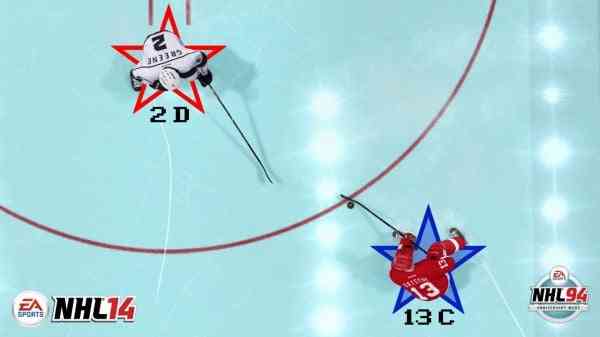 This leads me to another big addition in NHL 14, the NHL 94 anniversary mode. This brings back to my opening paragraph, reminiscing of the old days of gaming, especially the epic NHL 94 games I had late night with our Editor in Chief Kirby Y. Good times, good times. EA has reimagined the NHL 94 with an almost complete up to date graphics engine and control set. The game is blast to play with massive hits, long tape-to-tape passes and high scoring games. You can elect to play with the old school three-button set-up of 20 years ago or play with some of the new implements of NHL 14 included. Either way it is insanely fun. The simplicity is addicting, no line changes, no strategies just ‘balls-to-the-wall’ hockey especially in multi-player on that familiar NHL 94 blue ice.

NHL 14 now includes a retitled and updated career mode called “Live the Life”. It focuses on the young life of a unknown player making his way through various stages of his pro career. The ‘life’ choices you make affects his overall development, and this can include pre and post game interviews, relationships with peers and fans along with his management. You can also participate in endorsement deals as you travel up the experience ladder. The mode is very extensive and hardcore players should have fun with this one. Of course there are a myriad of other modes that are common to the franchise and you will spend a lot of time should you choose to explore them all, from quick games to full out seasons to Ultimate Team Mode to the once again deep online play.

It is hard to imagine the NHL series getting any prettier, but it has. EA has included a whole slew of small animation additions from goalies sprawling to forwards dekeing. The fighting mode includes damage to players after big scraps resulting in such things as puffy black eyes and bruises. There is no direct blood but redness on the face can be interpreted as a bloody face, and there is sometimes a missing tooth or two after battle. 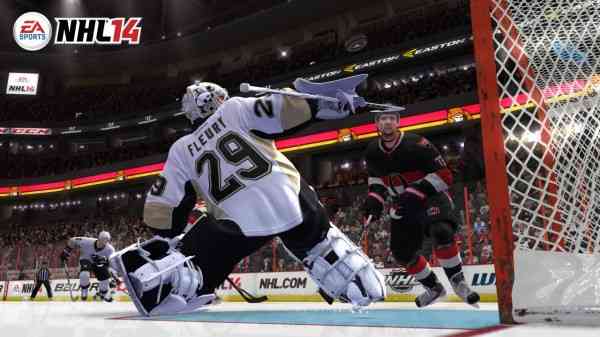 The team jerseys have added details and sharpness I’ve not seen before, and player’s faces are quite lifelike. That being, said I did notice some inconsistency of player likenesses. The premiere players have an incredible amount of detail and look entirely like their real life counterpart, unfortunately some of the other lesser known players get passed over and look quite generic. Sometimes they don’t even have a passing resemblance of themselves. The gripe is pretty minor, as the rest of the game looks absolutely fantastic from each arena, the surrounding crowd, and each home ice’s unique scoreboard and giant screen.

My biggest complaint, if you can call it that, is the play-by-play team. Gary Thorne and Bill Clement are an excellent duo by their own right as they are very capable, even though there are still huge gaps in their commentary, but I think their time has come and gone. It is time to replace them with fresh voices and fresh scripts. I’m tired of hearing how the two teams have put together “a great game to date”; usually after the second period, or how “the puck has gone over the glass ladies and gentlemen”. This stuff has been around for many years and even my wife rolls her eyes at some of what is said. Perhaps it is the repetition that annoys me; unfortunately I think it is more than that. By making the play-by-play crew regional would make it far more palatable. The West gets a different duo then the East or South, similar to the CBC broadcasts of Hockey Night in Canada that we are used to north of the border. To spice it up even more the gamers could select what duo they want for their games.

On a more positive note, NHL 14 has an excellent soundtrack including bands like Zombie Nation, Sound Garden, and Wolfmother. The song selections are awesome and can really add to the rocking atmosphere of any game. The on-ice sound effects are also just as incredible. You can hear banter from the ice and bench, and individual fans yelling displeasure or encouragement. I noticed much more resounding board effects this time around as players’ crash and bash into them; they can be thunderous and resound even after players skate away.

I went into NHL 14 thinking that EA had already hit their peak with NHL 13, but after playing the game this past week I am changing my tune. NHL 14 has once again pushed the bar once again. I appreciate how the development team really understands the particulars of the real life game as it helps to deliver another great effort.  With the advancements made to many aspects of the gameplay and aesthetics this year, both big and small, virtual hockey fans should rejoice as NHL 14 is yet another winner. Given how good this current-gen game turned out I can’t wait for the next-gen versions next year!