Q.U.B.E. Director’s Cut Review – So Much More Than Just a Portal Clone

When you first wake up in Q.U.B.E. (Quick Understanding of Block Extrusion), you’re without a memory and have no idea what’s going on. Luckily, a handy astronaut on the ISS informs you that you’re aboard an alien ship headed to Earth and only you can save the world… by solving physics puzzles. Immediately, Q.U.B.E. seems like a Portal clone with alien invasion plot device, but Q.U.B.E. manages to stand out on its own by looking fresh and delivering some really great puzzling action.

The storyline has been added into the game for the Director’s Cut and it certainly adds to the game, if it’s not a little bit obvious. The aforementioned astronaut on the ISS can only speak to you for limited periods of time before her orbit takes her out of range, so she fills you in as much as possible. As you get further, you hear another voice on your radio that tells you that it’s all a lie and you’re being tricked. They go back and forth, fighting for your sanity as you try to break the cube’s secrets. 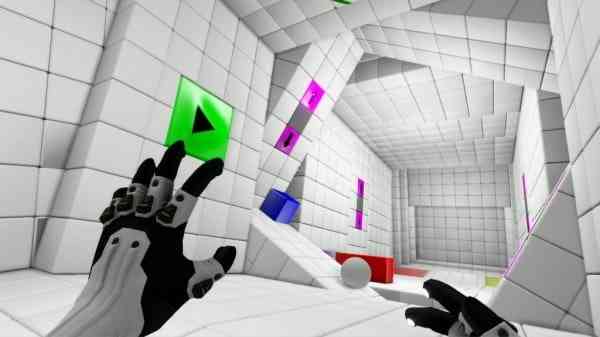 The storyline does feel a little shoehorned to be honest, but there are some great scenes where the astronaut is having issues with her own sanity as she tries to keep you from spiralling out of control from the isolation of deep space. These are put in at great spots as it helps build on the feeling of claustrophobia as you navigate tight halls or through a broken section of the cube. The addition of the slightly over the top second voice telling you not to be tricked does add a bit of mystery to the game, even if it doesn’t really affect how you play.

The gameplay to Q.U.B.E. is simple enough to explain. There are stages to complete and you accomplish this by solving the puzzles these stages. As you progress, the stages become more involved and complicated and more types of blocks become a factor. The puzzles are genuinely fun and complex enough to be challenging without spiking your blood pressure. Not to say there aren’t a couple that are truly rage quit inducing, because there are at least three, but they’re not so difficult that  you don’t go right back and try again. The game also looks real good on my PS4 which helps add to the puzzle solving fun. Couple it with a great soundtrack and Q.U.B.E. is a genuine pleasure to sit down with.

“Overall, Q.U.B.E. is a great puzzler that is both fun and challenging without delving too far into the ‘too complicated’ area that most puzzlers love to go to.”

There’s also a new feature called ‘Against the Clock’ which are time based run throughs of maps. You’re awarded medals for the best times and each map has multiple collectibles to find. So, even if you get that gold, you may have to go back and find that last hidden collectable if you’re a completion-ist like myself. This adds a couple of extra hours to the overall run time of the game and adds another layer of block manipulating enjoyment.

The downside to Q.U.B.E. is that it is incredibly short. A single sitting short. Sure, my single sitting was an extended one but the game clocks in pretty much at about 5 hours though that is all dependent on your puzzle solving abilities. It also has little replay value since once you’ve gone through it once, there really isn’t much reason to go back and play. Also, as I may have mentioned already, the storyline gives the game some more depth, but when you have to be self referential in order to make it even remotely plausible, it’s probably not really working like you’d intended.

Overall, Q.U.B.E. is a great puzzler that is both fun and challenging without delving too far into the ‘too complicated’ area that most puzzlers love to go to. There are some issues with the tacked on feel of the game and the length, but the new time trial maps add to the amount of gameplay you get. While it is short, it is also very affordable and the PSN allows for play on both PS3 and PS4 with a purchase, so that’s another big plus for the game. If you’re looking for some melon scratching and quite fun puzzle solving, this is the game for you. If you’re just looking to cheaply fill the void between Portal games, I would recommend Q.U.B.E. be one of your top picks. 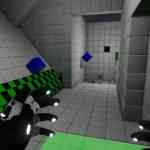 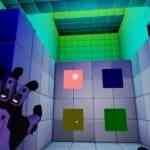 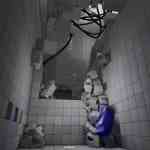