Over the past few years, many games have received the HD treatment. It’s a trend that continues with big titles like Final Fantasy VII and Gears of War, so it was a bit confusing to hear that Legend of Kay for the PS2 was being redone and re-released on current gen consoles and PC. While not a bad game for its time by any stretch, it never really did anything remarkable, so it seemed strange that developer Neon Studios decided to give it a facelift. 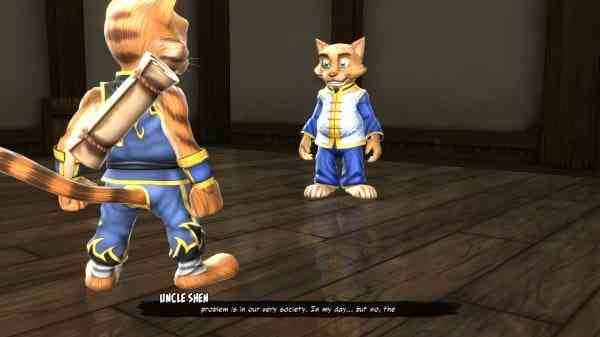 For those unfamiliar with the original, you play as Kay, a cat in a world of anthropomorphic people besieged by the gorillas and rats. As these nefarious armies spread across the once peaceful lands, it’s up to Kay to save the day using Chi and martial arts taught through the generations. You start off in the Cat Village and finish your training before setting off in search of trouble and destiny, hoping to defeat the mighty rat Tak. The story and world are both pretty straightforward, with everything unveiling in a linear fashion. A few sidequests pop up here and there but you mostly just seek out the cat statues to unlock treasure in them.

While you start with a sword, you’ll acquire two new weapons along your journey to assist you in your fight against your enemies: the claws and the hammer. You can also find upgrades for all of your weapons if you search hard enough, so make sure to find all of those cat statues whenever you can. Despite the variety, the combat can become a little dull and you’re apt to find yourself spamming certain combos or tactics over and over between dodges. It’s too bad because Legend of Kay has a great base; it just needs a few more things to add some flair to the action.

“If you have kids and want a game that you can let them play while you sit back and roll your eyes over the cheesy dialogue, pick this up. Sure, Legend of Kay Anniversary might be a bit of a cash grab by the studio, but the developers put in some hard work to make this old game shine. “

Unfortunately the combat is hindered by another factor that makes the game difficult for no reason at times: the camera. It gets stuck, it doesn’t feel intuitive, and in some fights, like against the Boarax, it just plain sucks. This is easily the worst part of the game, at least it was for me, and it became very frustrating at times. Games shouldn’t be so easy that there’s no challenge, but as a player you should always feel like it was your fault that you died, not the game’s fault. This isn’t the case here, as numerous falls or deaths were the result of the camera not behaving as it should. Neon Studios did a fine job of making Legend of Kay look much prettier, but I sincerely wish they had fixed the awful camera.

Truth be told, the game really does look good when you can get the camera to focus the way you want. New textures, models and UI make Legend of Kay Anniversary look ten times better than the original. Sure, since they didn’t rebuild from scratch it’s not going to look amazing, but if you played the original you can really see the difference. Kay’s model looks much better, though at times the shine on his eyes is a little off. Overall it’s a pretty big upgrade visually, but that’s it. 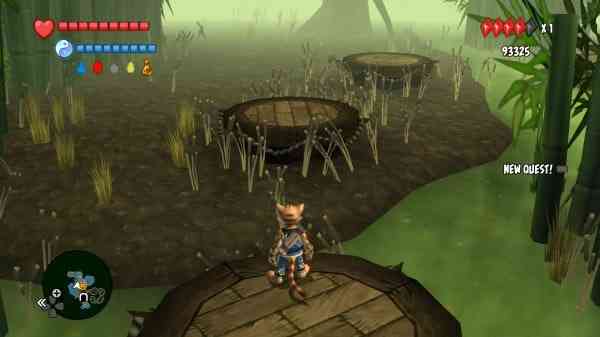 After playing it through, I just still don’t really understand why Neon Studios decided to touch this game up. When it launched in 2005, there was nothing all that special about a kid’s game that was sort of like Jak and Daxter or Crash Bandicoot. Rare had also been doing 3D “open world” platformers for years, and I’m sure for most people Legend of Kay slipped under the radar. If there’s a huge cult following, I am totally unaware and have yet to meet a giant fan. If you did like the original, then feel free to pay just over twenty dollars to relive some of your childhood or younger years with the Anniversary edition.

At the end of the day Neon Studios did a great job of beautifying Legend of Kay, and I’m sure many of the more frustrating areas are a walk in the park for those who have beaten it all the way through before. That being said, if you’re new to Legend of Kay, be warned: this is a kid’s game that will have you wanting to pull your hair out at times. If you have kids and want a game that you can let them play while you sit back and roll your eyes over the cheesy dialogue, pick this up. Sure, Legend of Kay Anniversary might be a bit of a cash grab by the studio, but the developers put in some hard work to make this old game shine.

Next Onechanbara Z2: Chaos Review – Voluptuous Sexy Women in Bikinis Can Only Take You So Far
Previous Q.U.B.E. Director’s Cut Review – So Much More Than Just a Portal Clone