I have a love/hate relationship with Supergiant Games. Alright, hate is too strong of a word, but Bastion definitely inspired some kind of loathing within me (directed both at myself and at the game) while Transistor was an ARPG tour de force in my eyes. With its slow start, Pyre almost seemed as if it were leaning towards a miss rather than a hit, but once the spark caught the tinder, it became a sizzling experience that you can’t skip out on.

In Pyre, you are a Reader, exiled to a magical purgatory called the Downside because of your illegal literacy. You are found by a trio of fellow outcasts, the first of many that you will guide to freedom through a series of trials called Rites. All of the characters in the Downside are remarkable with their eccentricities, peculiar character design, and unique voices. There is Jodariel, a former soldier shaped by her long years in the Downside into a rather sullen, but caring demon. You come across Wyrms, slithering one-eyed creatures that would be passed off as minor cannon fodder in other games but possess some of the biggest personalities in Pyre. Everyone you speak to in the Downside has their own story, and for a place said to be so desolate, it is surprisingly full of life.

“Everyone you speak to in the Downside has their own story, and for a place said to be so desolate, it is surprisingly full of life.”

While the dialogue is wonderfully written, you get a chance to select your responses far less often than I’d like, so it is mostly the characters talking at you. Pyre very helpfully supplies you with explanations when you hover over a keyword, as the story assumes you are a person who lives in this world (and doesn’t sink to the tired trope of making the player character an amnesiac). Supergiant’s world building returns to be richer than ever before as you read the Book of Rites, which outlines both legend and history, and as you explore the Downside, learning more about its inhabitants. The landscapes you and your merry band of exiles traverse aren’t just beautiful fleeting things for you to pass through; at times, it can affect your next bout of combat. The Flagging Hands is described to be a festering swamp pit so forlorn that your companions’ stats are affected — in this case, -1 Hope for everyone. And the longer you stay there, the more hits their stats will take. When you encounter forks in the road, your companions also give you advice as to what might be accomplished on each path — from running into the wandering merchant to the possibility of gathering rare items — but it is up to you to choose which is best. No matter your choice or whether you succeed or fail in the Rites, the game goes on. There are no game overs in Pyre, but your successes and failures are taken into account and reflected in the narrative. The story and combat shifts as you make critical decisions about the makeup of your party and those in the world around you. 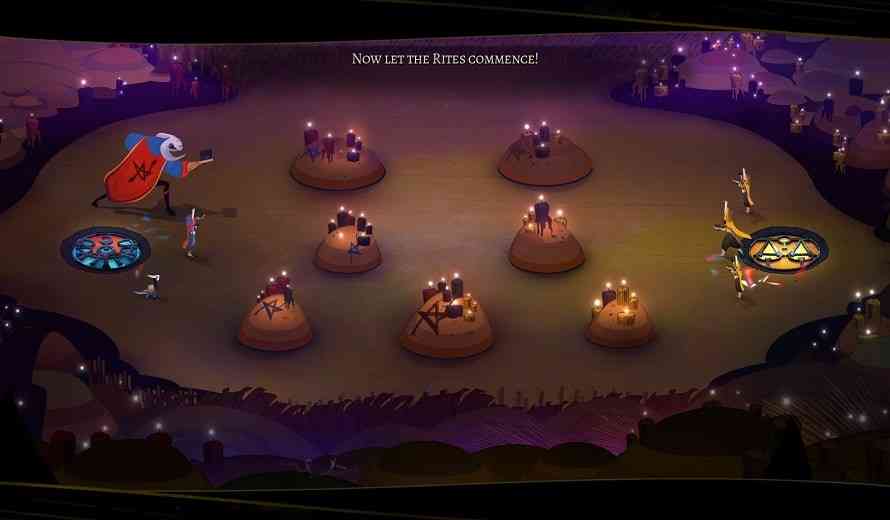 I had mixed feelings initially towards the Rite, Pyre‘s core battle system. You aren’t freely exploring a level like Bastion or Transistor, but fighting in several near identical arenas with rather effortless, repetitive combat at first. You have three of your companions take part in the ceremonial Rite, and it all sounds loftier than it actually is. There is a strange voice booming from somewhere (not unlike a sports commentator), your three companions don their robes (jerseys), and they rush towards grabbing the celestial orb (ball) and plunging it into the enemy’s pyre (basketball hoop/hockey net/etc.). There’s also some business about hurling Auras towards the enemy to attack them, and as someone who enjoys a good hockey fight and playing too aggressively in dodgeball, this was my favourite part about the combat. Now, I’m not one for sports games, but after a handful of Rites in, I was engrossed. The first few trials were too easy to get my attention, and for a while, I was only going along to get to know the characters. But as the difficulty ramps up and new characters of different races are introduced to increase the complexity of the gameplay, you eventually forget that you’re playing a weird combination of basketball, dodgeball, and Quidditch and get caught up in Pyre‘s storm.

Your companions are each of different races and have different abilities in combat. Some are slow but powerful, others are weaker but quick, some fly and cast their Auras in circles while others attack in a straight line. You will be facing off against other trios with their own mix of races, so there is some strategy in choosing the makeup of your own team. You must weigh which characters you are most familiar with against spreading experience, consider offense or defense with regard to the makeup of the enemy triumvirate. Be sure to get to know how to win with each of your companions, as some circumstances within the game’s story may force your favourites to sit out. Rukey encountered an enemy that he shared an unpleasant history with and asked to abstain, and Hedwyn once grew too seasick to fight after the team wagon crossed over a rough bit of water. Some companions refuse to fight together at all. It is necessary for you to swap between your companions, which is a wise choice by Supergiant Games as it helps in breaking up the repetitiveness of the Rites. 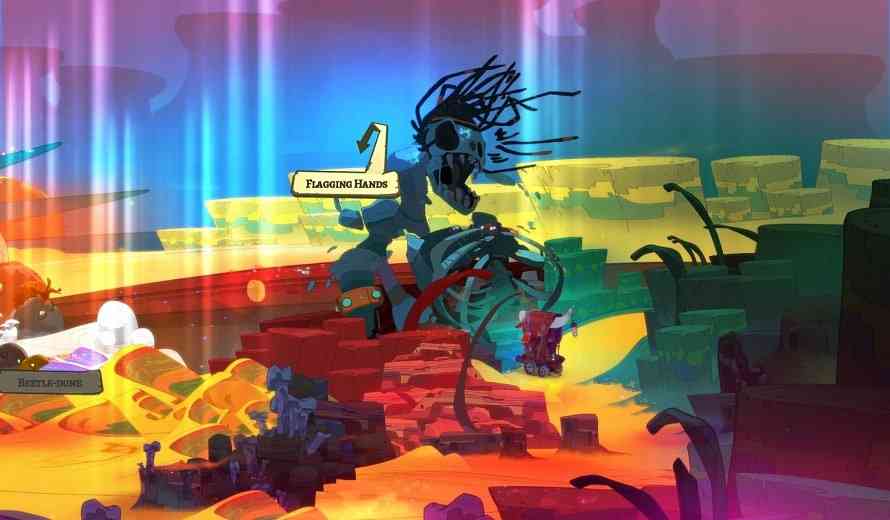 Pyre separates itself most distinctly from Bastion and Transistor as it includes a local two-player Versus Mode. You can set up customizable matches against CPUs or other players, and face specially designed challenges at your team’s home base within the campaign. Optional handicaps have also returned for the pleasure of masochists and the fury of achievement hunters everywhere (I have fond memories of the keyboard smashing the trials in Bastion and Transistor, and I’m sure there are many more to be made in Supergiant’s latest).

“The lush vistas you explore are detailed and otherworldly, still a joy when you must later retrace old steps.”

The art of Pyre is unlike anything I have seen before in a video game, with its fine lines, wide-ranging palette, and incredible colour blending. The lush vistas you explore are detailed and otherworldly, still a joy when you must later retrace old steps. The high level of polish that has become expected of Supergiant has returned with the many wonderful details in the game — the text of a forbidden book you are asked to read shimmers gold as you hover over it, the wagon your team rides in becomes filled to bursting with interactable souvenirs collected from all over the Downside. And although it doesn’t surpass the almost unfair heights of the Narrator in Bastion, the voice acting is excellent as usual.

After a bumpy start with its combat, Pyre lives up to its predecessors with its rich lore, stunning art design, and interactive narrative. With the choices that you carry out altering the story, Pyre‘s diverse cast of characters in such an imaginative world makes it one to return to after you beat it, possibly again and again.