The music begins to thunder in your head. Your shotgun is pumped and ready – no wasted reload times here. Demons and other hellish monsters are beginning to descend upon you. What more could you ask for? A grin cracks across your face as you take aim and prepare for frantic carnage… Wait, it’s not DOOM? Project Warlock might not be at the top of your list of games to snag this year but if you are a fan of first-person shooters it definitely needs to be on your radar. Notable for a number of reasons, we can’t even begin to talk about Project Warlock without bringing up that it was designed by a single 18-year-old while attending high school. Inspired by classics like DOOM and Heretic, Project Warlock is truly a fantastic homage to the source material and an absolute joy to play.

You’ll take on the role of a nameless warlock setting out to destroy evil. The narrative is thin (much like that of the inspirational material) but you’ll have a central hub between missions to upgrade weapons and spells, unlock perks, and select your next area. Stages are brilliantly designed ranging from wide open, massive killboxes to tight narrow corridors where an enemy could be lurking at any moment. Project Warlock also features secrets in the form of hidden doors and breakable walls that prove challenging to find but not insurmountable if you know what to look for. I found myself clearing every enemy from a level, finding the exit, and backtracking to find the hidden walls as a reward after surviving the onslaught.

In keeping with the nostalgic feel of the game, Project Warlock has a number of graphical modifiers that can be applied at any time, going so far as to make the game seem like it is on a CRT, extra pixeled, and an impressive host of modified sliders to give yourself whatever nostalgic feel you are going for. The menu even has an option to lock the y-axis which immediately sets the game to play more like the original DOOM than ever before. In very few instances did I need to turn it off for some precision aiming, otherwise it was a blast to play through this incredibly fresh take on the games that defined the genre.

You can tell programmer Jakub Cislo was a die-hard fan of the genre as Project Warlock immediately has that same level of difficulty. You need to keep moving, you need to swap weapons, and yes you will die more than a few times while learning how best to overcome the hordes of unique enemies. The game definitely features a wide array of weapons ranging from an axe, handgun, and magic staff up to a double-barrel shotgun, minigun, and a close approximation of the BFG. Each weapon has two possible upgrades, but selecting one permanently locks out the other. This can make for some fantastic customization in your arsenal, with the SMG’s Nail Gun upgrade being one of my personal favorites. Despite the wide array of weapons, cycling through the wheel in the middle of the fray was less than ideal. Project Warlock doesn’t wait for you to make your choice, and the wheel isn’t always responsive to your selection, leaving precious seconds wasted as you try and get the right weapon. In some cases I found I had to select the weapon and then hit the quick swap button to actually switch to the new weapon rather than simply pulling out what I selected. 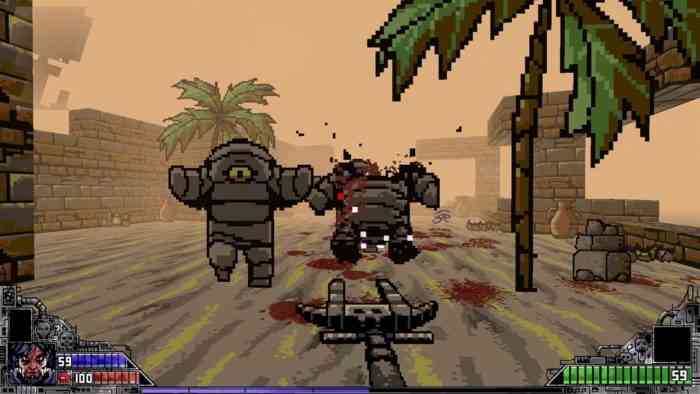 Overall my time with Project Warlock was incredibly fun. Each of the five worlds is uniquely themed with homages to other video games and movies. Boss battles are intense, and those who love to hunt for secrets can discover an iconic first-person shooter protagonist in each world with notable appearances by Serious Sam, Corvus from Heretic, Duke Nukem, Lo Wang of Shadow Warrior, and of course Doom Guy – they just all happen to be hung up and flayed. The Warlock does appear to have small amounts of dialogue in the trailer but if he speaks during the game, I never heard it. I found this a little unfortunate as it would have been a nice addition but it clearly isn’t game-breaking. There are a few minor amenities I would have liked added such as a shots fired counter considering how many bullets you’ll expend per stage. Upon completing the game you gain a level select menu but I saw no option to view based on missed secrets which is a bit of a let down for completionists. Speed runners will be happy to know the game features a toggle button for sprinting at incredible speeds (which can be upgraded to go even faster.) Stages ranged from 3 to 10 minutes for me on average but could be completed MUCH faster. 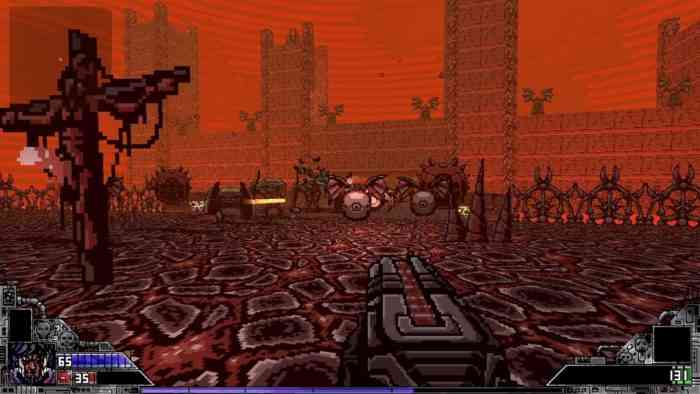 Project Warlock is the little obliterating shooter that could. Someone so inspired by classic games took their love of the genre and created a fantastic monument to the source material while still offering its own identity. Levels are designed intelligently, enemies are varied and brutal, and the plethora of weapons and spells at your disposal is impressive for what the game is. Other than the unfortunately clunky weapon wheel when in the thick of combat and a few minor omissions I would have liked to see added, Project Warlock is one hell of a shooter and a great way to shut off your brain and just have some classic fun. It’s fast-paced, intense, and keeps you on your toes. Here’s hoping Jakub Cislo has plans for a sequel.

*Xbox One code provided by the publisher* 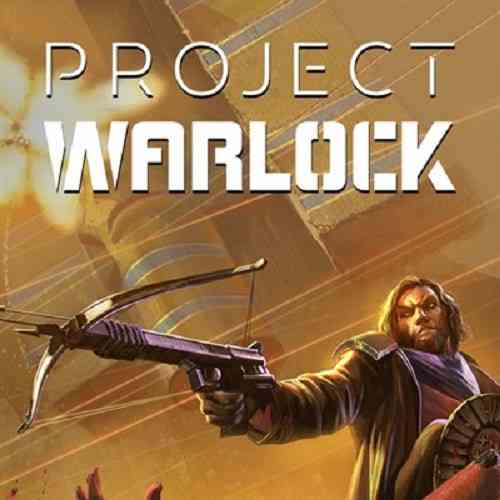