Atomicrops is almost what you’d get if you crossed Stardew Valley with Enter the Gungeon. You cultivate your land and plant crops that hum and sing as they sprout. You acquire farm animals to roam around your untamed pasture overwhelmed with weeds. You can marry a partner, or two, if polygamy is your thing. It sounds like a nicely painted picture, but in reality, this seemingly peaceful farming sim is anything but. In its truest form, it’s a twin-stick shooter with roguelite elements that has you tending a fertile plot of land in the center of a post-apocalyptic wasteland. You must grow enough food to feed an entire town while hostile mutant creatures try to stop you at every moment. It’s a chaotic and challenging genre mashup that defies all expectations, and it’s a bullet hell nightmare I never want to wake up from.

Another Day on the Farm

Your progress in Atomicrops is marked by seasons, composed of three consecutive days and nights. Peashooter in hand, you must survive the parade of bullets fired at you by mole-like critters during the day and protect your crops from waves of slugs and mutant bunnies at night. After each night, you will be helicoptered out to the nearby town to earn money for your harvest, and you will also be able to purchase new guns, upgrades, and health. You can even use this time to court the town singles with roses you’ve grown. At the end of each season, you will encounter a formidable boss battle that will test your skills on top of the brutal waves of enemies. Survive this, and the mayor will shower you with gifts and rewards depending on how well you’ve fed the town that season. If you lose all of your lives at any point, however, your run will end and you’ll be sent to the very beginning.

Survival may sound as simple as dodging bullets all day, but there’s a delicate balance that must be struck in order to achieve it that gives the game its brilliant edge. You won’t survive the later rounds unless you buy better guns, but you need to grow crops in order to make money. The only way to obtain a substantial amount of seeds is to wander into enemy camps and fight for them, but wander for too long, and you’ll find your day ending before you can successfully grow and harvest anything. It’s a constant give-and-take between exploring and farming that forces you to strategize every single day in order to maximize your time and your harvests. 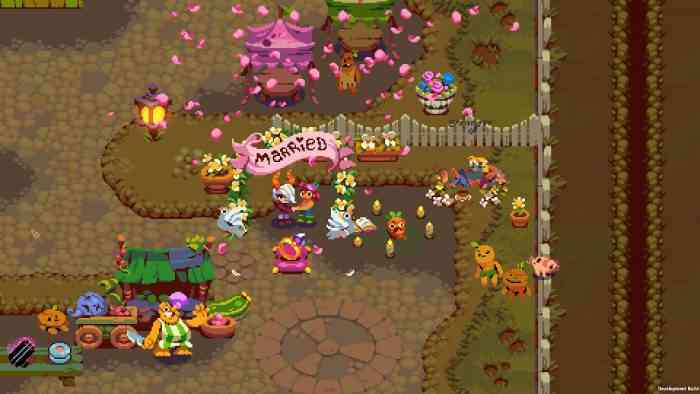 Exploring enemy camps is not only the best way to find seeds, but also to acquire roses, farm animals, and protective turrets and scarecrows, all of which are vital components necessary for survival. Enemy camps surround your farm in each cardinal direction, all with their own individual themes and whimsical songs to match. To the west, you’ll find a desert frontier with enemy cactuses and crabs with oil barrels for shells. Go south, and there’s a verdant jungle overrun with roaring panthers and evil chameleons. All enemies have their own movement and bullet patterns that make raiding an extremely dangerous task, but the risks are just as great as the rewards. Loot different pockets of the procedurally generated enemy camps, and you’ll find anything from single-use farming spells to items and perks that last your entire run, such as cleats that till soil as you run across it or the ability to unearth a friendly root soldier for every crop you harvest.

The animals you can bring back to your farm are one of the most enjoyable elements of the game. Cows, pigs, chickens and bees are all scattered across different enemy camps, and each have their own helpful functions. Chickens will eradicate weeds, dig up fertilizer and lay eggs that can be sold as part of your harvest. Cows will water your plants, which allows you to leave the farm to explore without sacrificing the growth of your crops. Your animals also adopt the same power-ups that you do, which adds an exciting and dynamic twist to the gameplay. If you acquire the ability to zap closeby enemies with electricity when you are watering plants, your cows will automatically match this ability. Layering perks on to your farm animals means that potentially, you can have a herd of chickens that pull weeds and exert a concussive blast against nearby enemies, or build an army of water-zapping cows. It’s a complete riot watching your animals passively damaging enemies around you, and it’s fun to see the different shenanigans that transpire organically throughout the game. 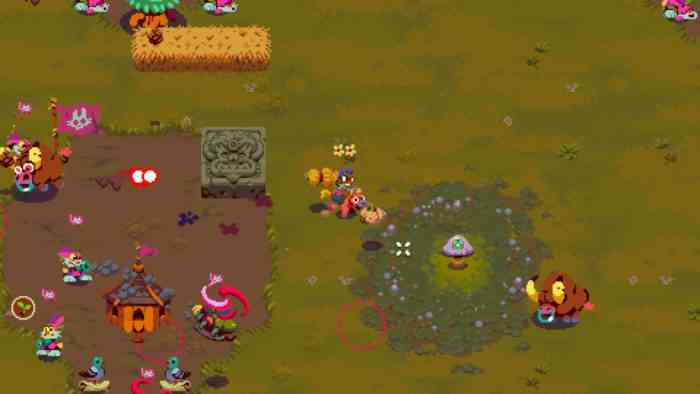 Though this review corresponds to the PC version of Atomicrops, I did also check out the game on the Nintendo Switch and noticed significant differences. The gameplay mechanics are delightfully easy to pick up on PC, and the controls feel very natural with a mouse and keyboard. I personally stumble when playing with a controller, mainly because cycling through different items in real time feels much slower using the triggers or pushing down on the joysticks, and the game’s pace is such that every second is crucial. I also have a hard time getting on board with the lack of accuracy that controllers adjust for. With mouse and keyboard, you can aim down to the exact square on your plot of land from extremely far away, which is almost imperative in later rounds when you can’t afford to stop moving for a second. Controllers, however, take away this aiming accuracy and force you to stand right next to every square in order to complete an action, often putting you much too close to danger. If you are deciding between playing the game on your PC or on the controller-only platform of your choice, it is important to note that you could experience more frustrations with the controls on a console.

Another difference to keep in mind between the PC and console versions is the stark difference in performance. I never encountered a lag on my PC, but found the Switch version to have noticeable performance issues, including frequent frame rate drops and terribly long loading screens. None of these issues were dealbreakers, though I do suggest playing on a computer if you have the option. If your only available platform is a console, just don’t expect a seamless performance, and prepare yourself for the heightened difficulty that comes with using a controller and losing out on the accuracy.

Atomicrops on PC brings a polished experience that’s been painstakingly updated since its Early Access release. The music and sound design is wonderfully composed, the mutant enemies are quirky and distinct, and the eccentric bosses ramp up appropriately from one to the next. One season, you’ll be fighting against an angry, anthropomorphic sun setting fires to your crop fields, and the next you’ll be dodging the tires of a vengeful tractor named Old Mech-Donald. It’s hilarious, endearing, and so engaging that you’ll demand another try after every failed attempt. 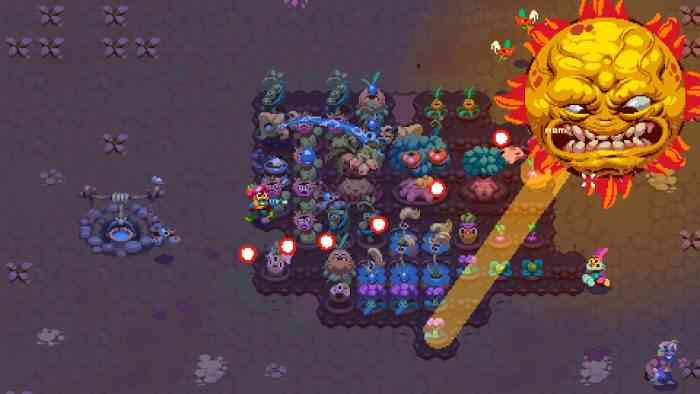 Since I previewed the game last September, I haven’t been able to put it down, and I’ve witnessed every major change and update that’s been implemented along the way. One complaint I have about the newly released full version is that after you survive your first year, the gameplay and bosses repeat, only on a higher difficulty. Within that year of gameplay, however, there’s definitely something to be said about the sheer amount of content to discover . Evidently, I’ve clocked over 150 hours of play, and I’m still finding new rewards, perks and permanent upgrades. Though it may seem unforgiving to start you at the complete beginning each time you lose, there are many permanent upgrades and unlockables that give you an upper hand for your next run, and the more you play and advance, the more forgiving the rewards get. It’s an impressive method to keep you coming back for more, and it gives the challenging game a healthy, approachable nature.

Despite a few nitpicks, Atomicrops is, in many ways, is a superb experience. It’s a harmonious blend between completely unique ideas and straightforward, simple mechanics. It’s tough as nails, but not discouragingly punishing. It doesn’t overwhelm the player with a surfeit of nuances to learn, yet it offers enough perks and gameplay modifiers to keep you always stumbling upon something new. For an indie title that seeks to present physical challenge and old-school, arcade thrill in place of a meaningful narrative, it accomplishes its mission beautifully. If this were a true arcade game, I’d have spent all my quarters long, long ago. 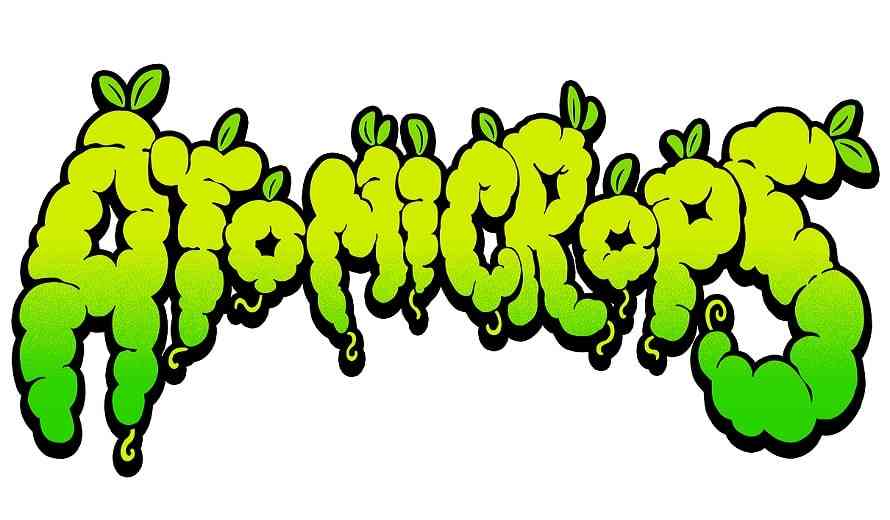