It’s been quite a long time since I last sat down to play a game I wasn’t excited for. In most cases, I usually get the next offering in a series that I’ve followed most all my life or I buy a game that is an impressive new showing of graphical prowess and a gameplay marvel. In regards to Professor Layton and the Azran Legacy, I have never played any of the previous games simply because I buried my head in the sand and neglected playing them. It wasn’t even good sand; it was that gross stuff that has slimy seaweed and broken shell pieces everywhere. With this in mind I ask you a question: “Have you ever been wrong before?” I have, and I’ve been ignorant at times too, that’s the thing with not knowing, you fly to assumptions that most always end up being wrong.

In my mind, Professor Layton had always been that boring point and click adventure with a few puzzles thrown in here and there, reminiscent of the $1 computer game shelf at your local drug store. For anyone like me, who has gone on without so much as a bat of an eyelash towards these mobile morsels, Professor Layton is a story heavy puzzle game that has you investigating scenery and solving mysteries. Simple enough, yes?  Good, because that’s it. That’s the game in a nutshell, and putting my bias aside, I realized something; it’s a VERY good game. Not unlike anything else, one should try before we judge. The fun comes from its simplicity. I found myself setting my 3DSXL down in front of me on the couch, tea in one hand, stylus in the other, and diving in. The entire game can be played hands free, which lends itself to the relaxing and immersive nature of the game. And aside from the occasional mind-bending puzzle, it does a really good job staying that way. 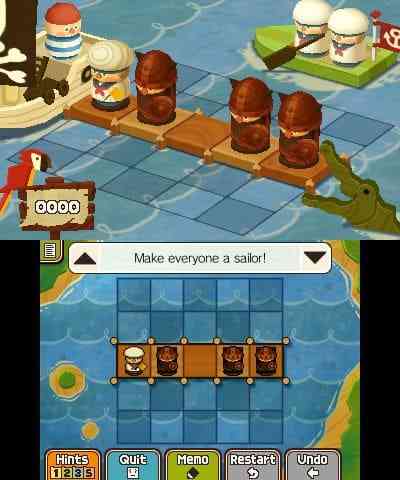 It’s fair to say that a puzzle game wouldn’t be very good if it didn’t have a few different kinds of puzzles. That would be like a fighting game that had you brawl the same guy over and over, boring. Arzan Legacy has you covered with something in the neighborhood of 150 odd puzzles, most of which are completely different from one another; however, the more you search and nose around the more you may find sequels to puzzles that have been remixed to be more difficult than the originals. Some puzzles are image based, some involve numbers, while others involve moving pieces strategically around on a board. All of the bases seem to be hit. Variety certainly seems to be key here. In addition to the core puzzles, every so often you’ll find yourself faced with an interview style conversation with your allies who will test you on how well you’ve been following the plot. It is presented in a multiple choice format that has you picking one of three answers. While I personally didn’t find any specific “wrong” answers, there are certainly answers that aren’t correct. In those situations, I simply chose another answer to proceed.

Navigation through the game is quite simple. The bottom screen is a map and explorable locations are represented by an orange node. After a location has been selected you are free to glide your magnifying glass shaped cursor around the scene, gathering goodies, seeking out puzzles to solve, and collecting clues to further your quest. When viewed in 2D, each individual environment appears to be a well-drawn and wonderfully colored image, but when 3D is activated so much more is revealed. Many parts of each scene move around dynamically depending on where in the area you are looking and you’ll find that many more parts, while seemingly pointless, are interactive to the touch. Whether they be birds or man-hole covers, details can be found everywhere if you look closely. 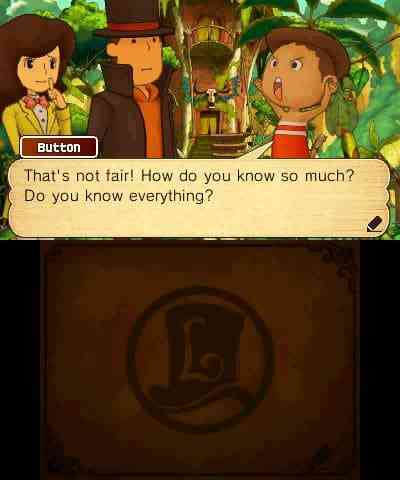 Being new to something comes with a few minor hitches. You can never really be sure what to expect, especially when you get your first go on said something’s sixth iteration. What set me back was the inclusion of some very fun and very addicting mini-games. There are three in total, but as you progress through the game more becomes available for each. They are all, not unlike the game itself, simple in design, but engaging and addictive. And, naturally they are mostly puzzle based. The first is a dress up game where various characters that you meet throughout your journey will request put together the perfect outfit, and naturally, for each new request the definition of ‘perfect’ will change. Clothes are categorized into five different types, such as cute or trendy and it’s your job to find the winning combo. The second type of mini-game is a ball rolling game, more specifically, nut rolling. An adorable little squirrel wants to see his nut rolled to safety, which is marked by a little tent type thing on the course. Each course is littered with hazards like pitfalls and walls that have to be avoided or managed using various tools at your disposal. The third mini-game is a gardening game that tasks you with planting flowers to make a garden happy again. Each different colored flower sends off an energy pulse in a different manor and these pulses will hit wilted trees and shock them back to life. Rejuvenating the whole garden in one swoop will net you a win. All these mini-games are fun and quite addictive, or at least that is how I found them.

I often get the feeling that in this day and age most people, at least the type that consider themselves “serious gamers”, generally scoff at the idea of a puzzle game; a point and click puzzle game no less. I should know, I was one of them. What was evident during the hours upon hours I played it only took hour at the beginning of the game to make me realize that I may have put my words in places they had no business being. Professor Layton and the Azran Legacy, is a great, even perspective changing game that showed me that games don’t need endless action to be fun. I would even place this game akin to picking up and reading a good book. It’s a great layback and enjoy yourself type of experience that certainly showed me, in the words of the Professor himself, that puzzle solving is a gentlemanly pursuit.