PowerA Spectra Illuminated Controller Review – Perfect for the Kids, Not So Much For Serious Gamers

Ever since I started writing reviews some 10-years or so ago, I’ve had the opportunity to play around with a variety of “novelty controllers”. The Batman Batarang Controller and the Mad Catz Ghost Recon controller are just two that come to mind. I call them novelty as there is nothing professional about them. You’ll never see these controllers on the Major League Gaming circuit. They are perfect controllers for under the tree or that special someone who wants something a little more than just a boring black controller.

Over the past week, I had the opportunity to check out PowerA’s Spectra Illuminated Controller for the Xbox One. For $49.99 this controller is just a tad cheaper than your standard Xbox One controller. The big selling point is that they light up with a possible 225 light-up color combinations. On the surface, it’s a slick looking controller but it’s certainly not for everyone and not for those looking to play any games online with their friends.

The fact the Spectra controller doesn’t support Xbox One accessories (i.e. a headset with a mic) is quite easily the biggest drawback. Not being able to use my headset is a big problem as I play most of my games online. Whether it be a game of Destiny, Advanced Warfare or Madden, having a headset is critical for me and I know I am not the only one where this little omission would be a deal breaker for many. So needless to say the Spectra controller left an initial bad impression.

My second issue is that this controller is wired. Sure you don’t have to use batteries so that is a big plus. My controller’s burn through batteries like my Uncle Bill goes through Cigarillo’s. Not having to worry about recharging or constantly having a fresh pair of batteries on hand is a bonus. Regardless I prefer wireless. My couch sits some 12-feet back from the TV so the 9.8-foot cord is too small for my set up. I recognize 10-foot long controller cables seem to the industry standard but it’s just too damn short my liking. So already I was a little irritated I needed to push my oversized couch closer to the Xbox One. 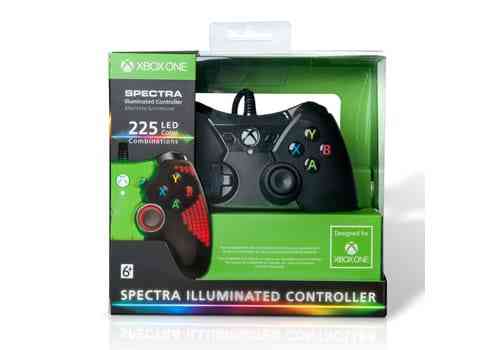 The PowerA Spectra controller is light weight which can obviously be attributed to the lack of a battery pack. Regardless it feels light which would be good during some of those long play sessions. The controller itself has a sharp looking design, very similar to the Xbox One controllers. It doesn’t look or feel cheap at all. All of the buttons, the bumper, thumb sticks and the d-pad all feel great with no real concerns. The rumble motors don’t feel quite like they do on my Xbox One controller but they are effective nonetheless. The controller is sturdy and well built too. I am not a “controller expert” by any means, but there have been occasions in the past where I have picked up third party controllers and it just looked and felt cheap. This is not the case with the PowerA Spectra Illuminated Controller.

As I mentioned this sucker lights up which, initially, is a bit of a distraction. For the first ten minutes or so I was constantly looking down as I was playing but eventually I settled in and was able to just ignore those pretty LED lights. There are three buttons on the back of the controller that change the brightness settings, the illumination spots on the controller, turn on the lights and you can also change the colour cycle. There are over 225 light-up color combinations, 15 different LED colors, 2 separate light up areas, 3 operational modes and 4 brightness settings. All in all the lighting options are pretty cool and there is no doubt any younger gamer will be impressed. In the dark the controller looks very next gen.

For the price, the PowerA Spectra Illuminated Controller is not a bad bang for the buck but it comes with one massive drawback. The lack of an input for an Xbox One headset and microphone is massive let down and one that will ultimately have me packing this controller right back in the box it came in. Not to mention it is wired and the cable is too short for my current gaming set-up. This being said, the Spectra controller is well built and the colour combinations are pretty cool. Younger gamers who do not venture online may like this controller for all its majestic LED lights.

Next Pinball FX 2 : South Park Tables – Hey Mr. Hankey, How the Hell Did you Get into this Pinball Game?
Previous Fantasy Life Review – From a Paladin to a Tailor, You Can Do it All