Going into Power Rangers Super Megaforce I didn’t have a lot of expectations. I know this is a game designed for children, and I knew that I’d have to go into it with the right mindset. This won’t be a game that I’ll spend 90 hours on and it won’t be a game with an intricate and expansive stat and battle system; but it should be a fun little beat-em up game with a Power Rangers theme. So when I booted up the game for the first time my mindset was to play a game that wasn’t designed for a gamer like me; and even with that in mind I was still disappointed.

To start the game you choose which two rangers you want to play as.  The point here is that the characters you pick level up, and in each level you can change characters. I chose to stick with the blue and pink rangers. Initially you have a small group to choose from, but more unlock as you go through the game and there are quite a few. I found it helps to use the same ones as often as you can to get their power up. This is a neat little system that gives a connection to your Power Rangers as you play them more.

The gameplay of Super Megaforce is incredibly repetitive, even for a children’s game. Each level is essentially a 2.5D sidescroller going left to right, and you run forward until a group of enemies appear. At this point you use your three attacks, a long ranged attack, a close ranged attack and a charged attack, to kill them. Once all the enemies are dead you keep going until the next wave. Then rinse and repeat. This is almost every single level, with each world just having a different backdrop.  The first few levels are fun enough, running around as any color Power Ranger you want beating up bad guys. By about the fourth level though you realize that the entire game is that same formula, and it loses any amount of fun it had. 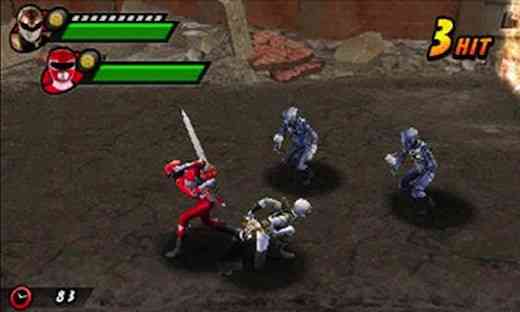 The controls are sort of clunky even though you only run and attack left or right, not up or down. The attacks are simple, which is good for a younger audience because there is no memorizing of combos. Even on the hardest difficulty this game is a breeze, I can’t imagine even the target audience, those diehard Power Ranger fans, being challenged to kill the enemies.

You can collect coins in each level to buy things from an in-game shop. This is something I thought would be sort of cool. It was my hope that being able to buy new weapons or new characters might make things a little more interesting. The only thing you can buy are healing items at the start, which isn’t very interesting. Eventually you unlock the ability to buy a level up for a character, which seems sort of “cheaty” to me. The store just didn’t do anything to make the game better.

The one change in the formula for each level is that once in a while you get to play as a giant robot to fight a boss; however, these robot levels are almost as boring as the other levels. You have three attacks as you can tap on the touch screen to hit the enemy, who stands across from you. These levels are really easy, but they do offer a nice change of pace from the exact same thing the rest of the game is (hey, there is a bit of a silver lining if you look right?) 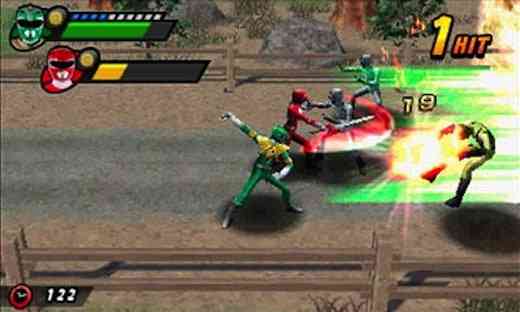 The visual for Super Megaforce are what you would expect from a 3DS game. Sure, it’s not the best looking game on the system, but it’s not bad either. Each world has a different theme to it. For example, World 1 is a city and world 2 is a volcano. I found that the levels within each world become monotonous and get old after just a few levels. It is the monotony that has you waiting for a quick change of scenery; and visually they do manage to change it up. The variation in worlds is very cool, but the levels are too similar to stay interesting for a long period of time. This is sort of a nit-picky criticism though as the backbone of the game is obviously the gameplay, and the levels are simply a backdrop without any real interaction with the player.  On a side note, Super Megaforce does not utilize the 3D feature of the 3DS.

The music fits the it pretty well but it’s nothing special. The theme song on the title screen is awesome, especially for fans of the show.  During the gameplay, where the music has to count for something, it plays a pretty generic adventure–like pump-up song, which changes when you fight enemies. The battle song keeps the energy high but the transition in and out of it isn’t very seamless.  In regards to the sound effects, your Rangers make a really annoying noise when they attack. Each attack has a different grunt, but when you have only three attacks you’re hearing that same grunt over and over and over again it gets on your nerves.  As there is no voice acting, players will have to be able to read, but that’s ok, as the story doesn’t really seem to influence the game much.  Not being able to read is not a huge detriment to being able to play this game, all you have to do is mash buttons and kill bad guys.

Overall this Power Rangers Super Megaforce does not really do much right. Even for young fans of Power Rangers I don’t think Super Megaforce can keep them entertained. The lack of diversity and challenge is boring and the level design doesn’t do anything to help the gameplay. The shop system could have been a small redeeming factor but it turns out to be pointless. If you’re still looking for a silver lining, Megaforce does have interesting variation between worlds, not the levels, and the diverse cast of Power Rangers means you can switch it up and play all your favorite characters, but this isn’t enough to save the game.

Next Captain Toad: Treasure Tracker Review – That Loveable Toad Finally Gets His Own Game
Previous Far Cry 4 Review – Liberate Kyrat While Riding an Elephant… So Much Win