Captain Toad: Treasure Tracker Review – That Loveable Toad Finally Gets His Own Game

Super Mario 3D World was my 2013 choice for Game of the Year, and with good reason. Featuring incredibly clever level design, beautiful and colourful graphics, and amazing power ups on top of all this awesomeness, the occasional puzzle map appeared in various levels featuring the brave and adventurous Captain Toad. These 3D mazes were a delight to play, but they were far too short and I found myself wanting more. I recall commenting back then about how fantastic it would be if Captain Toad had his own game. Well thankfully Nintendo thought the same, and nearly a year after the release of Super Mario 3D World Captain Toad: Treasure Tracker makes it’s way to the Wii U console just in time for the holidays.

Rather than the Mario 3 style map used in Super Mario 3D World, Treasure Tracker uses a storybook to tell its tale, with each page revealing a new level to complete. Along with his adorable side kick, the pink hued Toadette, Captain Toad sets forth to find a much coveted treasure, The Power Star. They start their adventure together, finding the star, but in the midst of their celebration Wingo, a giant bird whisks away not only the Power Star, but poor Toadette as well, who is desperately clinging to it as he flies away. This sets the stage for Captain Toad to make his way through numerous locations filled with dangerous enemies and challenging obstacles in a quest to rescue his dear companion and to get his treasure back.

The controls are quite simple, the left stick is used to move Captain Toad throughout the stage and the right stick is used to move the game camera. Rotating the stage itself is essential for finding hidden treasures and the path to the end. Captain Toad can’t jump either and he is armed only with a headlamp. He’s not really a force to be reckoned with when facing off against the barrage of enemies, mostly using wit and stealth while also being able to fall off a platform to stomp on an enemies head or scootg up a ladder in the nick of time. However, paying tribute to Super Mario 2, there are turnips to be found within the stages that can be plucked from the ground and can be thrown to defeat the numerous Shy Guys, Hammer Bros., and Magikoopas harassing him as he makes his way to the star. 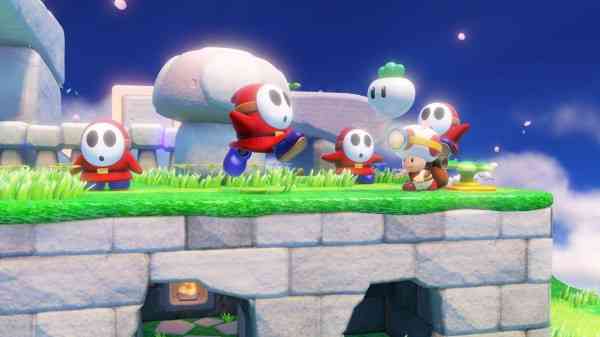 Super Mario 3D World amazed me with its clever level design and the 3D puzzle levels in Treasure Tracker follow suit. There is no shortage of creativity as each stage is expertly crafted with challenging puzzles. While many locations felt familiar, such as a haunted house reminiscent of Luigi’s Mansion or Beep Block Plaza, a personal favourite from Super Mario 3D World, each stage is truly unique.  A water park filled with Goombas floating around in little life preservers, a train speeding through a blizzard, running away from a great dragon and his fiery breath, and even a mine cart rushing though the level on rails, each stage is a joy to play through.

The level designers seemingly use every gimmick from the Mario series, which isn’t a bad thing.  Buttons to raise or lower the level revealing hidden secrets, cannons to shoot your enemies from afar, pipes to send you soaring into the air, double cherries to clone Captain Toad, even blowing into the Gamepad to raise a platform. There is a lot of reliance on the touch screen too, including such things as pushing and pulling platforms with your stylus or using the screen to turn a knob. The latter is a game mechanic that is used quite often, and it did become somewhat tiresome. There were a also few instances with the camera at times where I couldn’t see what was happening despite moving the right stick for a better view; a bit of a nuisance but not something that raised its head a lot. I think I may have fell into a pit of lava as a result, it really could have been my own stupidity, but it’s nothing that I felt really took away from the gameplay. 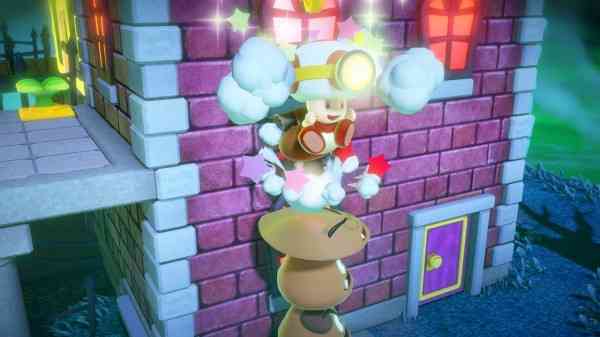 The goal within each level is quite simple; make your way to the end to get the power star. You can breeze through each level within minutes and finish simply by collecting each star, but that won’t get you very far later on. Remember the stars in Super Mario 3D World, and how you needed to collect a certain number to advance to higher levels? Well, that same concept is back in Treasure Tracker. Within each level there are 3 purple gems to collect, either in plain sight, buried in the ground, or found in an enemy. As the story progresses you will need a number of these gems to unlock further chapters, and no doubt you will find yourself replaying a page a couple times to get all the gems. Adding to the replay value are bonus objectives, such as clearing a level using only 3 switches, or collecting 100 coins, which oddly enough are only revealed after you’ve first completed the stage.

I wouldn’t say that Treasure Tracker is extremely challenging, but there is a fair bit of strategy involved and it does get increasingly difficult as the game progresses. That being said, it’s simple enough to play that even the younger members in the house will enjoy Toad’s adventures. Should you find yourself dying too frequently, an invincibility mushroom appears at the beginning of the stage, allowing you to breeze past those pesky Goombas, a very welcome addition for those who find themselves frustrated. I didn’t hesitate to use them when they were available, and I feel no shame for doing so. After all, it’s not really about defeating enemies, but about discovering the path and solving the puzzles to get to the star. 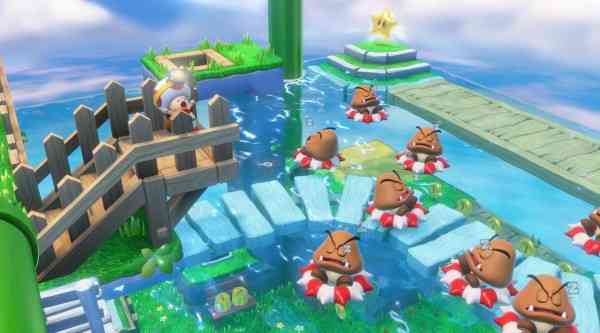 The soundtrack is filled with cheerful and upbeat sounds and familiar themes, and much like Super Mario 3D World, Treasure Tracker looks absolutely fantastic. Colourful and happy HD graphics made up of a palette of bright, bold, and vibrant colours fill your screen. You’ll find many beautiful environments filled with adorable enemies, a staple in any game from the Mario universe. We only have one TV in our home, so I played quite a bit on the Gamepad, and I’m happy to report it was just as enjoyable off-TV as it is on the big screen.

I admit at first I was a bit concerned that there would not be enough content for the price tag. It’s a single player only game, and I panicked a bit after I finished the first of Captain’s Toad storybook and I saw the credits rolls after under 2 hours, but then that darn Wingo did it again, this time leaving Toadette to fend for herself with tougher challenges and facing off against even tougher enemies. There are over 70 stages to complete, and with the bonus objectives Treasure Tracker offers great replay value. Add to the mix special coin rush stages, appearing as bookmarks and there is more to do. These are quite similar to a mushroom house on the map in Super Mario 3D World in which you use a special pickaxe to rapidly mine for coins or use double cherries to duplicate Toad up to 5 times to collect as many coins as possible before time is up. There was a message a few levels into the game that a Super Mario 3D World game save was detected. This gave me access to play as Captain Toad in a few bonus levels from Sprixie Kingdom. Although this is a nice addition I personally just didn’t find it that fun. Poor Captain Toad is slow, he can’t jump, and he can’t use any of the special power ups (no Cat Captain Toad).

While I highly recommend it, you don’t need to play Super Mario 3D World to fully enjoy Captain Toad: Treasure Tracker as it truly stands out as it’s own game. With addictive 3D puzzles that will certainly challenge the long time Mario fan and bright, colourful graphics and cute characters that will surely appeal to the young ones, there’s something to offer for all audiences. Some of the game mechanics and gimmicks may grow a bit tiresome after awhile, but the clever level design, bonus objectives and unique puzzles make this yet another fantastic title for Wii U owners to add to their collection.