I recently wrote a preview for This War of Mine in which I referred to it as an Empathy Simulator. Like Cart Life and Papers Please, these games aren’t meant to be “won” in the traditional sense. Their goal is rather to give you an experience and make you understand just for a moment what it must feel like to be in a tough spot. With This War of Mine having recently being released in full, I dove back in to see the full experience.

In This War of Mine you play as a group of civilians who are trapped in a war-torn city under siege. The city in this particular instance is fictional, but it’s supposed to be loosely based on the siege of Sarajevo and a few other modern conflicts. You begin with three characters under your control, each with a brief note about their backstory. From there, your goal is simple, survive. Well I suppose I should say that the goal is straightforward, because survival isn’t simple. Not at all.

In terms of basic gameplay, this War of Mine is actually quite a bit like The Sims. Each of your characters has needs and states that you need to keep an eye on. These needs include hunger, fatigue, happiness, and health. To keep everyone going you need to upgrade your shelter with beds, heating, cooking supplies, medical facilities, and anything else you can use to help survive. To get these materials, you need to send out one of your survivors every night to scavenge.

Scavenging is horribly tense every time, and it’s also the primary way This War of Mine conveys its story. Some of the places you scavenge will be empty, but in other places you’ll run into other survivors. Judging the nature of those around you is important and dangerous work. Some strangers are looking to trade, some just want company, some will want to come back to your shelter, some will be scared of you. Of course, some will be violent as well. If you look and listen carefully, you’ll notice that some are violent in a defensive manner, and some offensive. In many cases you’re the one who is trespassing, after all.

This is the kind of game where everyone will have their own experience, so for the rest of this review I’m going to share mine. In terms of gameplay I found This War of Mine a little tedious and slow. I mostly wanted to hustle through the gameplay parts so I could see the story and my characters develop. It’s not an amazing GAME, but it’s an amazing experience. Now, here’s how my experience went:

I had Bruno, Katia, and Pavle. Bruno was a good cook, Katia was good at bartering, and Pavle could run fast. I quickly set up a rotation where Pavel and Katia would sleep during the day while Bruno cooked, and at night Pavle would scavenge with Katia on guard while Bruno slept. Eventually I picked up another survivor called Marin. He was a handyman, so I really had a nice complement of people working together. There were times when we were low on food or needed more bandages (both extremely valuable items in trade), but overall we were making it by. That all changed one night. 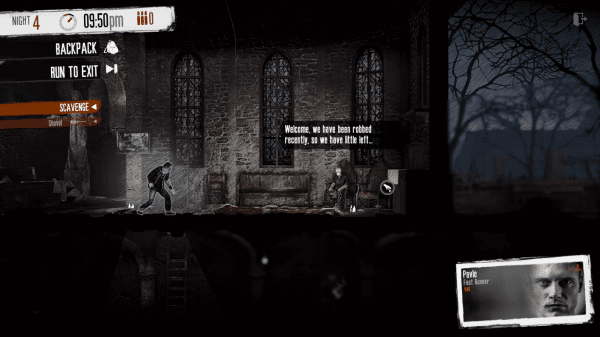 Pavle went out to a quiet house at night looking for goods. While scavenging the front room, an elderly man walked in from the main room of the house. He was startled by Pavle (me), but kept his calm and said there wasn’t much left in the house and his wife was ill. You don’t really get the chance to respond to the strangers, so I walked past him further into the house. I saw his wife sitting in an armchair. She saw me too. The old man screamed “Jane! RUN! RUN!!!!!” at which point the elderly woman tore off away from me and up the stairs. The old man tossed a couple feeble threats/pleas in my direction before running up the stairs himself. Pavle didn’t mean to scare them. I didn’t mean to scare them. I just needed goods to survive. In their fridge were some canned goods I badly needed, which I took. As I left the house I saw them huddled together in the bathroom. The elderly man was trying to calm down his wife and tell her everything was going to be okay.

Pavle wasn’t the same after that, and neither was I. He slept poorly for several nights and his downtrodden attitude affected the others. After time things picked up and we actually got back into a groove. In fact, we were pretty well stocked in the food department after a couple deft trades by Katia. Pavle (and I) decided to go back to the house to put some food back in the elderly couple’s fridge. Unfortunately our home had been raided the evening prior (which can happen occasionally) and Bruno had been wounded. The only place I knew to get meds was a VERY dangerous apartment crawling with murderers and kidnappers. Pavle had been there before and he didn’t want to go back. In fact, he had to kill one of the bandits once in order to escape. He also thought he heard cries for help through a doorway, but he didn’t have the tools to open the door so he had to leave. 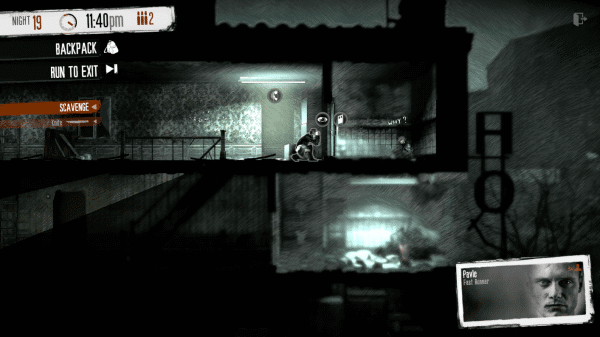 Now he was going back there, because his friend needed the bandages. He snuck in deftly and managed to grab some goods. Unfortunately the medecine cabinet was more difficult to reach. He made some noise in another part of the house to lure away the bandits and made a break for the cabinet. BINGO! A couple bandages. Pavle didn’t want to stick around, and I didn’t want him to risk looking around for anything else. So we made a break for the exit. We opened the door to the stairwell and BAM!….Pavle saw no more….

The next day Katia made the trip to the quiet house to tie up the loose end left by her deceased friend Pavle. She crept into the kitchen and heard nothing. Passing the fridge she went upstairs to see who was home. The elderly woman was nowhere to be seen, but the elderly man was there….motionless in his bed, long since departed. Katia placed some food in the fridge on her way out. No one went back to the quiet house again.

Katia became the new scavenger and we picked up a new survivor, Anton. Anton was old and he came to our door already wounded. He wasn’t an asset, but he was a 4th set of hands, and we needed that. A couple nights later Katia was in an abandoned supermarket and through a keyhole she heard a military man aggressively propositioning a woman looking for supplies. She listened and watched the whole time in silence as the man went from suggestive to aggressive to hostile. It wasn’t until he clubbed the woman with the butt of his gun saying “You’re coming with me!” that she slowly opened the door. She snuck up behind the man with the shovel her friend Pavle had used so many times to dig through rubble, and she brought it down upon his head. She had taken a life, but she had saved another. 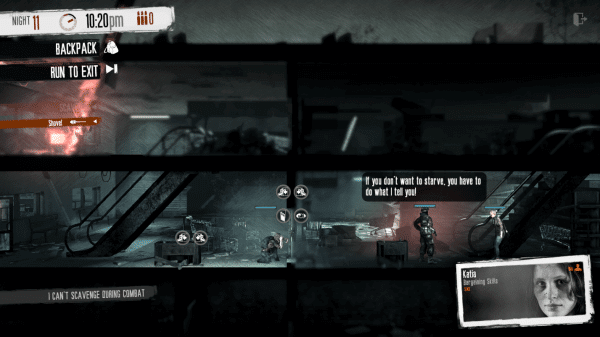 Unfortunately she had taken a bad wound in the struggle. With no bandages left at home she needed to just try to get some rest. Unfortunately Bruno had come down with an illness as well. Katia’s head hit the pillow and she closed her eyes. Katia saw no more….

By morning Bruno was so sick he couldn’t leave bed. We sent Anton out looking for meds. Anton’s wounds hadn’t received any treatment since joining us, and he could barely move. Still, he did his best, but there simply weren’t any supplies to be had anywhere that was still safe. He didn’t find anything. It didn’t really matter though, because Bruno didn’t make it through the night.

Now with just the two newcomers left, Marin had been working day and night keeping the place warm through the winter and keeping it from falling apart, but he was so depressed he stayed in bed all day and the temperature dropped below zero. At night an elderly, severely wounded Anton desperately headed out to scavenge the only place with anything left, the military base. As he slowly limped, dragging his left leg behind him up to the gate, the armed personnel told him to trade or leave. Anton had nothing to trade. Anton had nothing at all. He slowly trudged past them, ignoring their warnings to stop. He heard nothing, all he saw was the crate behind them that might possibly have a scrap of bandage or a rotten carrot. He heard nothing, and then he saw nothing…. It’s a good thing he didn’t see more, because if he had made it home all he would have been met with was the hanging lifeless body of Marin, who had seen enough.

*** Reviewed on PC via a code provided by publisher ***

Next Lego Batman 3: Beyond Gotham Review – The Dark Knight Goes to the Stars
Previous Captain Toad: Treasure Tracker Review – That Loveable Toad Finally Gets His Own Game