I was fully prepared to not like Persona 5 Strikers, coming later this month from Omega Force and P-Studio. Koei Tecmo’s hack and slash franchise, Dynasty Warriors, was never a favorite of mine and when I heard of its influence on this latest Persona offering, I feared I was about to encounter another mindless Dynasty Warriors clone with a Persona skin. That fear, as I have learned, was completely unfounded. Persona 5 Strikers is a deep, multifaceted game experience that respects its Persona roots. Despite the new hack and slash combat, Persona 5 Strikers could legitimately be called a full standalone Persona title, and if you’re a fan of the Persona franchise you’re in for a treat.

Firing up Persona 5 Strikers for the first time, you would think you were playing a sequel to Persona 5. There’s the same infectious jazzy rock soundtrack, and even many of the same songs that wormed their way into your brain in your original playthrough. The flashy, über-cool red, black and white graphic design is back as well, with the menus and transitions all sporting the same look that made Persona 5 so artistically groundbreaking. There’s a deliberate effort in Persona 5 Strikers to make series veterans feel welcome, and it works well.

The Gang’s All Here

Your favorite characters are all back too — Joker, the silent leader of the Phantom Thieves has returned to Tokyo for the summer, four months after the events of Persona 5, and he meets up with the old gang for one more get-together. Morgana, Ann, Ryuji and the rest are all back again, along with two new playable characters, the AI Sophia and Detective Zenkichi Hasegawa. With Joker back, the Phantom Thieves decide to go camping, but their plans are derailed when they discover a new Metaverse ruled by the celebrity Idol Alice Hiiragi. She’s using a phone app called EMMA to suck people into her Jail (an alternative shadow world where she is the ruler).

If you’ve never played Persona 5, you could jump in and learn the basics just by paying attention. However, there is a strong atmosphere of assumed familiarity in Persona 5 Strikers, especially in the character relationships which are so crucial to the group dynamic that puts The Phantom Thieves among my favorite gaming ensembles ever. The rich and massive lore, world and backstory built so painstakingly throughout 5 previous Persona titles is just too important to pass over, and I recommend you go back and invest the obligatory 70+ hours into Persona 5 before tackling this adventure even if you technically don’t have to. 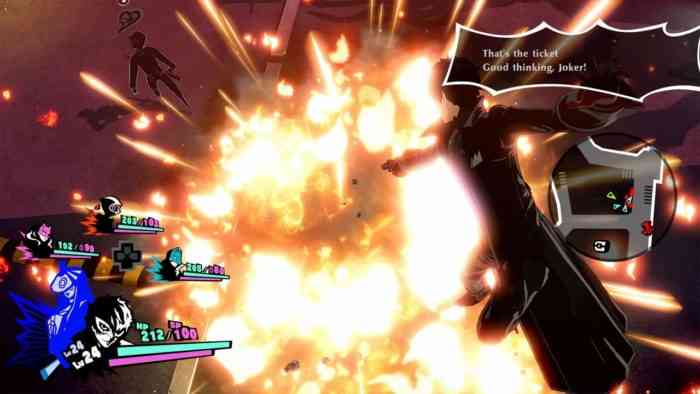 Yes, Persona 5 Strikers is, thankfully, very much a new Persona 5 game, but of course one obvious crucial change is the combat. New real-time hack and slash battles pit you against hordes of Shadows instead of small groups, and there’s at least the visual feel of a Dynasty Warriors game as you deal damage to crowds with wide sweeps as you attack. However, many elements of the original Persona 5’s turn-based style are included as well: Personas can be summoned in battle by whichever character you have selected, and they can be fused just like before by visiting the Velvet Room (which also gives you an excuse to hear that creepy/cool Velvet Room music again). You also once again have the option for All-Out and Showtime attacks, pressing the circle and triangle to finish off weakened enemies with a stylish flourish.

Put it all together and combat in Persona 5 Strikers is smooth, engaging and endlessly satisfying. While if I’m being honest, the hack and slash was my least favorite part of battles, there was enough of what made the original game great to more than make up for it. For one thing, it isn’t completely real-time, and the crucial turn-based aspects thankfully keep battles from devolving into mindless slashfests. You pause the action to unleash Persona attacks, or even do things like use items or heal yourself. There’s elemental damage to consider, and you once again get an advantage if you manage to sneak up on a Shadow to initiate battle. And all those aspects aren’t superfluous additions either. You’ll reach a point where exclusively hacking and slashing won’t be enough to win, and the well-timed use of special tactics and attacks will make the difference between winning and losing.

I say well-timed because your store of SP limits the frequency of Persona and other special actions. And from what I have seen SP is not always easy to come by. I would have liked to see more generous SP allocation from the game in general, but mind you that might just be a reflection of my anti-hack-and-slash prejudice. I didn’t find battles to be punishingly difficult, but there are some challenging Boss Battles, and they will test your resilience and strategy, requiring Persona and other special attacks in addition to regular melee moves in order to bring down. 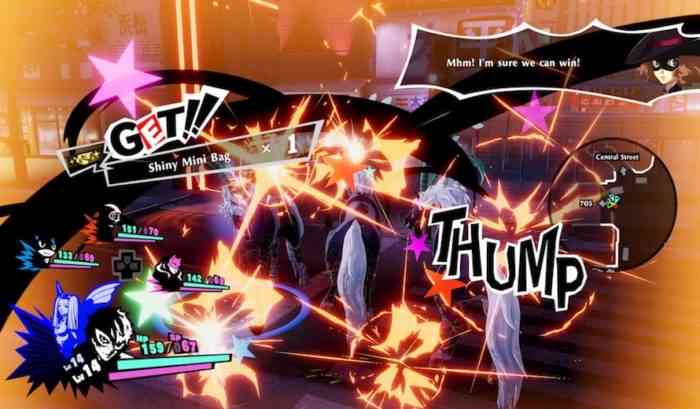 You’ve also got the ability in Persona 5 Strikers to choose your party of up to four characters, and this is another layer of complexity that balances the simple combat notes. Just as with Persona 5, you’ll need to think about personalities and abilities that suit the present situation. Little of these nuanced features are explained from the get-go, an example of Strikers’ default assumption that most players will be series veterans. However, it’s also another way that Persona 5 Strikers encourages you to do more than absentmindedly mash your controller to get through battles.

A second, pretty major change from Persona 5 is the lack of a full “life sim” that made Joker’s routine quite a busy one the first go round. While there is a calendar just like before with each day going by at a regular pace, you don’t have to worry about hanging out with friends to build the Confidant system, and you don’t have to study for an upcoming test, or read books to build your abilities. That makes the calendar much less important in Persona 5 Strikers, and the elimination of the time management aspect of Persona frankly takes some of the depth out of the experience — even if some players might like the feeling of being freed to focus on the core narrative and combat elements. But on the positive side, there is still tons of opportunity for exploration as you jump in and out of Jails located over 6 different Japanese locales, slashing your way to lots of new treasure and goodies to discover.

As a longtime Persona fan, I admit I was very skeptical coming into Persona 5 Strikers for the first time. I worried that the addition of hack and slash combat to the core experience I loved would feel out of place in the well-established Persona universe. But somehow it works, and Persona 5 Strikers is a blast to play. It keeps much of the character and fun of its predecessor while infusing it with some fresh new energy as well. Hanging out with Joker and the rest of the Phantom Thieves once more is every bit the joy it was last time I saw them, and the varied and challenging combat is consistently enthralling from start to finish. Fusing the rich game world of Persona with real-time combat, Omega Force and P-Studio have created a new Persona of their own and it is a worthy addition to a classic franchise.


Brigandine: The Legend of Runersia Marches to Steam Today